- As AUD suffers amid RBA cuts and U.S.-China trade war.

- 'No deal' Brexit downside limited to 4% given AUD losses.

Pound Sterling is likely to rise by more than five percent against the Australian Dollar before year-end and losses in a 'no deal' Brexit scenario might be limited to less than four percent, according to forecasts from Capital Economics.

Sterling has been under the cosh this last week as calls for the resignation of Prime Minister Theresa May grow louder ahead of a fourth vote on her EU withdrawal proposals scheduled for the week of June 03, but Capital Economics forecasts released earlier this week suggested the pain is not yet over.

Leadsome says PM May's Tuesday pitch aimed at securing opposition votes for her EU withdrawal agreement puts deliver of the 2016 referendum result in further doubt, although her resignation is raising fears about the possible collapse of the government.

Further losses are expected because an eviction of PM May from 10 Downing Street risks handing Brexit supporters control over the Brexit process, as the Conservative Party membership strongly supported an EU exit in the referendum and have been up in arms this year over May's Brexit proposals.

But even in spite of this, Capital Economics' base case forecasts imply a five percent gain for the Pound-to-Australian-Dollar rate and suggest that losses will be limted to the low single digits in even the worst case Brexit outcome, which is where the UK defaults to doing business with the EU on World Trade Organization (WTO) terms.

This situation owes itself to a dire outlook for the Australian Dollar itself, which is forecast to wrack up further losses against many of its major rivals before the year is out, with anticipated declines against the safe-haven Japanese Yen amounting to nearly -10%.

"We think that investors will continue to retreat from risky assets this year. This is tied to our view that the global economy will lose momentum, driven by a slowdown in the US and subdued growth in China," says Nikhil Sanghani at Capital Economics. 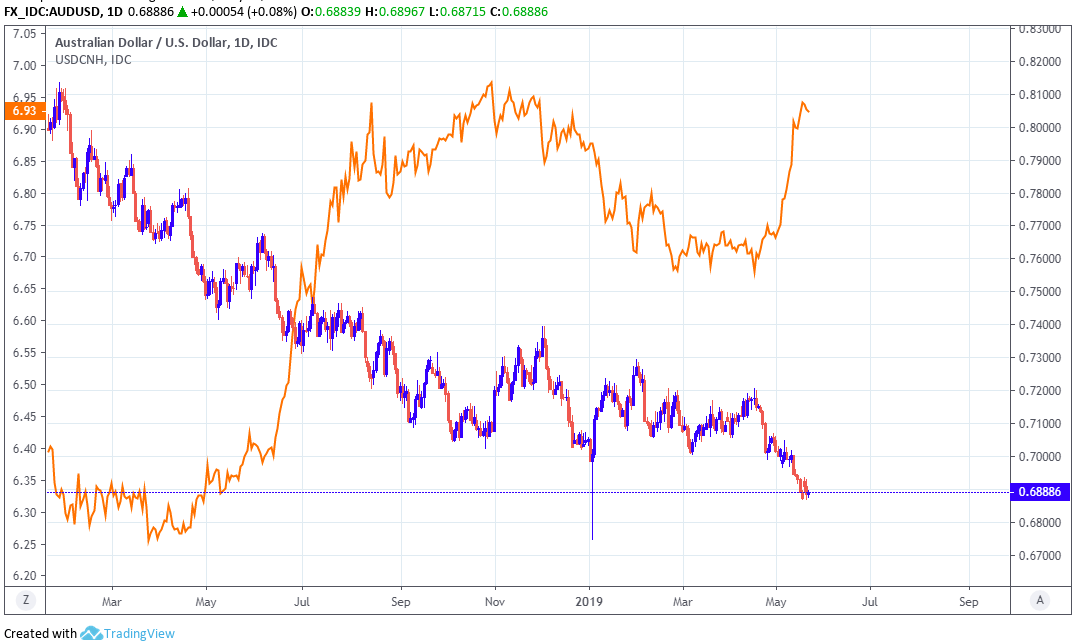 Above: AUD/USD rate alongside USD/CNH rate (orange) at daily intervals.

Australia's Dollar was hobbled again this week after Reserve Bank of Australia Governor Philip Lowe suggested strongly that an interest rate cut could follow the bank's June policy meeting, which would take the cash rate down to a fresh record low of 1.25%.

Financial markets have already baked this into the price of an Australian Dollar but they've not yet fully accounted for the August interest rate cut, to 1%, that economists are now saying follow the initial action from the RBA.

If and when the market gives full credit to the new economist forecasts, the Australian Dollar could fall again. Furthermore, RBA interest rate policy is not the only headwind the Aussie will have to contend with over the coming months.

The U.S.-China trade war has also weighed heavily on the Antipodean currency throughout May and is expected to do further damage before a lasting truce is reached between the world's two largest economies. 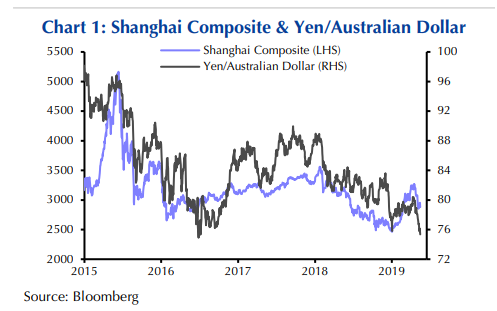 This is after President Donald Trump raised from 10% to 25% the tariff levied on around $200 bn of annual imports from China, prompting a retaliation in relation to $60 bn of Chinese imports from the U.S.

Trump has also set the ball rolling on a process that could see a 25% tariff imposed on China's remaining $300 bn of exports to the U.S. and rhetoric from both governments has been increasingly hostile of late.

This could hurt the Chinese economy and currency, driving the USD/CNH rate higher. And Australia's Dollar has demonstrated a perfect negative correlation with USD/CNH ever since the trade war began in 2018. In the last month the AUD/USD rate has declined -4.16% while USD/CNH has risen 4%.

Sanghani calculates his AUD/JPY projection using a standard equation for deriving cross-rate forecasts, which in this case is the division of the AUD/USD rate over the JPY/USD rate.

However, if that same equation is applied to Capital Economics' GBP/USD and AUD/USD forecasts, it produces an implied Pound-to-Australian-Dollar forecast of 1.92 for year-end 2019.

Furthermore, if Capital Economics' GBP/USD forecast for a 'no deal' Brexit scenario is inserted into the same equation in place of the base-case Sterling projection, the implied rate for year-end becomes 1.76. That's only -4.2% below Wednesday's market price of 1.8380.

The London-based consultancy forecasts that Pound Sterling would be likely to fall to 1.15 against the Dollar, from 1.2680 Wednesday, in the event of an EU exit on WTO terms. Readers can catch up with the latest developments in the Brexit process and their possible implications for Pound Sterling here.