- Lower-than-expected inflation to weigh on Aussie

- Reserve Bank to probably cut rates in May meeting

A low first quarter inflation rate has strengthened the case for Reserve Bank of Australia (RBA) to cut its interest rate, which will have the knock-on effect of weakening the Australian Dollar, says asset manager AMP Capital.

Data out on Wednesday showed inflation falling to only 1.3% in Q1, which was well below the expected 1.5%, and a full half a percent below the result for the previous quarter (Q4) when inflation came out at 1.8%.

AMP Capital says a lot of the decline can be put down to changes in petrol prices but that a sizeable part of the price weakness also came through in core inflation rate, which cannot be attributed to price fluctuations on international energy markets.

“The RBA’s inflation forecasts are looking way too optimistic and will likely be downgraded again in next month’s Statement on Monetary Policy,” says Dr Shane Oliver, chief economist at AMP. “As a result, while it’s a close call we now see the RBA undertaking the first of the two rate cuts we expect this year in May.”

Lower interest rates are generally negative for the local currency because they can make a  country less attractive as a destination for foreign capital flows. Investors tend to prefer jurisdictions and currencies that offer the most favourable interest returns.

While the RBA would probably prefer to wait till after the general election on Saturday, 18 May, and also prefer to see a deterioration in the labour market before it contemplates cutting rates, the inflation figures were so low they may feel compelled to go ahead and cut rates at their next meeting on May 07 anyway. 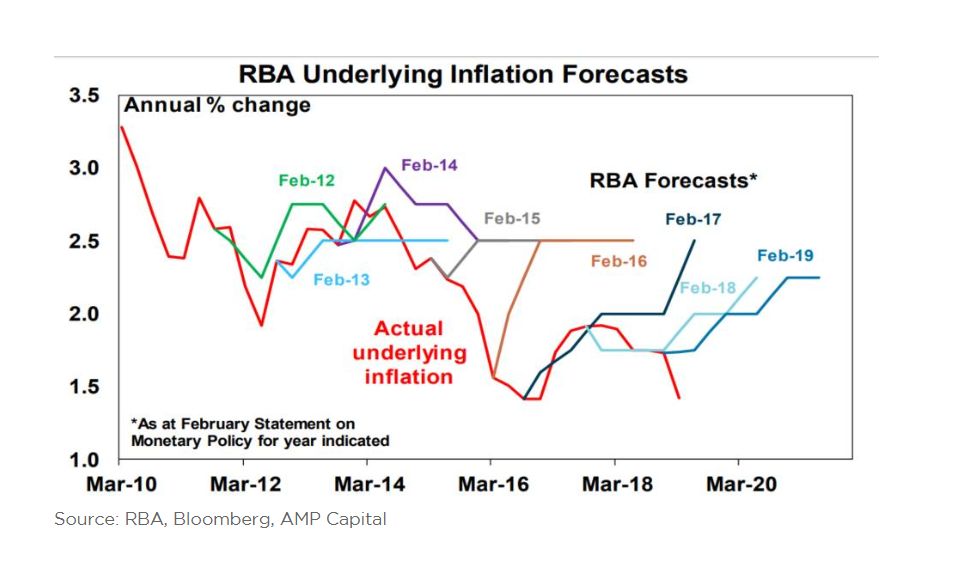 The Australian labour market has been a central pillar of support for the economy of late as it has remained strong despite other areas such as housing and GDP growth remaining subdued. Indeed the disparity between the strong labour market and weaker other sectors has been a subject of much debate and controversy in Australia.

Recently, deputy governor of the RBA Guy Debelle spoke about these issues to the American Chamber of Commerce in Adelaide, arguing that the strong labour market was a reason to not be overly pessimistic about the economy.

His speech helped to reposition RBA policy expectations to a neutral ‘wait-and-see’ setting, spurring a rise in the Aussie Dollar. He said the strong labour market, for example, means the threat of negative equity in the housing market is not being realised via bank repossessions because households generally have at least one member in work.

Inflation remains low because businesses are finding it hard to increase prices. This is mainly put down to too much ‘spare capacity’ in the economy, which is a byword for idle workers and production factors, as well as intense competition in the retail sector.

“The longer inflation undershoots the 2-3% target, the greater the risk that the target will lose credibility,” says Dr. Oliver. “This, in turn, will see low inflation expectations become more entrenched making it in turn even harder to get inflation back to target and leave Australia vulnerable to slipping into deflation during the next economic downturn.”

One option proposed to deal with perennially low inflation is to jettison the 2-3% target as unrealistic. However, this would see “inflation targeting lose all credibility and only lock in low inflation (and the risk of deflation) for longer,” says Dr. Oliver.

Although the much-improved outlook for the Chinese economy is one factor that is likely to support the Australian economy given their close trade ties, and raise inflation (via higher commodity prices) in the future, AMP’s Oliver still sees the Aussie Dollar weakening substantially because of lower relative interest rates.

“The $A is likely to fall into the $US0.60s as the gap between the RBA’s cash rate and the US Fed Funds rate will likely push further into negative territory as the RBA moves to cut rates. Excessive $A short positions and high commodity prices will likely prevent an $A crash though,” says the economist.