Pound Sterling has staged an impressive recovery against the US Dollar over the past 24 hours. What's behind the move?

It has been a spectacular, if confusing, period of play for the Pound against the US Dollar.

According to the Bureau of Labour Statistics, January inflation data showed headline inflation rose by 2.1% compared to the same time in 2017, which was higher than the 1.9% analysts had forecast.

The result was all the more surprising because of the high oil prices in January a year ago which was seen as difficult to beat this January. Following the result, the Dollar rose against the Pound and Euro as higher inflation raised expectations of a quickening in interest rate rises from the Federal Reserve, the body tasked with managing inflation.

Higher interest rates, in turn, are a driver of the Dollar as they attract greater flows of foreign capital drawn by the prospect of higher returns.

The monthly rate of inflation also beat expectations of 0.4% by rising 0.5% instead in January compared to December. Core inflation, which cuts out volatile food and fuel components, rose 1.9% also beating expectations of 1.8%.

The Dollar's initial reaction was textbook in nature. So why then the sudden reversal of fortunes?

Emmanuel Ng, a foreign exchange analyst with OCBC Bank in Singapore tells us that the broader market narrative is important in considering the Dollar reaction: "despite warmer than expected US Jan CPI readings (headline and core), the dollar wiped out against the majors on Wednesday despite an earlier blip higher. With investors instead focusing on risk appetite dynamics, the DXY eventually crashed and slipped below 89.00 to an 88.94 low."

The DXY is the Dollar index - a measure of broadbased Dollar strength based on its performance against a basket of currencies.

So have we now decided that strong inflation is NOT bad for the stock market?

We are getting through narratives faster than plates in a Greek restauarant.

"A sharp bounce in global equities (including EM equities) and commodities plus firmer UST and most other core govie curves we think may have continued to power positive risk appetite mechanics, continuing to put the greenback at a disadvantage," says Ng, adding:

"GBP/USD managed to surface above 1.4000 in the face of broad Dollar bearishness on Wednesday. Despite slightly capped short term implied valuations, a supported range may continue to prevail with key support expected into 1.3900." 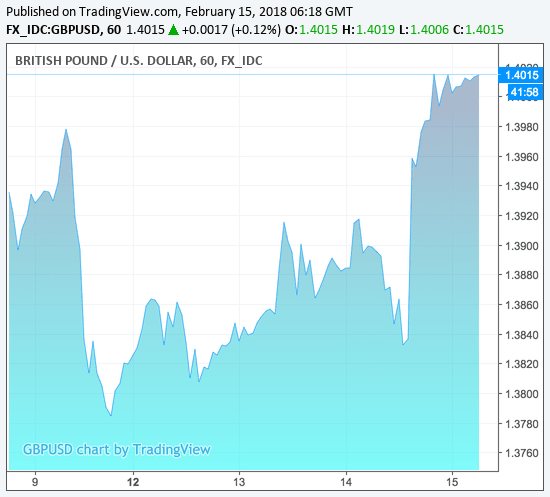 Above: The Pound bounces back against the Dollar, despite US inflation data suggesting the Dollar should have gone higher. (C) Pound Sterling Live.

"For today, aggregated rate differentials in favor of the USD may continue to be sidelined in the near term if investors persist in riding on the back of the positive risk appetite wagon," says Ng.