The Dollar lost value heading into the midweek session after hawkish remarks from Federal Reserve (Fed) officials were followed by a wave of profit-taking that weighed on U.S. exchange rates ahead of the imminent Wednesday release of inflation data for December.

Dollar exchange rates opened near the week’s lows on Wednesday after Tuesday’s remarks from Fed Chairman Jerome Powell and other members of the Federal Open Market Committee (FOMC) were followed by widespread and heavy losses that some analysts attributed to profit-taking.

“The catalyst for today’s move is nothing more than a simple re-balancing of extant USD positions. To be precise, long USD against most currencies has been the consensus view for months now,” said Bipan Rai, North American head of FX strategy at CIBC Capital markets.

Chairman Powell confirmed at his renomination hearing in Congress on Tuesday that the accelerated winding down of the Fed’s quantitative easing programme could be followed by a rate rise as soon as March, and that the Fed Funds rate is likely to rise as many as three times this year.

“With Powell/George/Mester/Bostic all sounding hawkish today, and a March hike now in the price, some fast money looks to be taking profit on the long USD view for the time being,” CIBC’s Rai also said in a note to clients on Tuesday. 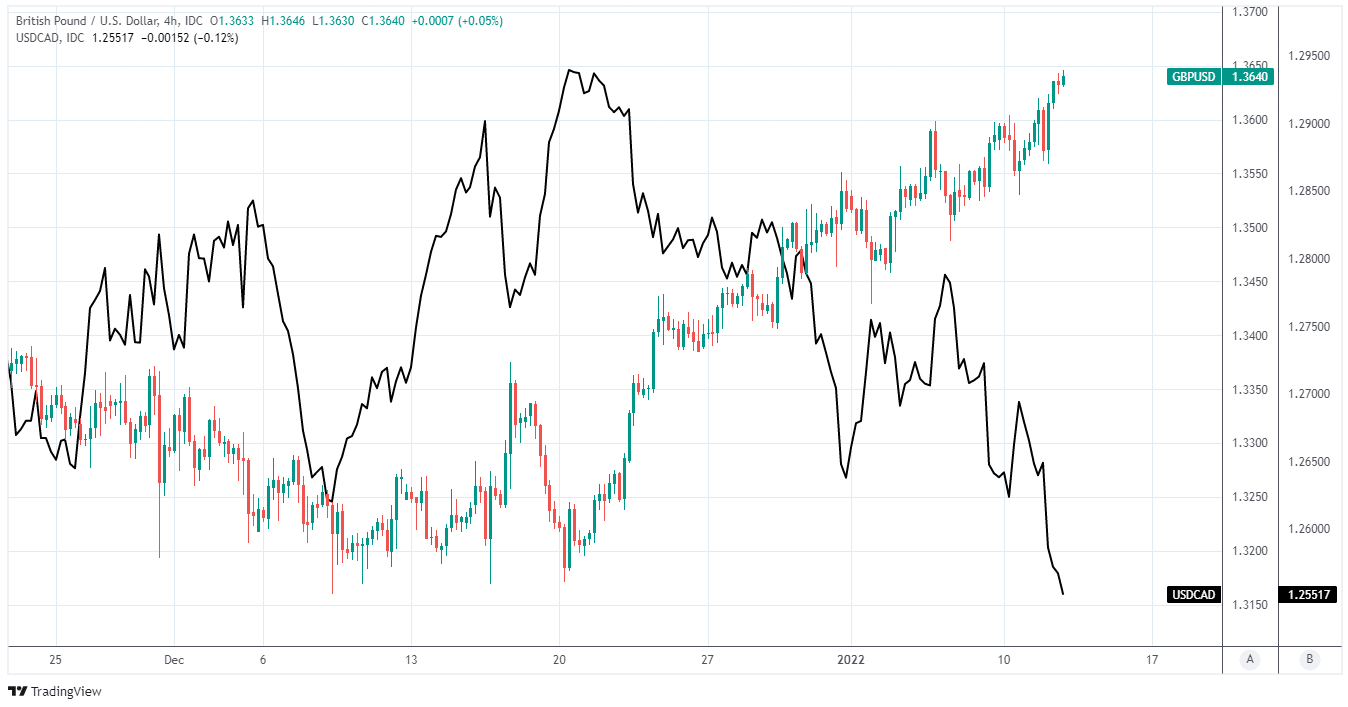 Above: Pound-Dollar rate shown at 4-hour intervals alongside USD/CAD.

Many U.S. Dollar exchange rates had risen to open the new week on Monday and were still carrying hefty gains from the prior six months when investors built up large wagers on the greenback in anticipation of a normalisation of Fed monetary policy that is now underway.

“The Fed chair's words seemed to validate market expectations for rate hikes to start as soon as March, with QT to follow before too long. We now expect a first rate hike in March, instead of June. As before, we expect tightening actions to continue on a quarterly basis after the first move, through the end of 2023,” says Mazen Issa, a senior FX strategist at TD Securities.

“Powell's renomination hearing confirmed what the market had already priced in, which was an impatient Fed. Consequently, we do not expect March liftoff to materially change the tone in the FX complex. While we see some scope for risk and high beta FX relief, the funding currencies remain challenged to outmuscle the dollar at this time,” Issa and colleagues said in a note to clients on Tuesday.

Financial markets had already effectively taken three 2022 interest rate rises to the bank before Chairman Powell confirmed they were likely on Tuesday while the Dollar itself had struggled thus far in the new year to reestablish the momentum it had before its ascent slowed in December.

This may be why many analysts attributed Tuesday’s losses to profit-taking among speculative traders, which could potentially continue for a while longer and especially if December’s U.S. inflation data happens to surprise on the downside of market expectations at 13:30 on Wednesday.

“Today also sees US inflation, which might have ended 2021 over 7% y/y. Who saw that coming? Not the economy, as the NFIB survey just showed 22% of US small firms saying inflation is their main problem, up from 1% this time last year,” says Michael Every, a global strategist at Rabobank. 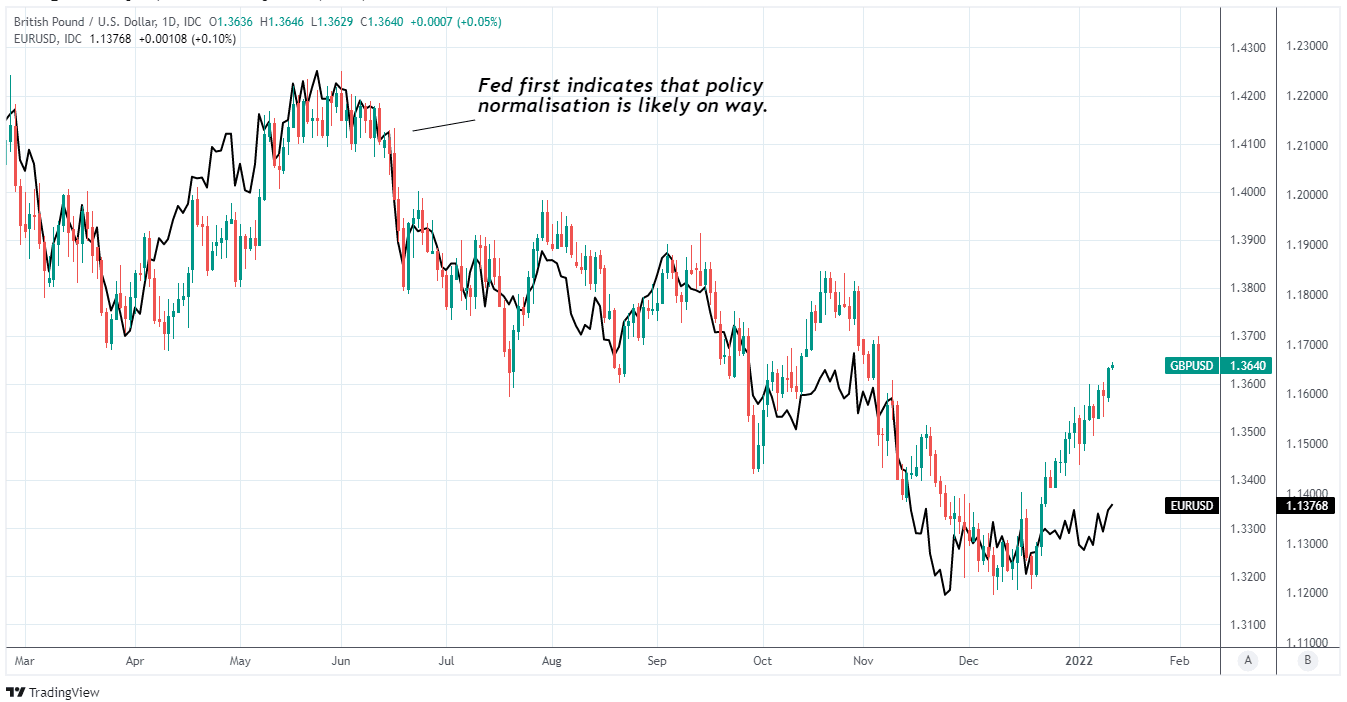 Above: Pound-Dollar rate shown at daily intervals alongside EUR/USD

Inflation surged above six percent in October and rose further in November, leaving it at more than three times the targeted level and prompting the Fed to announce in December that it would accelerate the winding down of its quantitative easing programme so that it ends in March rather than June.

“There’s risk on both sides really on growth and potentially on inflation as well. We’re going to have to be very attentive to what’s happening in the economy and willing to adapt pretty nimbly our policy as well as we go through the year,” Chairman Powell said of the outlook on Tuesday.

“Right now our policy is very highly accommodative so we’re stimulating. We’re not restraining demand at all at this place. We’re trying to get to a place where we’re more neutral, and perhaps tight if it’s appropriate,” Chairman Powell also said. 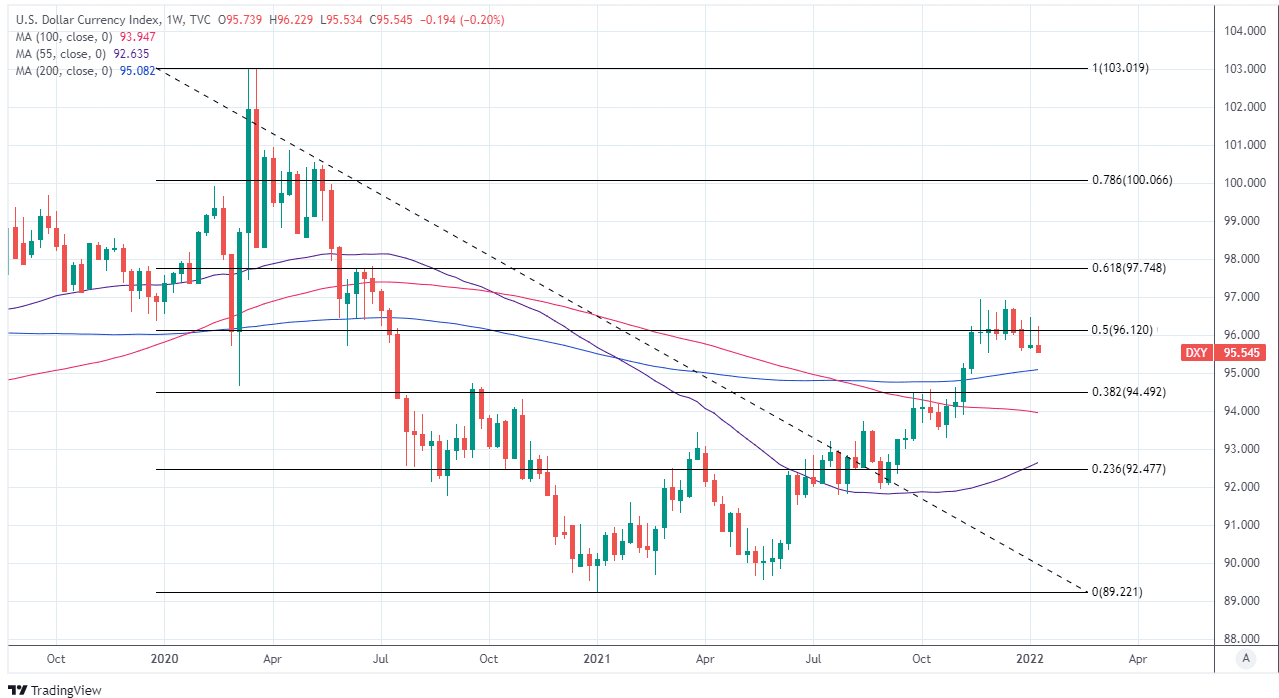 The vast bulk of price increases have been driven by non-monetary factors like disruption of global goods supply chains caused by governmental responses to the coronavirus, although record low interest rates are aggravating and exacerbating price pressures.

This is why Chairman Powell said on Tuesday that the Fed is attempting to get back to what is known as the “neutral rate” of interest, which is estimated to be around 2.5%, as this is how far the benchmark would have to rise in order for Fed policy to no longer exacerbate price pressures.

That in turn is why the recent U.S. Dollar rally is likely a long way from over even if it does continue to be pushed lower by profit-taking in the short-term, as the financial markets haven’t yet come close to pricing-in a return of the Fed Funds rate to this kind of a level.

“We’re still holding firm to our view that USD/CAD will eventually resolve higher and make an attempt at the 1.30 mark in the second half of this year,” CIBC Capital Markets’ Rai said on Tuesday.

“The market continues to price the Fed’s terminal rate too low (at 160-170bps) when it really should be closer to 250bps. Indeed, we see the market adding in a few more hikes to the USD OIS curve in 2023 and 2024 in the coming months,” Rai and colleagues also said.