Above: Powell was appointed by Trump who upended an apolitical tradtion by not reppointing Janet Yellen as Fed Chair to a second term. File photograph, The White House.

The U.S. Dollar was higher against the Pound, Euro and a host of other currencies in the wake of news U.S. President Joe Biden has reappointed Jerome Powell as Chair of the US. Federal Reserve.

However, any knee-jerk reactions to the decision is likely to be faded by a foreign exchange market that will see the call as maintaining the status quo for Fed policy.

Powell will be deputised by Lael Brainard, a favourite amongst some quarters of the Democratic Party, who was tipped as having a strong chance of replacing her current boss.

The odds of a Brainard appointment were elevated on the basis Powell is a Republican appointed into the role by Donald Trump.

"President Biden has ignored calls from progressives in his party to replace Jerome Powell as Fed Chair and has instead nominated him for a second term," says James Knightley, Chief International Economist at ING Bank N.V.

"This decision also removes uncertainty with Powell’s current term ending in February. Had there been any delay in appointing a new Chair due to a lack of political support this could have caused significant financial market nervousness," he adds.

The bid to the Dollar following Biden's decision suggests an element of the market was positioned for a surprise whereby Brainard was appointed.

Brainard was seen as being more 'dovish' in stance, i.e. likely to be more cautious on raising interest rates in an attempt to maximise employment gains.

Such a stance would typically be considered a headwind to the Dollar. 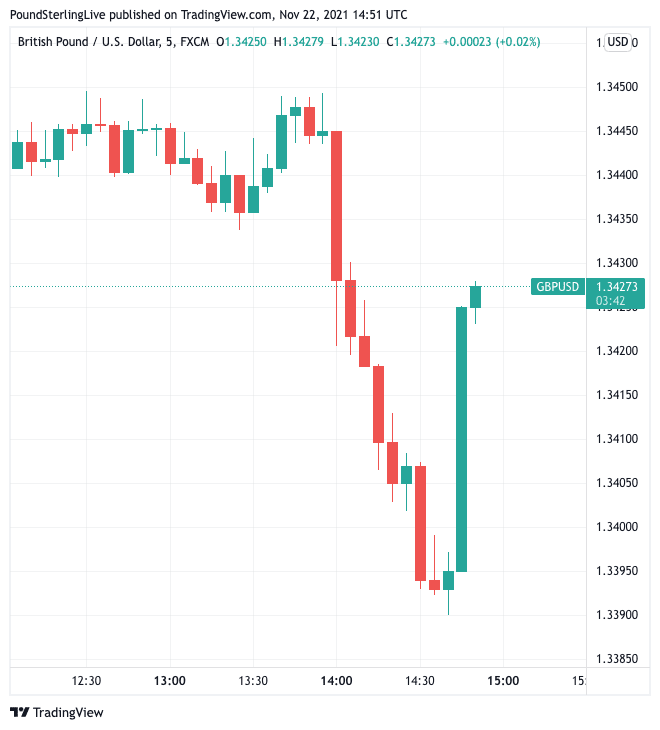 But as the above chart shows the initial reaction was soon faded, and is consistent with a view that a more enduring market impact is unlikely.

"There seems to have been something of a Brainard trade which is being unwound, or perhaps it’s just the kind of market overreaction to an unpriceable bit of news which is good to fade," says Neil Wilson, Chief Market Analyst at Markets.com.

Ultimately, for Biden the politics of reappointing Powell who would likely be keen to avoid any further headaches coming out of Congress.

"Biden would not have wanted another battle of attrition that diverts him from achieving his policy agenda since this Fed role requires Congressional approval," says Knightley.

ING maintains the overall policy thrust leaves the Fed on course to wind down its quantitative easing programme over coming months and likely hike interest rates in 2022.

"Markets like the continuity – we know what we are getting with Powell, the market is confident in his leadership, and Brainard will be an effective deputy and mouthpiece in a similar fashion to the outgoing Clarida," says Market.com's Wilson.

"Given the enormous tasks facing the Fed, this is a plus that should not be underestimated. After all, the Fed needs to bring high inflation rates back under control, and this could involve painful decisions. A Fed caught in the middle of the political crossfire would find this task even more difficult than it already is," says Bernd Weidensteiner, Senior Economist at Commerzbank.