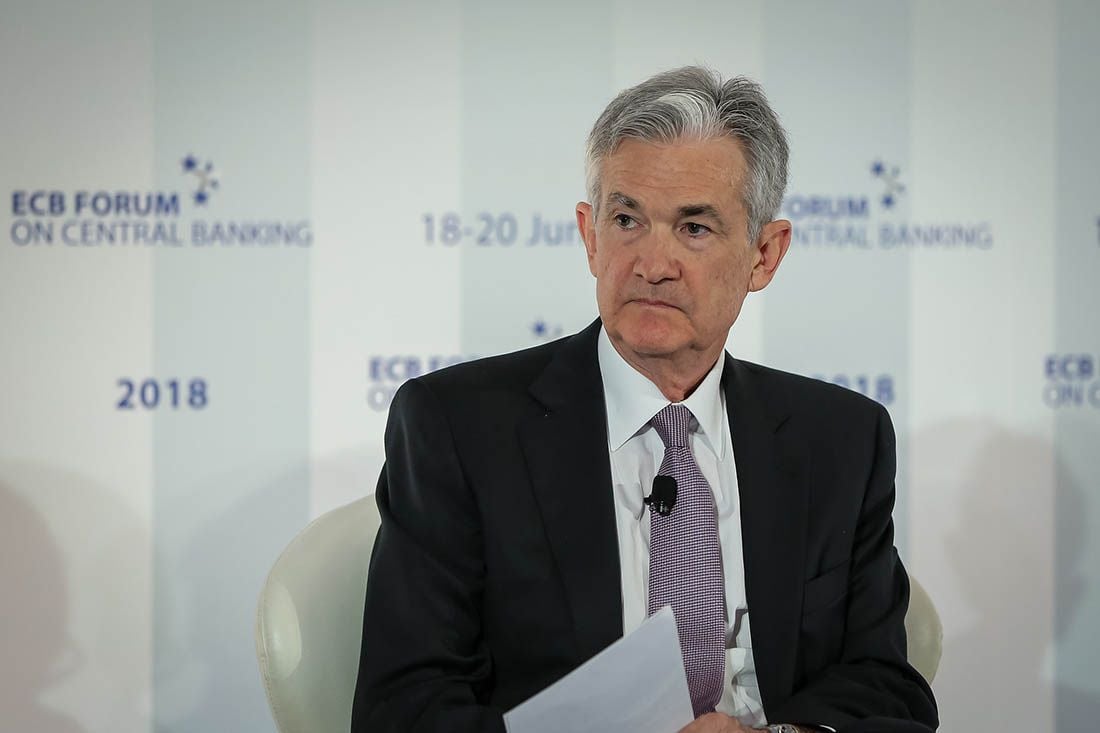 Federal Reserve Chair Jerome Powell will address the Jackson Hole conference at 15:00 BST where he is expected to touch on the outlook for U.S. monetary policy, the outcome of which could set in place foreign exchange market trends for the following weeks.

"Much of the summer has been spent awaiting the Fed’s Jackson Hole Economic Symposium for further clues to the taper timeline," says says George Davis, Chief Technical Strategist at RBC Capital Markets.

"A bullish bias remains in place for the USD," he adds.

Ahead of the address the Pound-to-Dollar exchange rate is seen at 1.3714, having risen 0.68% this week, which is not enough to recoup the sizeable 1.76% loss recorded in the week prior.

The market has built up high expectations of the event (which in itself could be a source of disappointment if Powell chooses to bypass monetary policy altogether) and are wanting Powell to directly address the Fed's plans for reducing Covid-crisis stimulus support.

This will be achieved first by tapering the quantitative easing programme, which when complete will allow for interest rate hikes.

The specifics the markets are seeking involve the month in which tapering will start, and how aggressive it will be from this point.

"We expect the dollar to find some support if Powell simply endorses the prospects of a fall tapering as the Delta-variant impact is somewhat downplayed," says Francesco Pesole, FX Strategist at ING Bank. 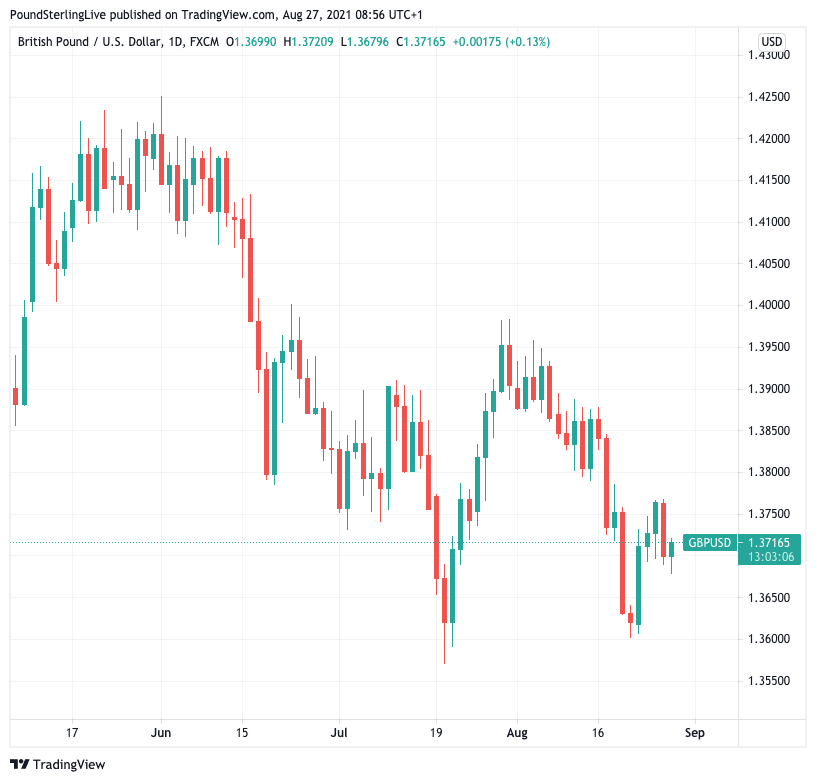 Above: The Dollar has appreciated against the Pound since June, in anticipation of a 'taper'.

A Dollar-supportive outcome would involve Powell confirming the September Federal Reserve Open Market Committee (FOMC) meeting will involve an announcement on the tapering programme, allowing for an actual commencement in November.

The Pound would also be at risk of losses against the Euro in this instance.

"The higher sensitivity of GBP compared to the EUR to market risk sentiment has driven EUR/GBP
marginally higher," says Pesole.

Pesole says for today the the risks for Pound appear still slightly skewed to the downside against the Euro "if the Fed confirms imminent tapering, which could ultimately take a toll on activity currencies more than on funding currencies".

He says we could witness a break below 1.1627 in GBP/EUR, but adds that he does do not see any strong fundamental base to drive the pair sustainably lower for now.

But the Jackson Hole symposium comes amidst rising Covid cases in the U.S. and data suggesting the U.S. economic recovery is slowing, which could prompt a more cautious approach from Powell. 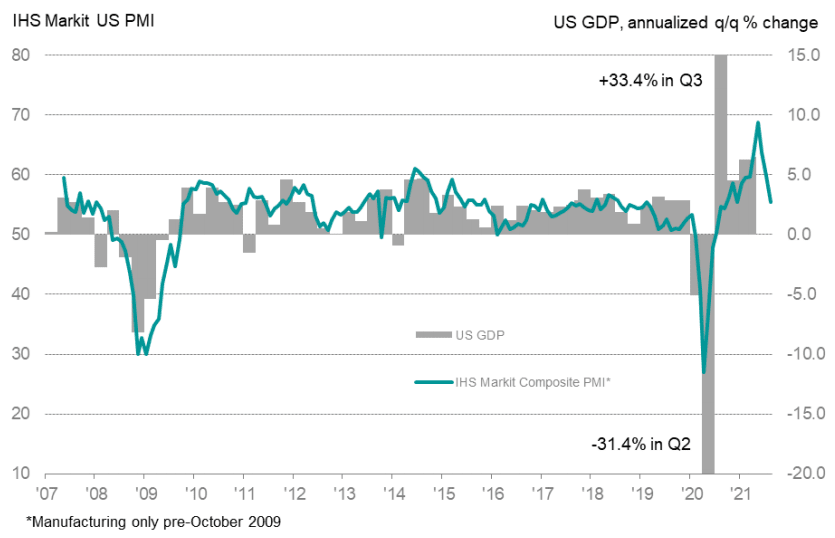 Above: Incoming PMI data hints at a slowing in U.S. economic growth.

"While recent comments from various Fed officials suggest that they are more comfortable moving on to
the taper runway, there is some skepticism that the Fed will provide more specific information around a timetable for takeoff at the Symposium amidst a rise in Delta variant COVID cases," says Davis.

"This could push the focus out to the September FOMC meeting," he adds.

This could disappoint Dollar bulls and offer the likes of GBP/USD and EUR/USD the opportunity to advance. 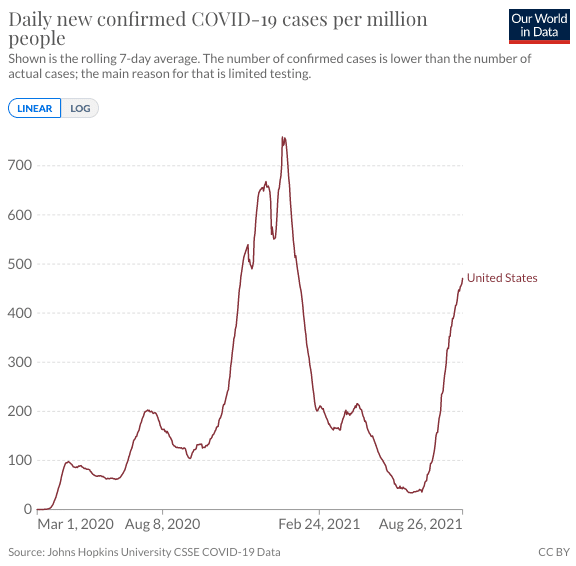 "Powell would be wise to keep his options open and not give any clear tapering guidance today," says Pär Magnusson, Senior Rate Strategist at Swedbank AB.

Magnusson notes the U.S. interest rate market (bond yields) have risen of late in anticipation of a 'hawkish' message from Powell, which is a fundamentally supportive development for USD exchange rates.

Any 'flattening' of yields could in turn pressure the Dollar.

"The recent uptick in 10yr USD rates seems to have frontrunned a hawkish message. The risk-reward in favour of a USD curve flattening in the wake of Jackson Hole has thus improved a bit," says Magnusson.

"The U.S. Dollar is likely to start edging down against several currencies in the near future," says Jean.

This scenario sees Desjardin's economists assume the new wave of Covid-19 in the U.S. will end up having little effect on the economy and that uncertainty will slowly wane.

"The next announcements on upcoming cuts to asset purchases should have less of an impact on the U.S. dollar, as they seem to be priced in already," says Jean.

The Fed has tapered before: in December 2013 it was announced quantitative easing would slow from $85BN per month in 2013 ($45BN in Treasury bonds and $40BN in mortgage-backed securities) down to $75BN per month.

The process of winding down quantitative easing was completed by December 2014.

At present the Fed is buying assets to the tune of $120BN per month ($80BN in Treasury bonds and USD $40BN in agency mortgage-backed securities).

Consensus expects the Fed to taper asset purchases by $15BN per month, allowing for completion in 8 months, putting the prospect of a 2022 interest rate rise in reach.