The Dollar remained an outperformer on Friday although its strength was abating after February non-farm payrolls report revealed a sharp increase in new jobs last month, around the same time as trade balance data showed U.S. imports growing faster than exports in the New Year.

There were 379k jobs that were either created or recovered from the coronavirus last month, Bureau of Labor Statistics data showed Friday, which added further to an upwardly revised increase from January and was almost twice the 197k consensus estimate.

"The US labor market came roaring back in February as states moved to re-open and Covid cases continued to fall," says Katherine Judge, an economist at CIBC Capital Markets. "States have continued to relax social distancing restrictions, while the pace of vaccinations is accelerating and there is another dose of fiscal stimulus on the way, suggesting that the recovery will gain momentum from here."

Revised January data was as notable given that it saw the BLS scrap an earlier estimate of a paltry 49k gain for the New Year, before restating it as +166k following receipt of information not available at the time of the initial report. 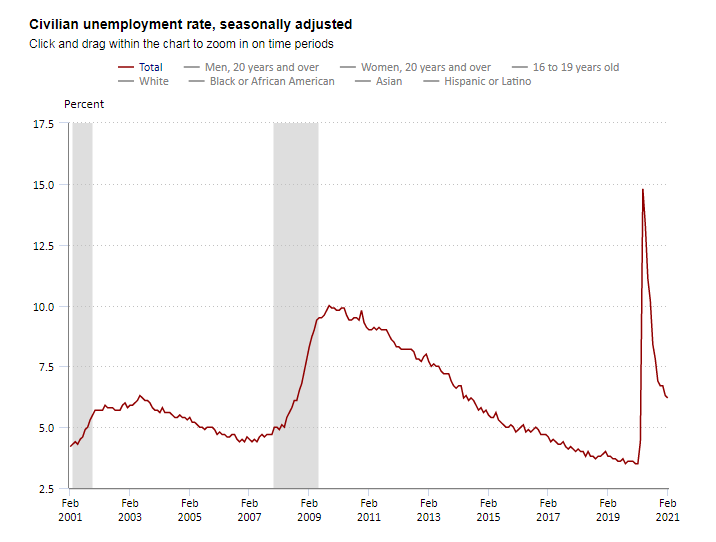 Job gains saw the unemployment rate fall from 6.3% to 6.2% in a month where so-called 'participation' was unchanged at an estimated 61.4%. Rising participation can artificially inflate the jobless rate, while declines can have the effect of compressing it. The full report can be found here.

"The U.S. trade balance widened $1.2 billion to a deficit of $68.2 billion in January. The data indicate global trade is slowly coming back online. But because the U.S. economy is generally rebounding faster than most of its trading partners, imports are generally outpacing exports. Supply-chain bottlenecks may be a headwind to the recovery in global trade this year," says Jay Bryson, chief economist at Wells Fargo.

Separately but at the same time the Bureau of Economic Analysis said the U.S. trade balance fell from -$67bn in December to -$68.2bn in January after the Dollar value of GDP-eating imports grew faster than the value of GDP-enhancing exports. The full trade report can be found here.

Exports to the rest of the world grew 1% to $191.9bn in January while imports rose 1.2% to a larger $260.2bn, leading to a balance that was in deficit to the tune of $68.2bn. A rising deficit is perceived by analysts as a sign of economic recovery, but implies an increasing supply of Dollars on the market. 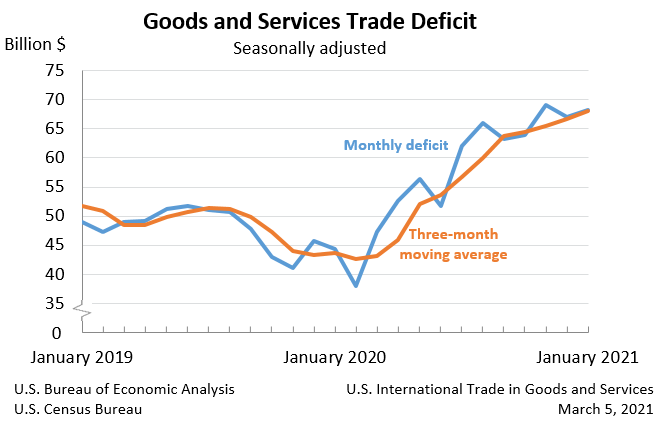 The ICE Dollar Index had been trading 0.60% higher and above the 92.0 handle ahead of the release but had chopped that gain back to around 0.30% in the wake of it. The paring back of earlier strength was most notable in relation to the oil-linked Canadian Dollar and Norwegian Krone.

U.S. stock markets turned higher in the wake of the data, leading them to intraday gains as other benchmarks elsewhere in the world lagged behind. Meanwhile, Pound Sterling was the underperformer for the session, with -0.58% Pound-Dollar rate leading the move lower.

"The USD continues to strengthen, it’s recent rally given extra impetus by Fed Chair Powell’s observations yesterday. In truth, there was nothing especially new in terms of his tone, but judging by the spike in yields in the wake of Mr Powell’s speech, the bond market was clearly looking for more," says Daragh Maher, U.S. head of FX strategy at HSBC. "His characterisation of how the Fed is looking at the bond market moves echoed that offered by his colleague Lael Brainard earlier in the week. Hence the rise in yields is noteworthy but not troubling, and would only provoke a reaction were it to become disorderly or persistent enough to hamper progress to the Fed’s goals." 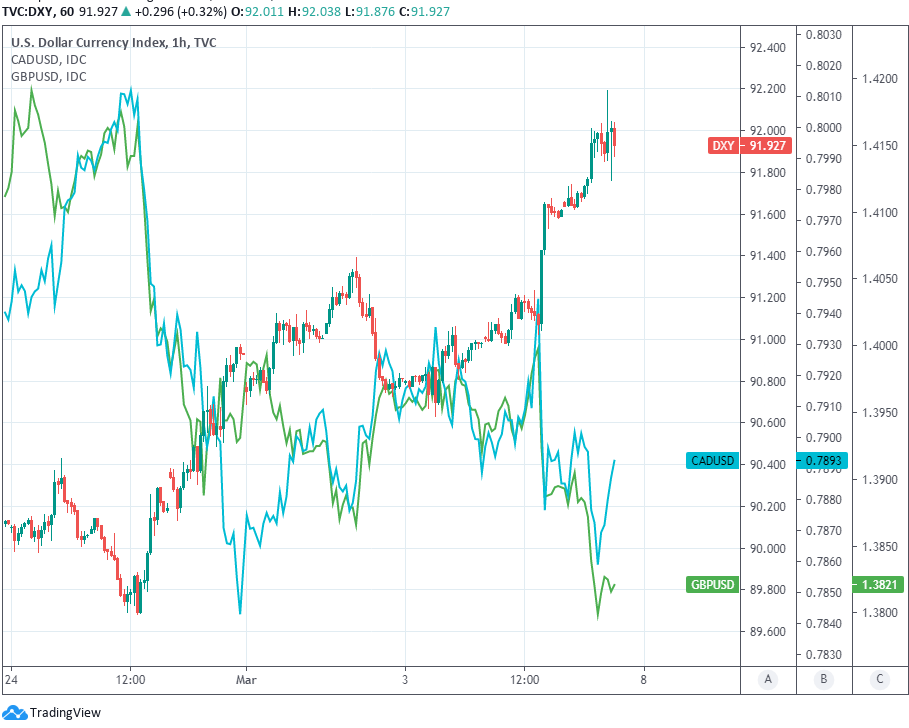