- Tory poll lead may be peaking, decline to weigh on GBP.

- Labour may close gap with offers of new 'free' services.

- Narrowing polls risk of another hung parliament at best.

- "Radical change" for "the many and not the few" at worst.

The Pound-to-Dollar rate rallied into the weekend Friday after the Brexit Party of stalwart eurosceptic Nigel Farage stood down more candidates in order to aid the governing Conservative Party in December's election but Sterling is still being billed as a buy-on-dips by some traders in the City.

Brexit Party candidates have been stood down in another 43 parliamentary seats across the country ahead of the December 12 election, further improving Prime Minister Boris Johnson's perceived chances of securing a parliamentary majority for the Conservative Party next month.

That takes the total number of withdrawn candidates close to 400 and might mean the newly founded party is a lesser threat to the Conservatives, who claim that only they can deliver 'Brexit' and keep opposition Labour Party leader Jeremy Corbyn out of 10 Downing Street. Conservative MPs and activists say that would bring Venezualan style socialism to UK shores while the Labour Party itself is  promising voters "radical change for the many and not the few". 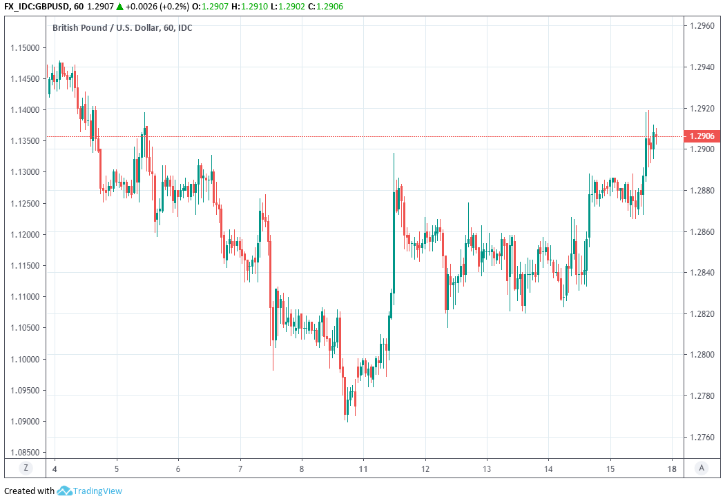 Nair said Friday morning that earlier decisions by the Brexit Party and/or its candidates to withdraw from three marginal seats in which the governing Conservatives are locked in a reportedly tight race with Labour. And with Labour no longer pretending to want anything other than a new referendum on EU membership, election strategists say the 'leave vote' should flock to the Conservatives in those areas where the Brexit Party has withdrawn.

Those comments were followed in the noon hours by the broader withdrawal from 43 seats, which boosted the Pound-Dollar rate but not by enough to void Nair's earlier tip that the exchange rate could ultimately target the 1.2980 level and above. However, and as much as there is broad agreement in the City that a Conservative Party majority is probably for Sterling the most favourable of all possible electoral outcomes, many are also becoming more cautious in their outlook for the Pound over the short-term.

“The odds have shifted more in favour of a Tory election victory. Further reduction in political risk premium is probable, helping the pound, but some signs of Labour party poll gains and the macro backdrop will limit the upside,” says Derek Halpenny, head of research, global markets EMEA and international securities at MUFG, in response to Friday's Brexit Party decision.

Halpenny and the MUFG team advocated last week that clients of the bank bet on a short-term decline in the Pound-Dollar rate from 1.2815 to 1.26, with an upward move to 1.30 cited as a walk-away or 'stop-loss' level. The latter has not been hit and is above even Nair's 1.2990 horizon. 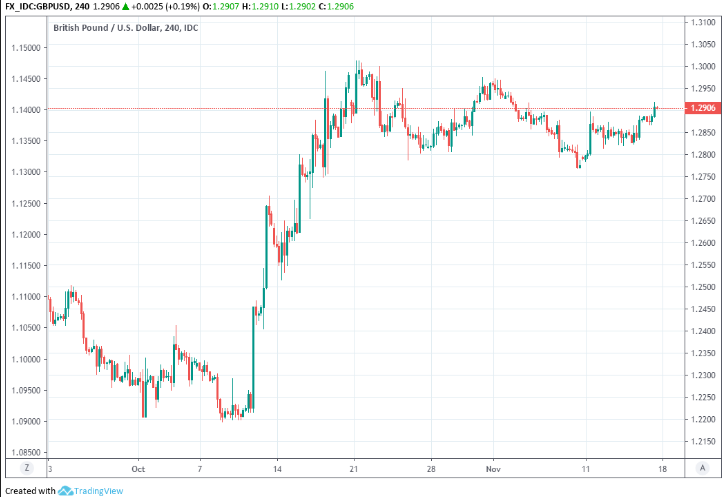 MUFG has a bullish view on Sterling over the medium-term but anticipates a slide in the Conservative poll lead that weighs on the British currency in the weeks ahead. That view is gaining traction elsewhere too.

RBC Capital Markets said Friday that Pound Sterling is looking "overbought" against the Dollar before warning that it's vulnerable to declines in the weeks ahead. Nomura has been betting against the Pound for weeks now. It said Thursday the market's 'base case' is for a Conservative minority government or small majority and that it's also waiting for the party's polling lead to shrink.

The Friday evening closing level of the Pound-Dollar rate could also be instructive of next week's price action, according to UBS' Nair, with a hold above 1.29 likely to put the exchange rate on course for more gains next week, while a finish below would risk encouraging a retreat over the coming days. The Pound-Dollar rate was quoted at 1.2905 around the 'London close', but the market remains open until 22:00 London time, which is the 'New York close'.

"Markets have not fully priced in the Conservatives winning the general election on 12th December and securing a Brexit deal, if that were to happen we suspect the pound would climb from $1.28 now to $1.35, 10-year gilt yields could rise from 0.76% now to 1.50% by the end of 2021 and domestically-focused equities would outperform the internationally-exposed," says Paul Dales, chief UK economist at Capital Economics. 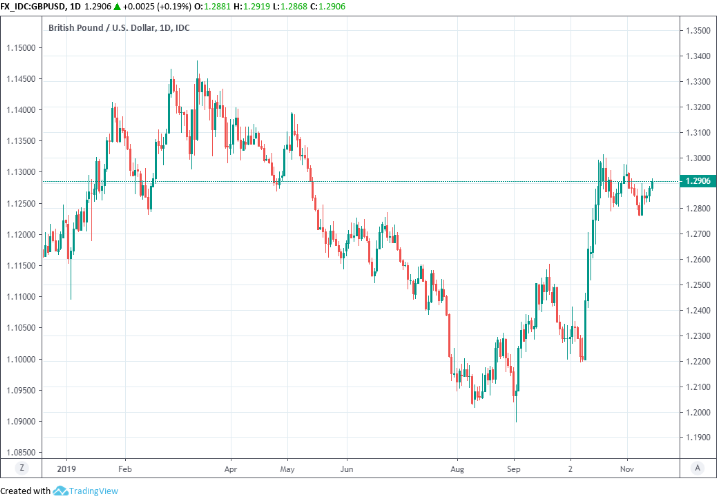 A controversial figure in UK politics, the Labour Party's Jeremy Corbyn has made a career out of opposing the free market economy, has a profligate attitude to the public finances and has indicated at times that he might have a doubtful commitment to private property rights. He pledged Friday to nationalise the BT Group 'Openreach' broadband network and make it "free" for everybody, a measure which the company itself says would cost as much as £100 bn.

£100 bn is almost 5% of the £2.1 trillion of gross-domestic-product (GDP) produced by the UK last year. Corbyn claims his pledge will be made possible by heavier taxation of technology companies but critics say those taxes would be unfair and potentially self-defeating as they wouldn't necessarily generate higher tax revenues. They could, for instance, result in loss of foreign tech services currently available in the UK or be otherwise circumvented.

"Victory for the Labour Party could result in the pound falling back to $1.25, gilt yields rising even further and equity prices declining," Dales says. "The boost to the pound if a Labour government led to a softer Brexit deal or no Brexit at all would probably be offset by concerns that Labour’s other policies would make the UK a less attractive place to invest. Meanwhile, a Brexit deal could lead to the pound rising from $1.28 now to about $1.35."

The Openreach nationalisation is just one of many that have been proposed and the nationalisation agenda itself is but a fraction of the "radical change" envisaged by Labour, the leadership of which tends to cast the country as being mired in a simplistic zero-sum-game kind of conflict between the 'poor' and the 'rich' who're almost always billed as "the many" and "the few".

Bloomberg News recited this week the story of France's notorious and unsuccessful increase of a 'wealth tax' that produced very little additional revenue for the Treasury. The flimsy correlation between tax rates and income is why some politicians favour lower rates as a means of increasing total income.