- Morgan Stanley a buyer of GBP/USD of December election.

- GBP valuation said to be attractive on a medium-term basis.

- Election polls and BoE dovishness likely to weigh up ahead.

The Pound rose against all rivals at the beginning of the new week as Prime Minister Boris Johnson's chances of securing a majority in the December election were seen improving although the outlook for the British currency continues to divide opinion in the City.

Pound Sterling rose significantly against all major rivals in the opening session of the week after stalwart eurosceptic Nigel Farage said his Brexit Party will no longer stand candidates in any parliamentary seats where there is an incumbent Conservative Party MP, leaving Prime Minister Johnson's MPs as the only game in town for Brexit-backing voters in those constituencies.

The decision reduces the risk that either of the parties will 'split the leave vote' in the general election scheduled for Thursday 12, December, which would otherwise create scope for a divisions within the Brexit camp to elevate a coalition of anti-Brexit parties into government. Liberal Democrats have long pledged to do away with the UK's exit from the EU while the Labour Party after years of prevarication, says it wants to negotiate a new exit agreement before giving voters a choice between that and 'remain'.

"We see two realistic outcomes:either a Conservative-led government which will deliver PM Johnson's deal and then negotiate a new FTA, or a Labour-led government which will legislate for a second referendum between a softer customs union Brexit and Remain. Across all scenarios, the risk of no-deal outcome remains low," says Hans Redeker, head of FX strategy at Morgan Stanley. "Current GBP valuations look cheap on a medium-term horizon." 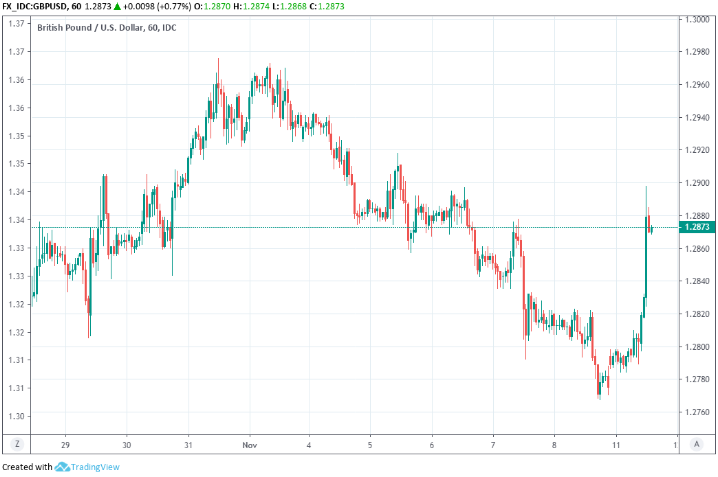 Brexit has been delayed three times to date and with global growth slowing markedly in recent quarters, the UK economy has increasingly shown signs that it's struggling with the burden of chronic uncertainty about the country's future trade arrangements with some of its largest partners. That uncertainty has sent business confidence through the floor and weighed on investment, and the household side of the economy hasn't been left unscathed either.

Redeker and the Morgan Stanley team bought the Pound-to-Dollar rate when it was trading around 1.27 in mid-October and are targeting a move up to 1.3350 over the coming months, which would put the British currency at its highest level against the greenback since March 2019. They anticipate that if Brexit happens at all it will be via the agreement struck by Boris Johnson last month.

"We remain buyers of GBP dips despite the BoE’s dovish shift. Ultimately, the BoE is still looking to lift rates modestly in the event of global growth stabilizing and an orderly Brexit transition – a scenario which we think is likely to materialize," Redeker says. "[We] see the chance of a no-deal outcome remaining small, hence GBP looks cheap on a medium-term basis, though the near-term trajectory may be largely determined by election opinion polls." 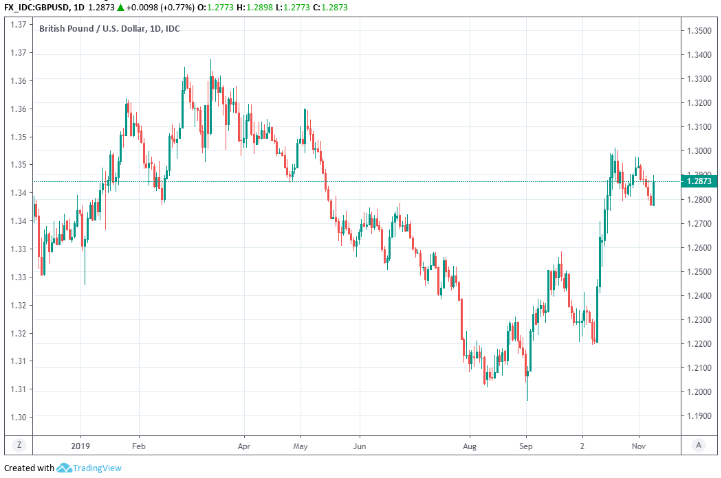 Johnson's deal provides a semblance of certainty about future economic arrangements and has all but buried the threat of a 'no deal' Brexit in the dirt. However, the American investment bank also concedes that Sterling is likely to be driven most by movements in the election opinion polls over the coming weeks rather than anything else, which could see the Pound come under pressure as the vote approaches if the Conservative Party poll lead narrows.

There is abnormally high uncertainty about the outcome of the forthcoming election because of the unprecedented divide in society over Brexit and due to the presence of the Brexit Party on the electoral field, not to mention because of alliances and non-aggression pacts that are being struck on either side of the Brexit divide. MUFG, the world's fifth largest bank and a significant foreign exchange dealer, last week cited a narrowing poll lead as one reason for telling clients to sell the Pound-Dollar rate.

"Our short-term Yield-based regression model indicates that GBP does have some political risk premium in the price but the poor start to the election campaign by the Tories raises the prospect of some evidence in weekend polling data to reveal that the Labour Party has closed the gap on the Tories," says Derek Halpenny, European head of global markets research at MUFG, in a note to clients ahead of the weekend. 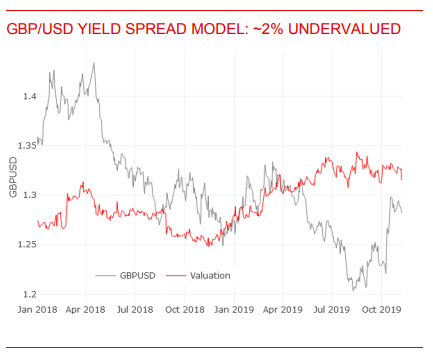 Halpenny and the MUFG team forecast a steady climb by the Pound over the coming year but like Morgan Stanley, have one eye on the opinion polls and told clients last week to consider selling the Pound-to-Dollar rate in the short-term. They sold Sterling at 1.2815 and are targeting a move down to 1.26, a level not seen since early October, in anticipation of pre-election jitters weighing on the currency but they forecast  Sterling will rise to 1.3430 by June 2020.

MUFG says a Johnson victory would support the Pound but that polls could show support for the Prime Minister waning ahead of the vote. They've also warned that the currency could now become more sensitive to poor economic data because the Bank of England (BoE) has hinted strongly that it might cut interest rates in the months ahead. The BoE cited Brexit uncertainty and the global slowdown last week for why it's no longer so confident that interest rates will need to rise in the years ahead.

"The outcome from the BoE surprise dovish shift yesterday could be that the pound is more sensitive to weak data releases in the weeks ahead. Labour market momentum has certainly weakened and confirmation of that next week would reinforce GBP selling pressure. The BoE forecasts GDP growth picking up from 1.2% this year to 1.4% next year – but Governor Carney admitted downside risks yesterday. We would agree. Finally, speculative short positioning amongst leveraged accounts remains modest pointing to scope for fresh selling ahead," Halpenny says. 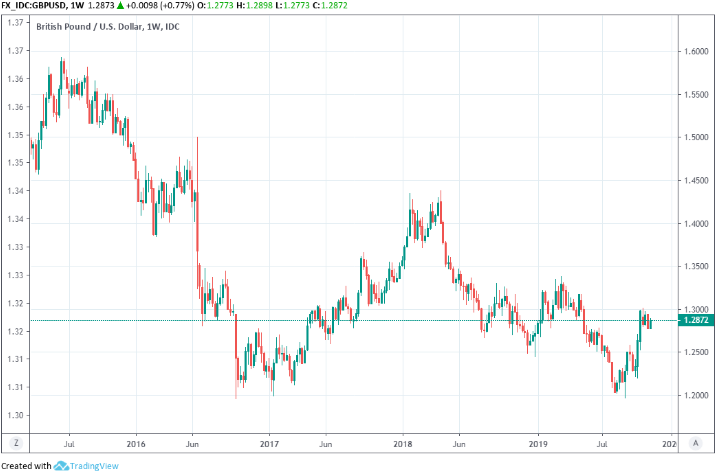 Adding insult to injury two out of nine Bank of England rate setters voted last week for an immediate cut of Bank Rate from 0.75% to 0.5%, surprising the market and prompting investors to price-in a greater chance of a rate cut being delivered in the next 12 months. MUFG forecasts a cut in the second quarter of 2020 and although investors have priced that into the Pound since the BoE's statement there's a danger they could feel compelled to go further if the economic news-flow worsens.

Office for National Statistics data revealed on Monday that the economy avoided a brush with recession in the third quarter although the 0.3% rebound from the 0.1% contraction seen previously was underwhelming at best. That outcome was below the 0.4% forecast of both the market as well as the BoE, although there are more key figures due out later in the week, with jobs data as well as estimates of inflation and retail sales due out on Tuesday through to Thursday.

"We remain buyers of GBP dips despite the BoE’s dovish shift. Ultimately, the BoE is still looking to lift rates modestly in the event of global growth stabilizing and an orderly Brexit transition – a scenario which we think is likely to materialize. Markets are already pricing in a ~80% chance of a BoE rate cut by end-2020, so risk/reward favors GBP upside. In our view, Brexit continues to be the key determinant of GBP valuation," says Morgan Stanley's Redeker.