- GBP hit by confluence of election and 'no deal' Brexit fears.

- As U.S. investors respond to tariffs after Labor Day weekend.

Pound Sterling was volatile Tuesday, briefly hitting a new two-year low before recovering in the noon session, as the Brexit saga rolled on in London and the greenback rose in the first U.S. trading session following a Labor Day weekend that saw new White House tariffs imposed on Chinese goods.

The Pound has been hit by confluence of Brexit and general election fears as rebels within the governing Conservative Party prepare to side with the opposition in a bid to hijack the parliamentary agenda and tie the government's hands behind its back. They've tabled draft legislation that seeks to force the government to request from the EU an extension of the Article 50 negotiating period, with the draft bill also requiring the Prime Minister to accept any length of extension put forward by Brussels.

There is significant uncertainty over whether they will succeed because the move requires support from at least six Conservative MPs, while there is further uncertainty over whether the government would be able and willing to prevent any succesful bill from becoming law. But the process is making an election more likely, and so-far without providing any certainty about whether a 'no deal' Brexit will be prevented.

"We think that the upper hand rests with the Prime Minister, and the extension Bill is unlikely to succeed. This means the most likely scenario this week is a lot of fireworks and obscure legal and political procedures, but the status quo of Parliament prorogued until October 14th, and Brexit still penciled in for October 31st," says James Rossiter, head of macro strategy at TD Securities.

Prime Minister Boris Johnson is planning to suspend parliament from September 12 and until October 14, when a Queen's Speech will be held, in what Downing Street says is a legitimate move that has domestic purposes but which critics claim is an attempt to force through a 'no deal' Brexit. He has staked his premiership on a pledge to take the UK out of the EU on October 31 regardless of whether formal arrangements have been agreed with it, which could mean a 'no deal' Brexit in less than two months time.

The curret EU withdrawal agreement has a long list of serious flaws, according to its critics among both Brexit-supporting and anti-Brexit MPs, but most controversial of which is the so-called Northern Irish 'backstop'. Johnson is aiming at having it removed from the treaty because it could ultimately force lawmakers into choosing between a technical breakup of the UK or allowing all of the country to become trapped in the EU's legislative and regulatory orbit on a potentially indefinite basis and without any control over those things.

"Boris Johnson’s threat to call a snap general election has left the pound caught between a rock and a hard place. While a lot of bad news already seems baked into sterling, the downside risks to the currency seem to be building," says Olliver Allen at Capital Economics. "A general election is not yet a certainty. But what seem the two most likely outcomes – a majority for Mr Johnson, or a Corbyn-led government – would probably both be negative for the pound." 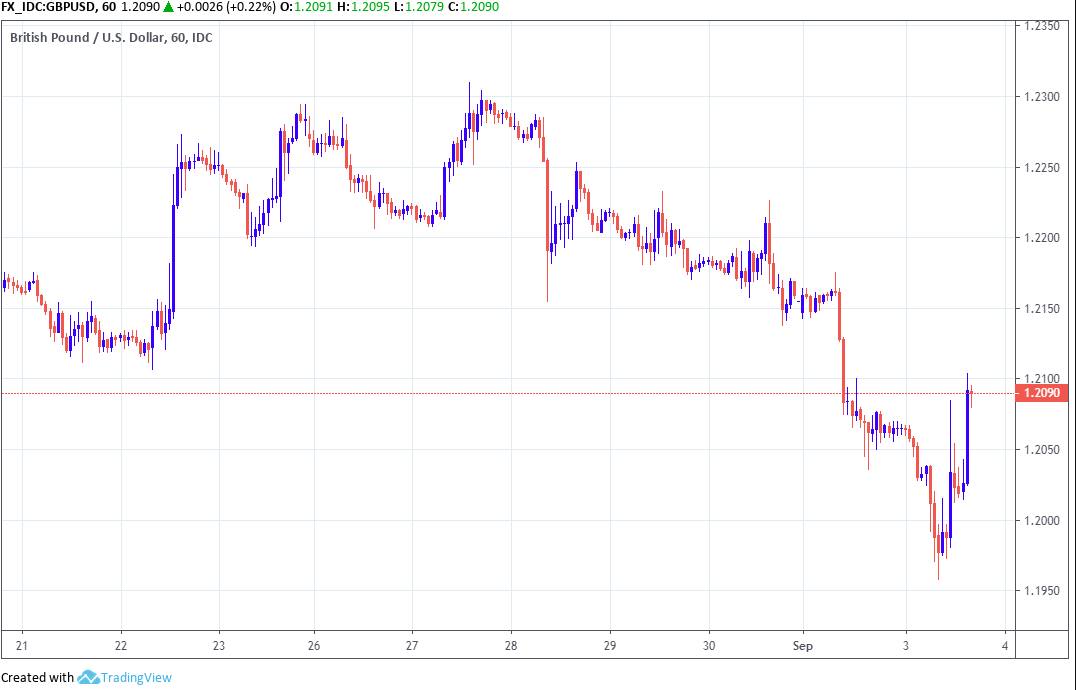 Sterling suffered steep losses during the morning session as a result of the uncertainty but was boosted during the noon hours. The recovery rally came after the resignation of the an MP who was key to the government's one seat majority, meaning it has now lost its majority, but just hours before MPs vote on whether to tie the government's hands. One analyst says the earlier losses accounted for some of Tuesday's gains in the Dollar Index.

"The GBP occupies a 12% weight in the DXY, so in simple weighted-average terms we can say that the decline in GBPUSD is responsible for about 20% of the move higher in the DXY this morning, given the 0.65% decline in that currency pair," says Stephen Gallo, European head of FX strategy at BMO Capital Markets. "It now seems to us that some permutation involving early elections and/or a WTO Brexit is beyond a shadow of a doubt."

Gallo says it's all downhill for the Pound-to-Dollar rate from here and forecasts Sterling to move at least as low as the 1.16 level before year-end due to the deteriorating political backdrop, which has hamstrung the economy for much of 2019 with a form of limbo over exactly what kind of arrangements will govern international trade with the EU, which includes several of the UK's largest export markets, after October 31. However, he also warns that his forecast is "laden with downside risks".

"It seems quite likely that Remain parliamentarians will attempt to force the government into an Article-50 extension if they can grab control of the legislative agenda today. To the best of our knowledge, BoJo has already refused to request one from Brussels, so that means either the opposition will table a "no confidence" motion or BoJo will engineer one himself," Gallo warns. 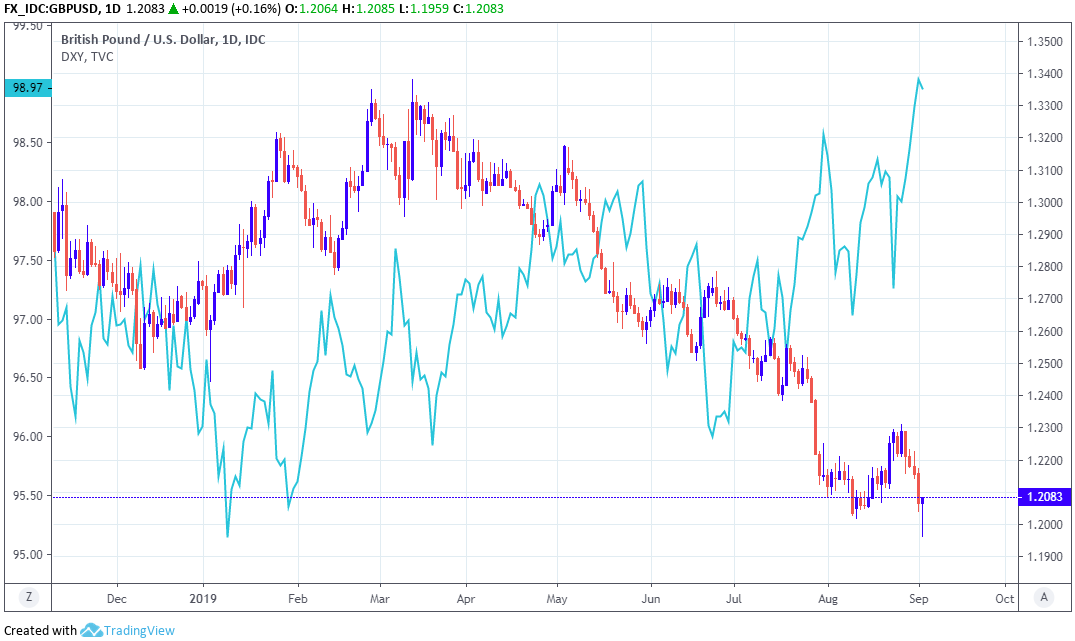 Tuesday's price action in Pound Sterling comes amid broad gains for the U.S. Dollar, which was in demand in a risk-off market that saw safe-haven currencies and gold bid higher while oil futures and stock markets slipped lower. The session is the first for U.S. investors this week, who returned to work Tuesday following the Labor Day weekend. They're now digesting the Sunday decision to move ahead with new tariffs on Chinese goods.

President Donald Trump went ahead Sunday with a new 15% tariff on another $112 bn of goods imported from China each year, which takes the total value of China's exports now covered by punitive levies above the $360 bn level, although there's still a further $190 bn worth of tariffs scheduled to take effect on December 15. China has retaliated with a tariff of its own on around $75 bn of imports from the U.S., although its capacity to respond is constrained by the fact it has a significant trade surplus with the U.S.

The two sides have been warring with tariffs and other policy tools over the latter's "unfair" trading practices since the first quarter of 2018 and with the White House facing an election year in 2020, it's under pressure to secure a victory and cannot afford to lose face in the conflict. Global trade, not to mention economic growth, has already fallen as a result of the uncertainty thrown up by the conflict but many now anticipate further weakness ahead.

"If Mr. Trump did not have to face the U.S. electorate, this stalemate could last indefinitely. But he does, and because November 3, 2020, represents a massive threat to his well-being, we think he is more likely to blink than President Xi," says Ian Shepherdson, chief economist at Pantheon Macroeconomics. "By next spring, though, China will have a muchreduced incentive to do a deal, especially if Mr. Trump continues to lag badly in the polls. Why not just wait a few months more for a new administration." 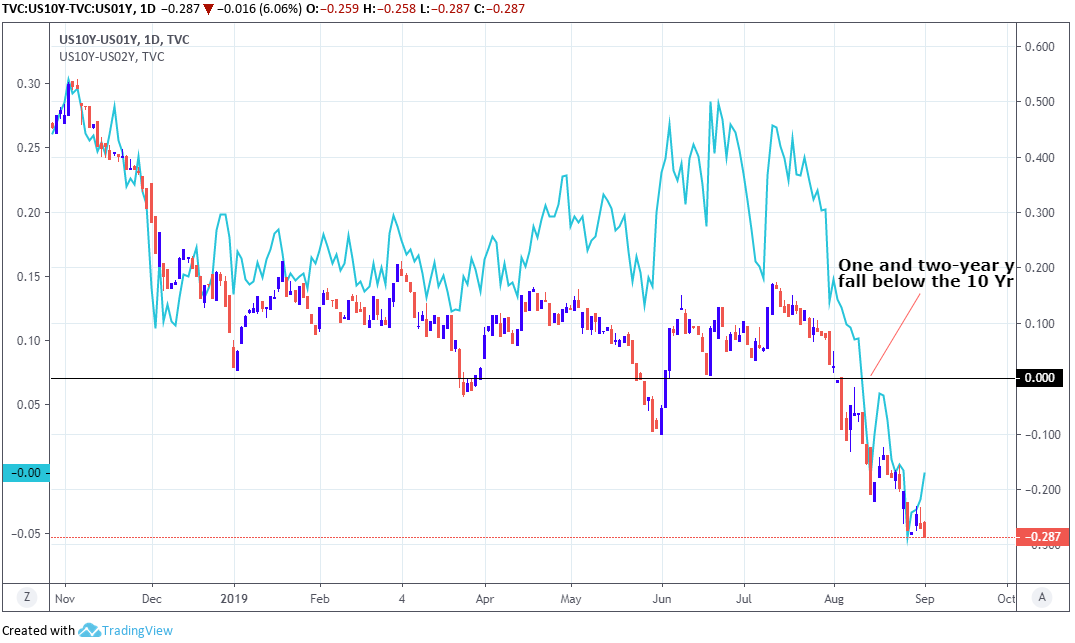 Shepherdson says a de-escalation should be likely before next Spring but bond markets are pointing to trouble being ahead for the U.S. and global economies sooner than that. And the Federal Reserve has so-far signalled only limited appetite for responding meaningfully to what are said to be classic signs that a U.S. recession, and potentially a global downturn, are on the way.

"The US treasury yield curve remains inverted at the 1-10 segment. In our view, the inverted yield curve suggests that the US economy will fall into recession in 2020. While the Fed continues to assert that the yield curve has been distorted because of quantitative easing and therefore we should ignore the inversions, we have shown in 'Yield curve inversion: This time is not different' that the Fed’s argument is flawed and contradicted by the data," says Philip Maregy, a strategist at Rabobank.

Investors sold out of the U.S. bond market heading Tuesday, prompting one and two-year yields to rise even further above those of 10-year bonds and driving another inversion of the yield curve, which represents the cost of government borrowing for maturities between one month and 30 years. It inverts when the market is anticipating that interest rates will be lower in the years ahead and is normally seen by analysts and in markets as a warning of recession.

"Bond markets continue to price in Armageddon, a scenario that has some credence but is in large part a manufactured crisis that forces the Fed to steepen the yield curve. For all the doom and gloom out there, the US consumer remains in a solid position," says Mazen Issa, a strategist at TD Securities. "We are not dismissing the downside risks to the outlook (which are concentrated in capex and trade) or a growth slowdown (which we expect and informs our out of consensus Fed easing call), but rather, we think the context is easily forgotten when the bond market panics and recession talk filters through the market."