- GBP slides after Gov moves to 'no deal' Brexit assumption.

- Autumn destination now contest between election and no deal.

The Pound was clobbered in the opening session of the week after the government said it is now working under the assumption the UK will leave the EU in 'no deal' Brexit at the end of October, which has already prompted BMO Capital Markets to downgrade its forecasts for the British currency.

Michael Gove, a cabinet minister carrying the title Chancellor of the Duchy of Lancaster, wrote in the Sunday Times this week that a 'no deal' Brexit is "a very real prospect." He said the government hopes the EU eventually agrees to return to the negotiating table and that it changes its mind on the so-called Northern Irish backstop, but warned the government is operating under the assumption it won't.

Traders saw the comments implying that the threat of defaulting to doing business with the EU on World Trade Organization (WTO) has risen, prompting some to sell the British currency. Previously, the probability of such an exit was perceived to be around 30% but analysts say it's now as high as 50% and that investors will want an increased 'risk premium' in order to own the Pound.

The weekend's developments mean the destination of Sterling in the Autumn months is rapidly shaping up to look like an ugly contest between a damaging election that would risk installing opposition leader Jeremy Corbyn into 10 Downing Street, and a 'no deal' Brexit that many analysts say could see currency fall as low as 1.05 against the Dollar and to parity with the Euro. 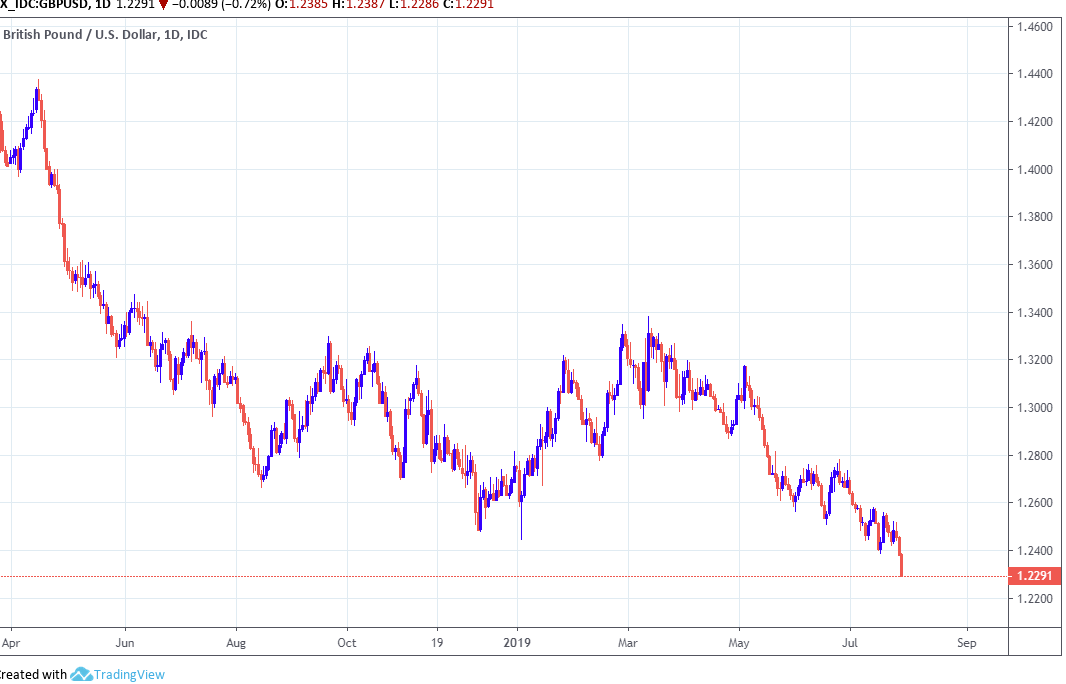 "Even in the unlikely scenario that Brussels is willing to reopen the Withdrawal Agreement, it is almost inconceivable that the UK government and Brussels will be able to reach a deal that could be ratified into UK law by October 31. An extension of the October 31 deadline is still possible, but in that case we cannot see any plausible result except early elections," says Stephen Gallo, European head of FX strategy at BMO Capital Markets.

Newly-minted Prime Minister Boris Johnson claims he'll take the UK out of the EU on October 31 regardless of whether the EU agrees to remove the so-called Northern Irish backstop from Theresa May's withdrawal agreement and renegotiate the broader text, which the EU says it won't do. He neglected to visit European capitals following his inauguration last week and has instead tasked ministers with preparing the country to leave the EU at the end of October.

Johnson pledged repeatedly on the campaign trail to leave the EU on October 31 irrespective of progress in any talks. He's also reported to have told a parliamentary meeting of the European Research Group (ERG) that Theresa May's withdrawal agreement is "dead" itself, not simply just the so-called backstop, which is important because the new EU treaty took the best part of a year to negotiate and there are less than 100 days to go until October 31.

"Some combination of a "no deal" Brexit and/or early elections will probably occur. The two-party system could be breaking down entirely, though much will depend on the mood of the country and how any residual UK/EU negotiations proceed. A political risk discount should remain embedded in the GBP," Gallo writes, in a note to clients. "We have reduced our 3M and 6M GBPUSD views to 1.16 and 1.15 respectively owing to the risks of a "no deal" Brexit and early elections, which could come before year-end."

Opponents of Brexit within parliament including in the governing Conservative Party have claimed they'll bring down the government with a no confidence vote if a 'no deal' Brexit begins to look likely at any point, although parliament is now in recess until early September and research from the House of Commons suggests there isn't much time left for such a vote to take place if an election is to happen before October 31.

The threat to the government is serious because its majority of just two seats is slim and likely to be whittled down to just one on August 01 when the Brecon and Radnorshire byelection takes place on August 01, assuming polls for the ballot are right. Polls suggest the government will lose that seat to the Liberal Democrats, taking its majority down to just one when votes from confidence and supply partners, the Democratic Unionist Party, are included and risking forcing an election sooner or later.

A general election would see all of the UK's main parties compete with each other to offer manifestos that, with Brexit aside, are likely to win votes. In the current political climate that could see parties seeking to outdo each other with pledges over increased budgets for various priorities. It would also risk installing opposition leader Jeremy Corbyn in 10 Downing Street, who markets fear almost as much as Brexit, while creating wider scope for another Scottish independence referendum.

"It increasingly looks like the Boris Johnson government is embarking on an overt policy of brinkmanship, specifically designed to take the Nigel Farage Brexit Party out of the equation ahead of a likely election this autumn, and ultimately with the aim of forcing the EU back to the negotiating table. Whilst the bulk of this move is happening on the GBP side...we should also point to renewed dollar strength," says Mark Wilson at Markets.com. 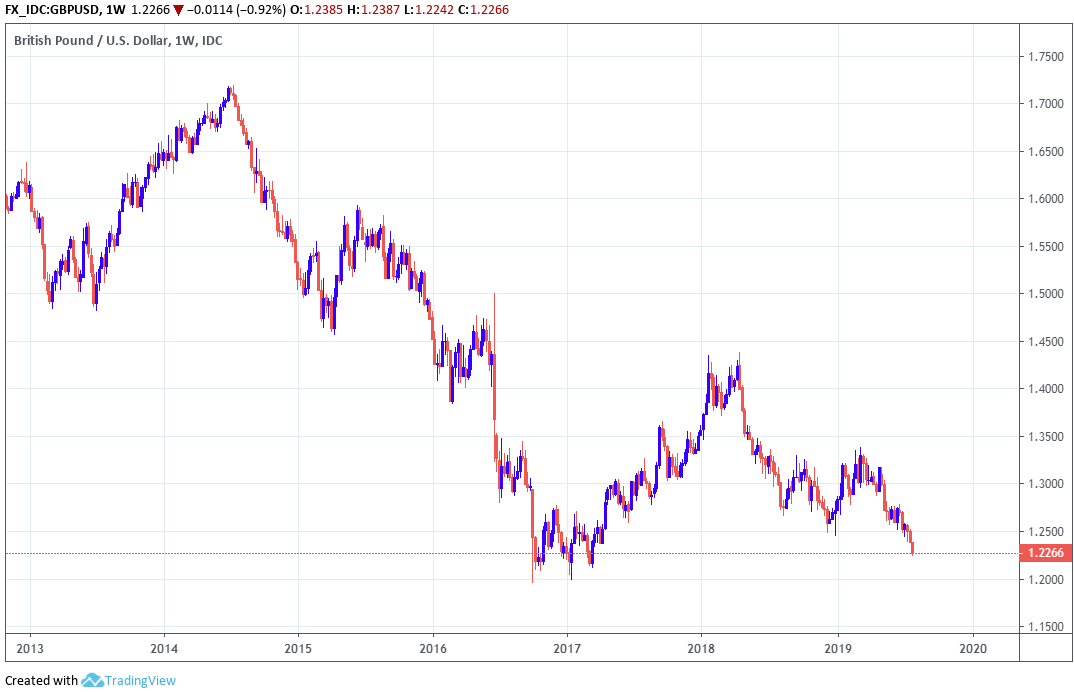 Jeremy Corbyn is a long-standing advocate of socialism. He has an openly Marxist shadow chancellor on the Labour frontbench, his commitment to free markets is nonexistent and his respect for private property rights has been questioned by some due to previous economic proposals that risked seeing utility companies nationalised at prices below their market value.

In addition, Corbyn and the Labour Party have recently swung behind the idea of a second Brexit referendum that would see voters forced to choose between whatever exit arrangements his remain-leaning party would be able to agree with the EU if in office, and remaining in the EU. That would risk setting a precedent for Scottish MPs, some of whom have never given up on the idea of independence from the UK, to demand another referendum.

"We need to see the EU provide Boris something new to work with (not forthcoming thus far, headlines just now making the mood worse and talks have barely moved). Parliament to make some noises (difficult to do on recess) or Boris tack more towards the centre ground in the debate (he looks to be doing the opposite) before this weakness finds a positive political catalyst to materially offset it," says Jordan Rochester, a strategist at Nomura.