Pound Sterling's advance against a weakening Dollar was halted on Wednesday after the Insitute for Supply Management services PMI surprised on the upside and if technical analysts are Commerzbank are right with their current call, renewed losses could be just around the corner.

Sterling has risen steadily against the Dollar in recent days, reaching a two-week high in noon trading Wednesday, but the advance came to an abrupt end when the ISM non-manufacturing PMI rose much more sharply than markets had expected for the month of May.

The PMI came in at 56.9 for last month, up from 55.5 and far ahead of the market consensus for a meagre increase to 55.6. The data is balm to the soul of a wounded Dollar given recent fears for the U.S. economic outlook amid and escalating trade war with China.

"The ISM's non-manufacturing index ticked up in May, indicating that the services side of the US economy accelerated, in contrast to its manufacturing counterpart," says Katherine Judge, an economist at CIBC Capital Markets.

Pound Sterling was egged on in its earlier advance against the Dollar Wednesday by an IHS Markit services PMI that suggested the UK's largest economic sector also saw activity pick up during the recent month, soothing concerns about the economy amid political uncertainty in London.

As recently as Friday the Pound-to-Dollar rate had traded at its lowest levels since January 2019 and is still nursing 3.5% loss for the last month alone, which came about following the announced resignation of Prime Minister Theresa May. 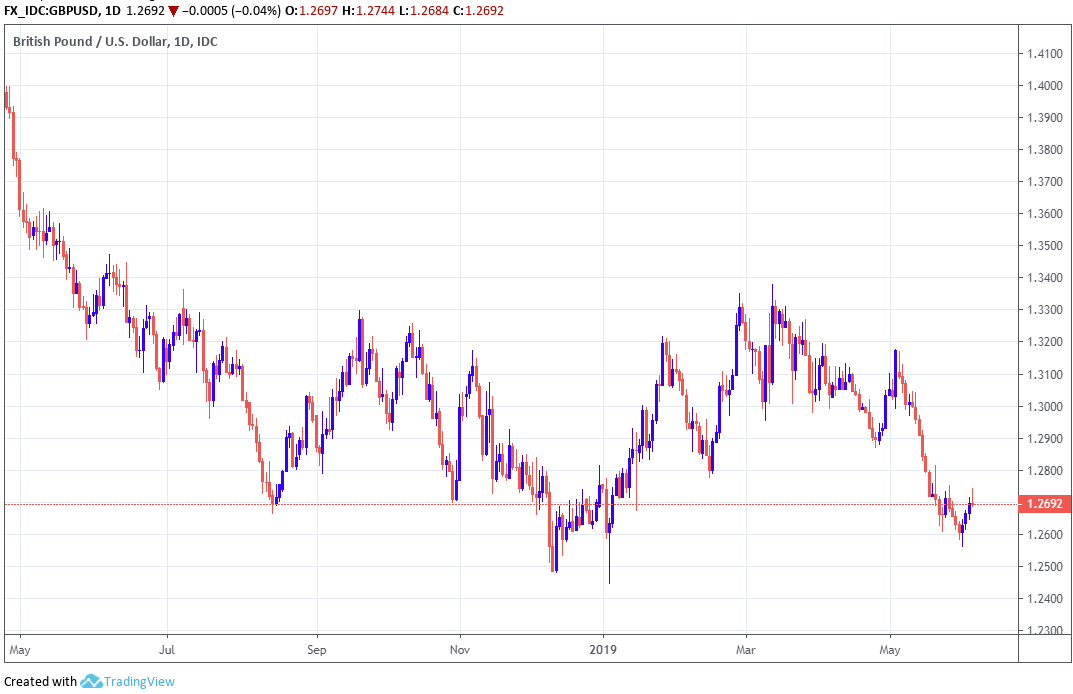 Above: Pound-to-Dollar rate at daily intervals.

A now-looming Conservative Party leadership election has effectively put the Brexit process on hold and could have myriad adverse consequences for British currency, according to some analysts.

But some figures suggested last week that the U.S. manufacturing sector is increasingly being bitten by the U.S. trade war with China, which also escalated during the month of May and as incited market speculation that the Federal Reserve could cut its interest rate before the year is out.

That led to three consecutive days of losses for the greenback and helped lift the Pound-to-Dollar rate from depths of its recent trough, but technical analysts at Germany's Commerzbank say the move higher does not necessarily mean the month-long downtrend has ended.

"GBP/USD is correcting higher very near term," says Karen Jones, head of technical analysis at Commerzbank. "It will need to regain the 20 day moving-average at 1.2747 as an absolute minimum in order to alleviate immediate downside pressure and avert further losses to the 1.2444 December 2018 low."

Pound Sterling attempted to break above the 1.2747 level multiple times during the noon session Wednesday but only managed to get as far as 1.2742 and was quoted around 1.2726 at the time when the ISM services PMI was released.

The exchange rate has since fallen to trade below the 1.2690 level and could well be headed lower. 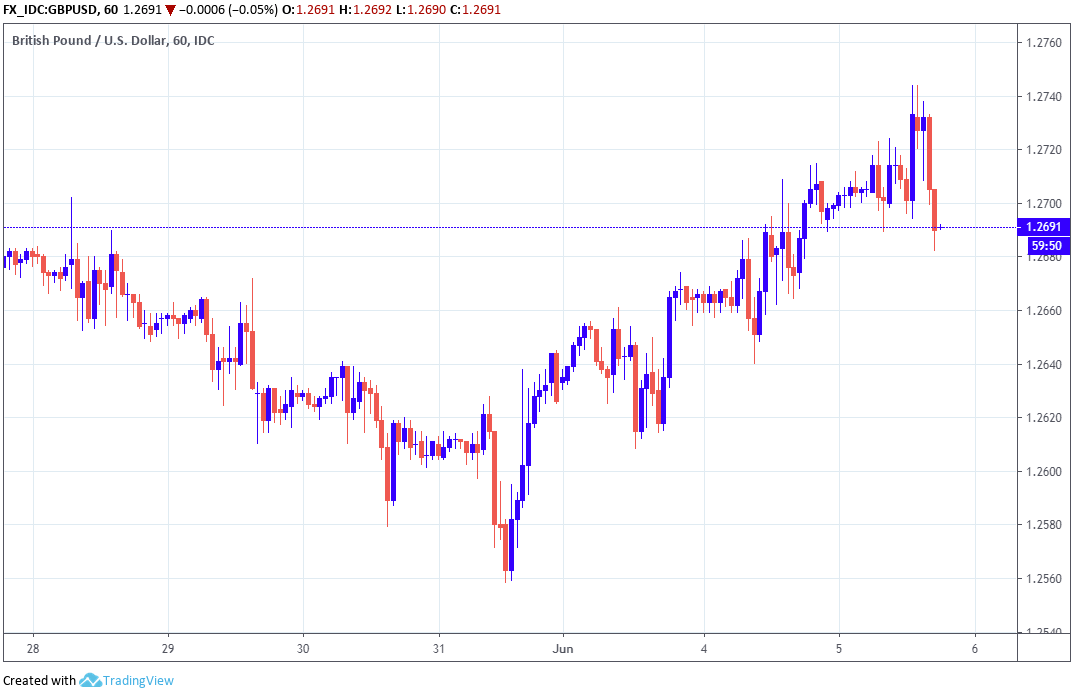 A long list of candidates are now queueing up to lead the UK Conservative Party and country following PM May's announced resignation and the candidates' views on the pros and cons of a 'no deal' Brexit are playing a significant role in the leadership election so far.

Many fundamental analysts say the risk of a 'no deal' Brexit, where the UK departs the EU and does some of its business with it on World Trade Organization (WTO) terms, will push Sterling even lower before the 2019 year is out.

If UK MPs do not approve the three-times-rejected withdrawal agreement of outgoing Prime Minister Theresa May before October 31 then a 'no deal' Brexit will automatically take place unless a Prime Minister requests an extension of the Article 50 negotiating window and the EU agrees to grant one.

Meanwhile, some fundamental analysts are saying the Dollar decline of recent days has been taken too far and that the greenback will soon rebound. Both sets of factors are negative for the Pound-to-Dollar rate.

"A surge in expectations regarding the likelihood of Fed easing has weighed on the USD, taking EUR/USD back to levels last seen in the middle of April and pushing the DXY dollar index back down to the 97.00 support area," says Jane Foley, a strategist at Rabobank. "While we have been forecasting an aggressive pace of Fed rate cuts starting in mid-2020, we see risk that the market is currently overreacting and look for the USD to recover some ground near-term."