- Pound to be driven by Brexit politics; Dollar by Fedspeak

Pound Sterling has fallen 4.0% against the U.S. Dollar over the course of May, with losses taking the exchange rate down from the May 03 high at 1.3177 down to the month low of 1.2559 recorded on the final day.

Declines are attributable to the Pound falling on heightened Brexit concerns, as the Conservative Party seeks to choose a new leader who likely to be a Brexiteer, increasing the probability of a ‘no deal’ Brexit.

The broader Dollar meanwhile put in a strong performance in a month that saw safe-haven currencies outperform as stock markets slid.

Concerning the outlook, from a technical point-of-view we see the pair is in an established downtrend and given the old adage ‘the trend is your friend’ we would normally expect declines to extend.

However, in this particular case the chart is showing some strong reversal indications which suggest the trend may be reversing and turning higher.

Thus although our overall forecast remains bearish it is heavily conditional on the market making new lows. 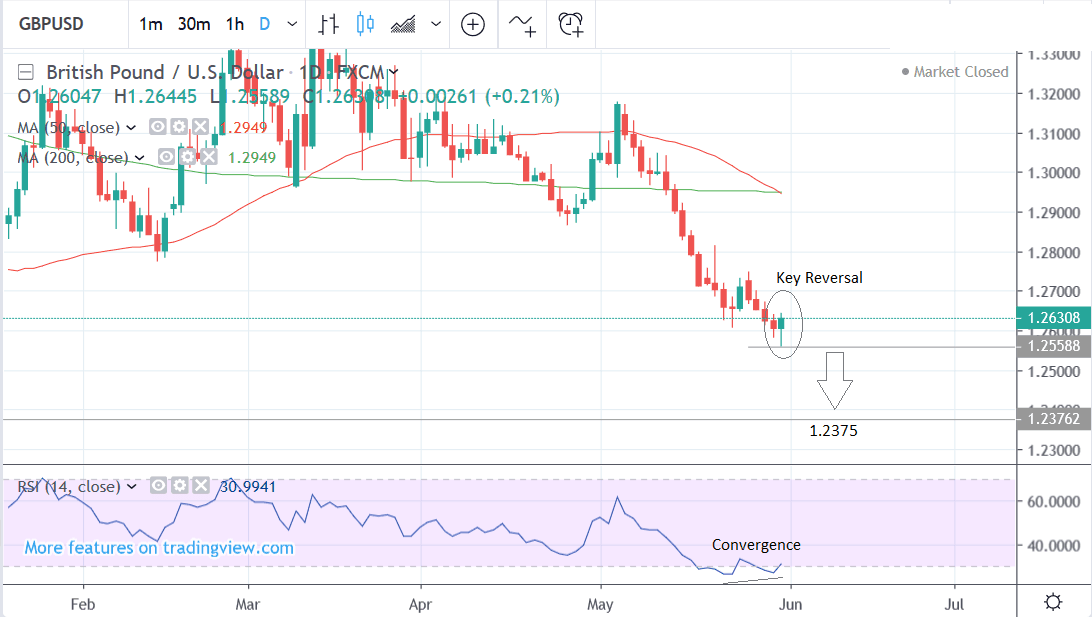 The reason we are not as bearish as previously is that the pair has formed a powerful reversal pattern called a ‘key reversal’ at the lows (circled). This pattern occurs when the market makes a new low and then recovers on the same day and closes above the highs of the previous day.

It is quite rare but when it happens, especially at the bottom of a strong downtrend, it can be the first sign a long-term recovery is about to start. In the case of GBP/USD, the key reversal has happened at a major low, even if it isn’t multi-year and it could be the first herald of a major reversal in the trend and a rebound.

Other signs support the key reversal, such as the RSI momentum indicator in the lower panel, which is showing what is called ‘convergence’ between its two most recent troughs. This happens when the market makes a new price low but the RSI fails to follow suit, it is a sign of underlying strength and probably higher prices to come.

At the same time as signalling convergence, the RSI has also risen back above the oversold line back into neutral territory. This is a clear buy signal.

Of course, it's still early days and the pair could ignore the key reversal and break lower. Over the next week, we shall see what happens. Equally, there is now a chance it could start moving higher too. 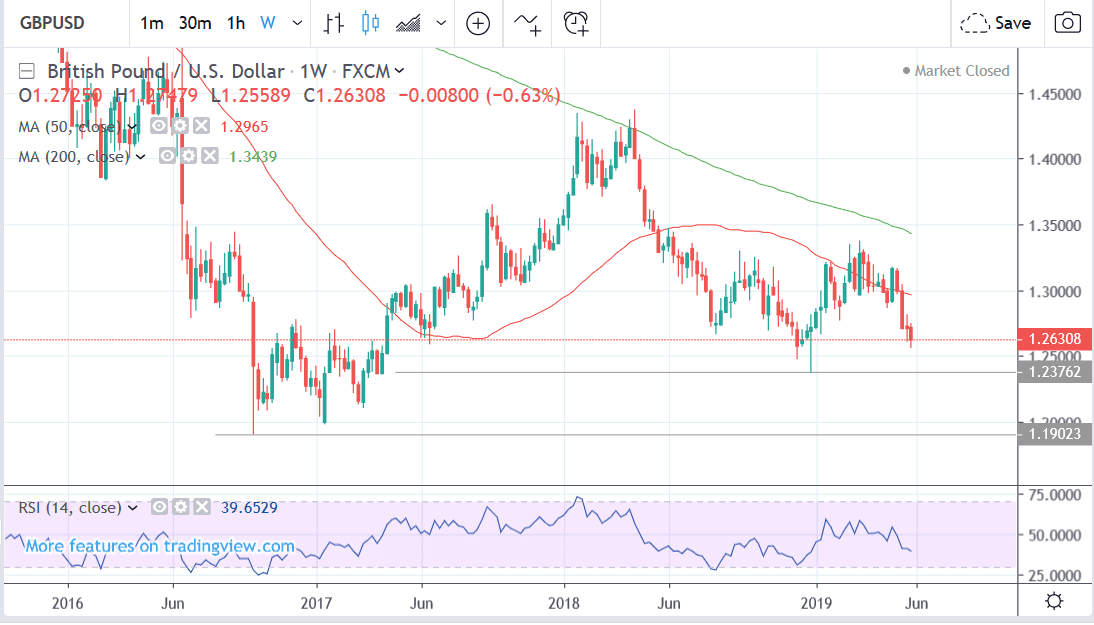 The U.S. Dollar: Data and Events to Watch

Perhaps the main event for the U.S. Dollar in the week ahead is commentary from Federal Reserve (Fed) Chairman Jerome Powell, who is scheduled to speak at an event in Chicago on June 4th and 5th (Tuesday and Wednesday respectively), and is likely to mention the outlook for Fed policy.

Currently, the Fed has been sticking to a neutral wait-and-see stance in relation to interest rates but the market is a lot more pessimistic expecting almost two 0.25% cuts.

The chart below illustrates this graphically using Fed Fund’s futures which price the probability of interest rates going up or down and therefore provide a useful forecasting tool. They show the market thinks rates should be half a percent lower (50 basis points) then the current 2.50%. 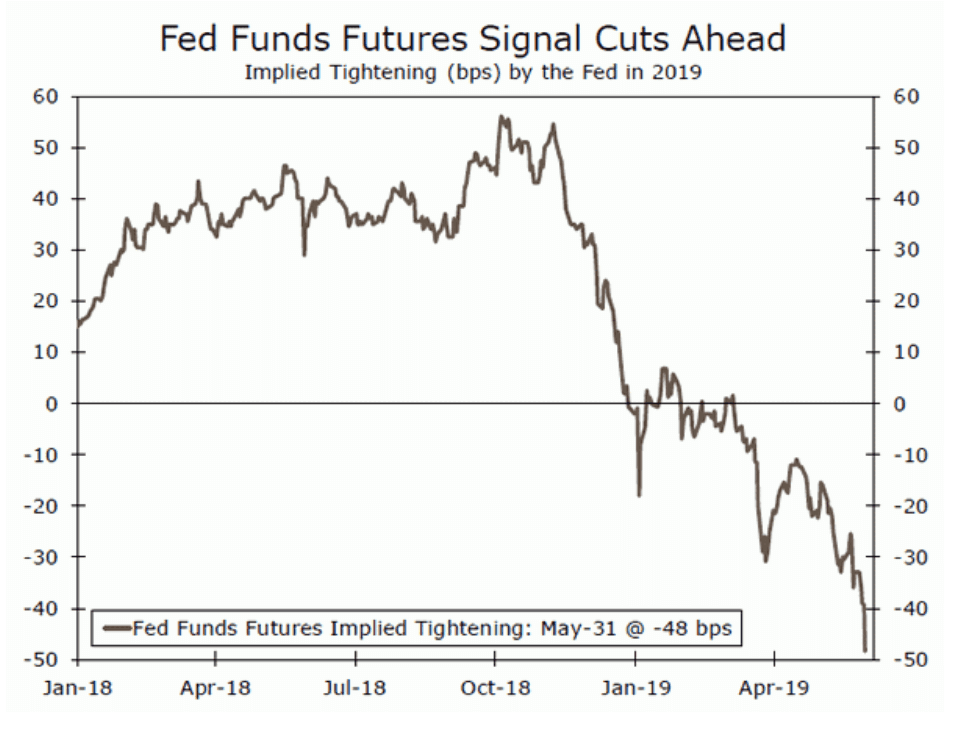 This wide a divergence between what the market expects and what the Fed expects is rare and unlikely to persist. The question is, which will adjust to close the gap? Will the Fed capitulate and become more pessimistic in line with the market or vice versa?

Analysts at Wells Fargo seems to think the market is onto something suggesting the adjustment could come from the Fed. The Fed’s favoured inflation gauge is the Core PCE and this is down at 1.6%, which is lower than the Fed’s 2.0% inflation target, and suggests the Fed may cut rates.

“With trade risks becoming increasingly important to the outlook and inflation remaining comfortably south of the Fed’s 2% target, the Fed may need less of a reason to move from its patient stance, and cut rates earlier than currently expected,” says Wells Fargo in an economic briefing note.

Another threat to the Dollar could come from trade risks as it is becoming increasingly clear that president Trump is using tariffs as a tool with which to threaten neighbours, such as Mexico, who he threatened last week because of lax border control.

On the data from the main releases are the ISM Manufacturing and Non-Manufacturing ISM surveys on Monday, June 3 at 15.00 BST and the Non-Farm Payrolls report on Friday at 13.30.

The most likely market mover of the above is the employment report, more specifically average earnings which need to stay high in order to drive inflation and stave off Fed rate cuts.

Currently, the market is expecting earnings to remain at a 3.2% growth rate, which is “not high enough to drive inflation,” according to Raffi Boyadijian, an economist at broker XM.com.

The risk is they undershoot that, which could weigh on the U.S. Dollar by dampening the inflation outlook and therefore the outlook for interest rates.

The main focus for the Pound over the coming week will continue to be political, as the ruling Conservative Party prepares to choose its next leader and the country's next Prime Minister.

Key for Sterling will be the future leader's stance on Brexit.

The current favourite, Boris Johnson is a known 'Brexiteer', and recently said that if he were PM, he would take the UK out of the EU on October 31 “with or without a deal”.

The contest is composed of several rounds. The first is held in Parliament and only involves Conservative MPs in the vote to decide a shortlist of two who are then put to a broader vote amongst party members. If Johnson can get into the final shortlist he will probably be next leader.

"The No Deal Brexit option will likely be the defining feature of the Tory leadership contest, as opposed to a leverage tool to be used primarily to extract better conditions in negotiations with the EU. This possibility becomes more urgently negative for GBP and for UK assets if one expects, as our economists do, that Boris Johnson may be inclined as a newly minted PM to call for new elections, aiming to create a parliamentary arithmetic that does not preclude a No Deal outcome," says Shahab Jalinoos, a currency strategist with Credit Suisse.

Jeremy Hunt is the favourite amongst the party membership at present, and he opposes a 'no deal' Brexit.

Regardless, whichever candidate espouses the toughest line on Brexit and potential future negotiations with Europe will likely win the final vote held by the party's membership.

This has increased downside pressure on Sterling because if the EU is unwilling to negotiate a better deal, and the next leader is a Brexiteer, it increases the chances of a 'no deal' Brexit in October.

Further complicating the outlook for Sterling is the possibility that in the event the UK were about to leave without a deal Parliament does have the power to vote down the government in a vote of no-confidence. The chancellor Philip Hammond, for one, has already said he is so against a ‘no-deal’ that he would vote against his own party if such an eventuality happened, in order to put “the national interest before party interests”.

If the government were voted down in a vote of no-confidence there would probably be a general election with an uncertain outcome. Article 50 would probably have to be revoked in the interim with considerable consequences for the chances of a Brexit ever being revived.

The outlook is decidedly murky, and therefore it is difficult to see Sterling enjoying any upside potential until this raft of issues are decided and certainty is returned to the political outlook.

On the economic data front, the main release on the horizon for Sterling are the IHS Markit PMI surveys.

The Manufacturing PMI survey is forecast to show a fall to 52.1 from 53.0 in May. This is still above the threshold for expansion of 50 but shows slowing activity. The results are released on Monday, June 3 at 08.55 BST.

PMI’s are widely acknowledged to be reliable forward indicators of growth and so a lower-than-expected reading would probably result in a decline in the Pound and vice versa for a higher-than-expected result or rise.

Construction PMI is out on Tuesday, and forecast to remain unchanged at 50.5.

This is the release most likely to have an impact on Sterling as the services sector accounts for over 80% of UK economic activity and therefore offers a better gauge on where the overall economy is headed.

Besides PMIs, there is potential for volatility from the testimony of Mark Carney and other Bank of England officials as they are questioned by the Treasury select committee on Monday, however, he and his colleagues are likely to defer an opinion on interest rates until there is greater clarity on Brexit.