Inflation data has come in line with economist forecasts at -0.1% confirming the UK to be in its second consecutive month of deflation.

Ahead, Retail Sales are forecast to remain within growth territory, while public finance figures should confirm a narrowing of the UK deficit.

The data comes as the pound remains caught in an uptrend agianst the euro, we feel though that much of the moves here come courtesy of expectations for a Decembe interest rate cut at the ECB.

The pound has edged lower against its group-of-ten rivals on Tuesday after the UK was confirmed to be in deflationary territory.

The inflation rate confirmed the second consecutive reading of -0.1% year-over-year. The Bank of England (BoE) will unlikely raise interest rates until we start seeing inflationary pressures grow once more.

For those hoping for a stronger British pound a rising interest rate profile is needed to sustain gains and we remain sanguine on sterling's chances in the current inflationary environment. 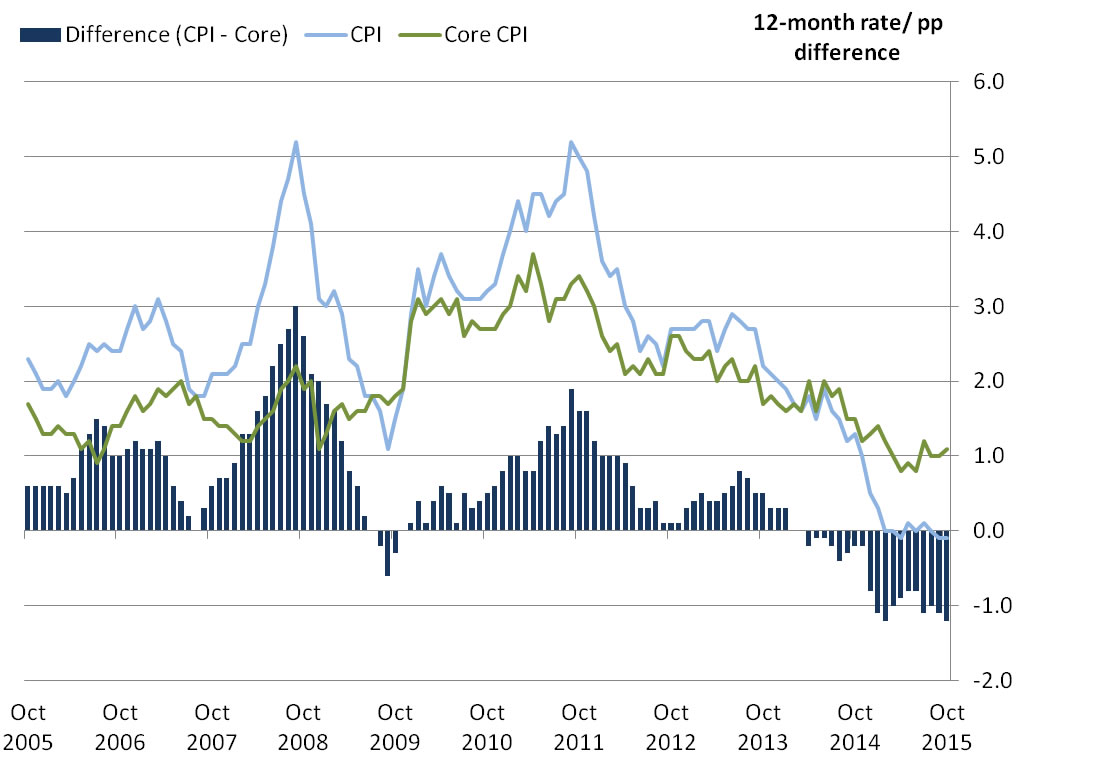 However, Bank of America's Robert Wood believes that we are witnessing the bottom deflation and the rate will start rising steadily over coming months.

"Petrol is the main reason why we are confident that inflation has troughed. As long as oil prices follow the current futures curve, petrol price inflation should rise from -14% in October to around 0% in February, adding about half a percentage point to CPI inflation," says Wood.

The UK October Retails Sales will be released November 19.

UK September Retail Sales showed a noteworthy uptick, largely in part the rugby World Cup and the inclusion of The August Bank Holiday. For October, the lifting effect of the holiday will be diminished, but over half of the rugby games were played in October.

TD Securities forecast, “We see upside risks to the market consensus of -0.4% m/m, with TD expecting a reading of 0.7% m/m, but note that uncertainty remains elevated around this release owing to the special factors.”

The UK Public Finances will be released on November 20.

The UK Public Finances will be the last public accounts publication before the Autumn Statement. Generally, markets expect figures to be a bit higher than anticipated but in line with declined government borrowing in the Fiscal Year 2015 t0 2016.

TD Securities concur, “... expect the government’s (ex-banking) borrowing to have shrunk from £9.4bn in September to £6bn in October. This would mark an improvement of about £1bn relative to the October 2014 figure, largely on account of healthy tax receipts over the last year.”w