"For the first time in a long while we turned positive on the pound," says Shreyas Gopal, FX strategist at Deutsche Bank, one of the largest primary dealers of foreign exchange in the world.

Gopal says the odds of a UK recession have receded of late and the UK policy mix "finally looks more favourable with high real rates and a much improved external balance picture compared to September."

Deutsche Bank is the latest among some of the world's largest financial institutions to adopt a more constructive view on the Pound's outlook in 2023; we reported HSBC had shifted its stance late last year.

Deutsche Bank's research suggests the UK might have fallen victim to what the CEO of the U.S. Chamber of Commerce identifies as "second-hand pessimism", a condition that describes how expectations for the broader economic outlook can diverge from one's own expectations and experiences.

An example is how UK business leaders overwhelmingly hold a negative view of the economy's prospects but are simultaneously optimistic about their own growth prospects in 2023, according to a recent survey.

Gopal notes such a "second-hand pessimism" in the UK labour market where he finds a discrepancy between how consumers hold a downbeat view about the wider economy and a positive view of their own employment prospects.

"Confidence on how consumers expect the wider UK economy to fare over the next 12m is still close to record lows, even if there are nascent signs that we may be past peak pessimism. By contrast though, employment expectations remain at far better levels compared to around the GFC, and around the first Covid lockdown," says Gopal. 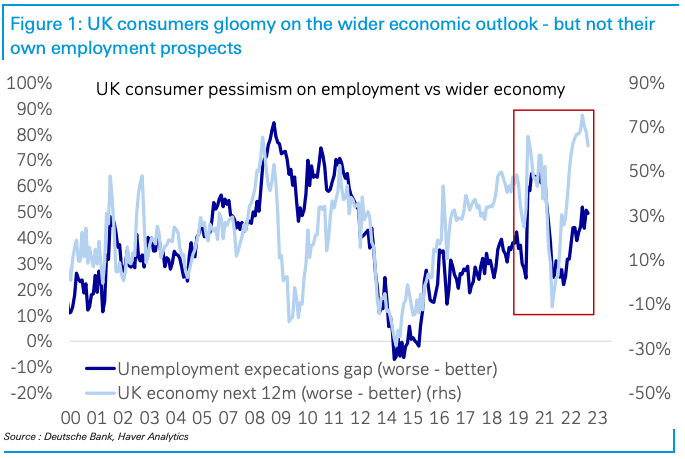 These findings suggest to Deutsche Bank the UK's economic outlook is perhaps not as bad as the consensus narrative continues to suggest.

"This in turn could mean that spending remains more resilient than expected, further delaying the onset of a UK recession," says Gopal.

This is a key source of investor flow support to the Pound.

It is also noted that the Pound's "eternal vulnerabilities look much better than heading into the mini-budget."