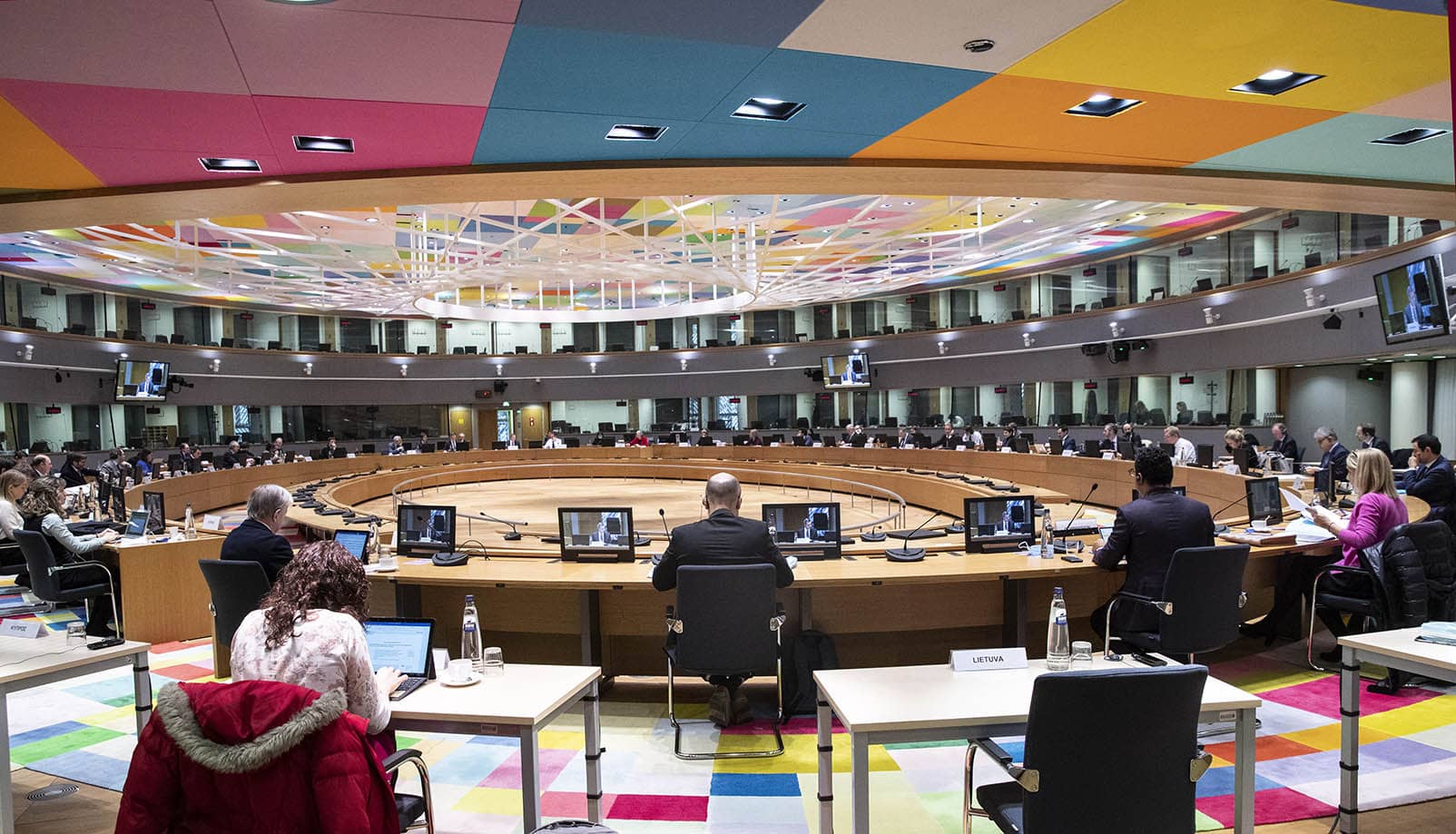 Above: EU Ambassadors approve the EU-UK free trade deal in Brussels on Dec. 29.

The selling pressure has eased at the time of publication on Tuesday, a day that sees UK markets open following the Christmas Holiday period. The return of traders in London could inspire some short-term volatility but full participation is only likely in January with many taking this holiday shortened week off.

"FX markets have begun their first proper trading day secure in the knowledge that the United Kingdom will have a trade deal above WTO standards with respect to the EU-27 come 1st January. So far there hasn’t been a huge sigh of relief evident within the Pound but it is evident that, in combination with Trump signing a fiscal stimulus bill to prevent US government lockdown, markets are embracing less defensive conditions," says Charles Porter at SGM Foreign Exchange Ltd.

A post-Brexit surge that many analysts and readers had anticipated has not materialised and the overall sense is that the UK currency will likely remain under pressure near-term. 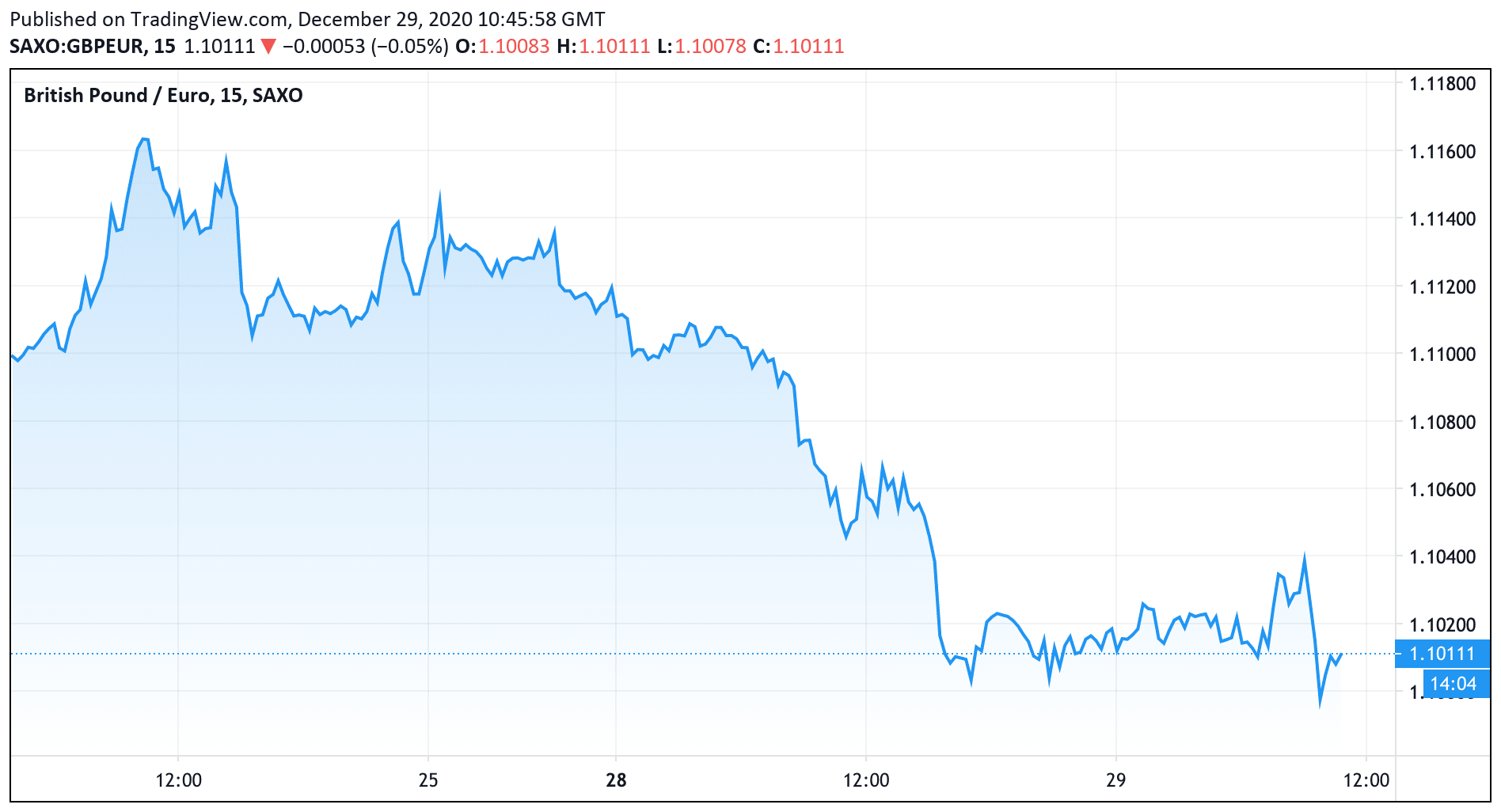 Above: GBP./EUR's decline since news of a Brexit deal had been reached on Dec. 24.

The market appears to have overwhelmingly 'priced in' a deal being reached, explaining why the Pound has fallen in the wake of news that is on the surface good for the economy and its currency as it erases significant uncertainty about the future.

"We’ve consistently thought a deal would take place and since late July we've held a 1.36 end-December forecast," says Gavin Friend, Senior Market Strategist at NAB in London. "Consistent with our lower USD view, have forecast GBP/USD moving above 1.40 into 2021 and in our latest FX update we have 1.42 for GBP/USD end Q1, 2021."

NAB are forecasting the Pound-Euro exchange rate to trade around 1.1495 in 2021.

"Another reason why we see GBP not rallying strongly against the EUR is the UK will see some negative economic impact from its decision to exit the EU area. The UK’s independent Office for Budget Responsibility has forecast the UK will see a 4% loss in economic growth over fifteen years, than otherwise would have been the case if the UK had stayed in the EU. The true extent of any output loss will become clearer in time and after the initial euphoria of a deal has faded. The UK is, after all, a service-based economy and this deal is predominately - though not exclusively - one for goods," says Friend.

Considering the recent price action in Sterling and expectations by NAB - and numerous other analysts - for the currency to rise in 2021, it appears any rise higher could be slow.

"With the deal now agreed, we continue to hold the view GBP/USD can push on to 1.3750 in the coming days, but wait until 2021 for moves above 1.40. One factor limiting GBP gains is the rapid spread and likely economic impact of COVID in the UK, including the new reported strain," says Friend.

EU Ambassadors on Monday temporarily approved the free trade deal as the EU Parliament is unable to convene to put the deal into effect prior to December 31.

The UK Parliament is meanwhile expected to ratify the deal this week as there has been very limited criticism of the deal from Prime Minister Boris Johnson's Conservative Party and the opposition Labour Party have said they will back the deal.

While the deal agreed by the EU and UK will ensure "zero tariffs and quotas on all goods that comply with the appropriate rules of origin" but the trade in services - which accounts for over 70% of UK economic output - is not fully covered by the deal.

"The deal itself is a hard form of Brexit and provides for tariff free (and limits thin non-tariff barriers to) trade only. The deal does not cover services, including financial services. The deal also makes no attempt to preserve elements of the customs Union and single market that are supportive of economic growth," says Porter.

Analysis from Goldman Sachs says there are some provisions that will aid services, e.g. facilitation of short-term business trips and temporary secondments of highly-skilled employees, but the deal does not include the (automatic) mutual recognition of professional qualifications or passporting rights for financial services.

Nevertheless, the investment bank are constructive on the UK economy in 2021 citing three features in addition to the Brexit deal:

Goldman Sachs hold an above consensus forecast for GDP growth of 7.0%, where consensus is looking for 5.4%.

They see the GBP/EUR exchange rate recovering to 1.16 over coming months.