- GBP on back foot as Brexit and coronavirus concerns hit risk appetite.

- Renewed threat of ‘no deal’ Brexit a medium-term weight on the GBP.

- GBP/USD in danger of daily close below 1.2841 uptrend support line.

The Pound is besieged by multiple risks and was in retreat from the Euro and Dollar Friday as analysts warned more losses could be likely in the short-term.

Prime Minister Boris Johnson has revived the threat of a ‘no deal’ Brexit and risks seeing the Pound weighed down by a fresh ‘risk premium’ in the months ahead, while Sterling is also threatened by the spread of coronavirus outside China, which has destabilised markets this week.

Sterling has retreated sharply from the Euro and Dollar ever since Wednesday amid severe losses for stock markets across the globe including those in London, which have reflected mounting investor fears over the impact coronavirus could have on the global economy.

And these losses have taken the Pound-to-Euro and Pound-to-Dollar rates back down toward key support levels that need to remain intact on the charts if the British currency’s multi-month uptrend against its two rivals is to endure.

“EUR/GBP has rallied sharply through the downtrend at .8432 and increasingly looks to be a major base in development. A close above .8610 will confirm a move 200 day ma at .8746 and beyond,” says Karen Jones, head of technical analysis for currencies, commodities and bonds at Commerzbank. 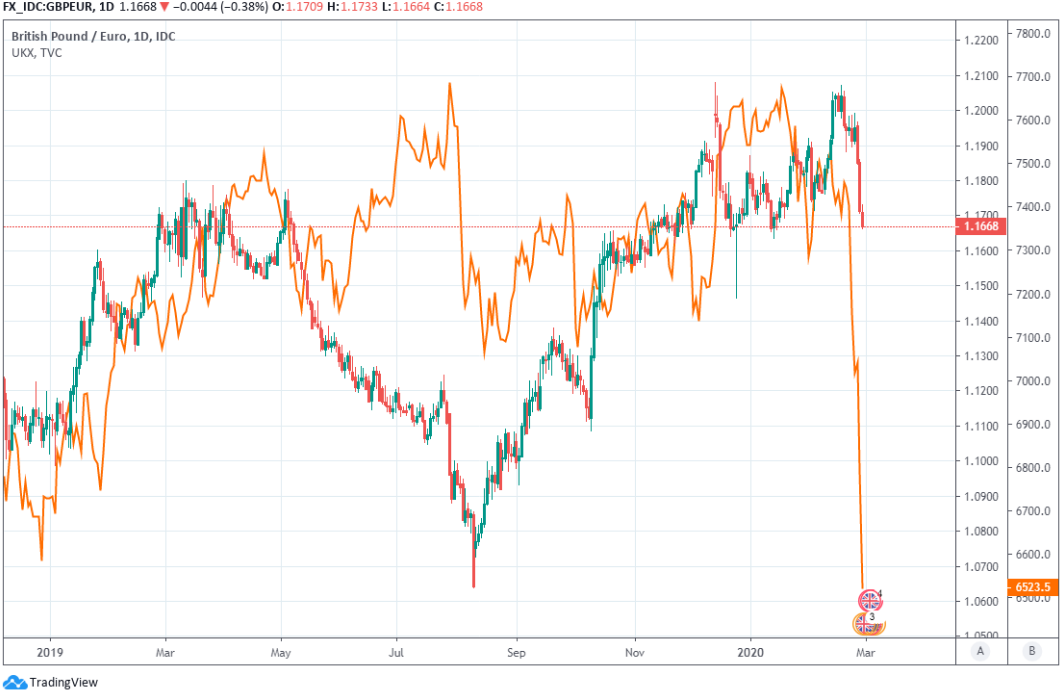 Jones says the Pound-to-Euro rate appears to have topped out after months in an uptrend and has warned that a daily close beneath the nearby 1.1614 level would condemn the exchange rate to a more protracted decline back to 1.1433.

And she’s also warned the Pound needs to hold the nearby 1.2841 technical support line against the Dollar or it would then be in danger of falling back to 1.2697, a level not seen since before Prime Minister Boris Johnson announced his withdrawal agreement in the early days of October last year.

The technical picture is souring for Sterling at the same time as the fundamental environment becomes more hostile.

Sterling has been soft all week but losses have accelerated since Wednesday as markets contemplated the likely Downing Street response to the EU decision to pursue controversial objectives in the trade talks, although weakness also coincides with an outbreak of pandemonium in stock markets. 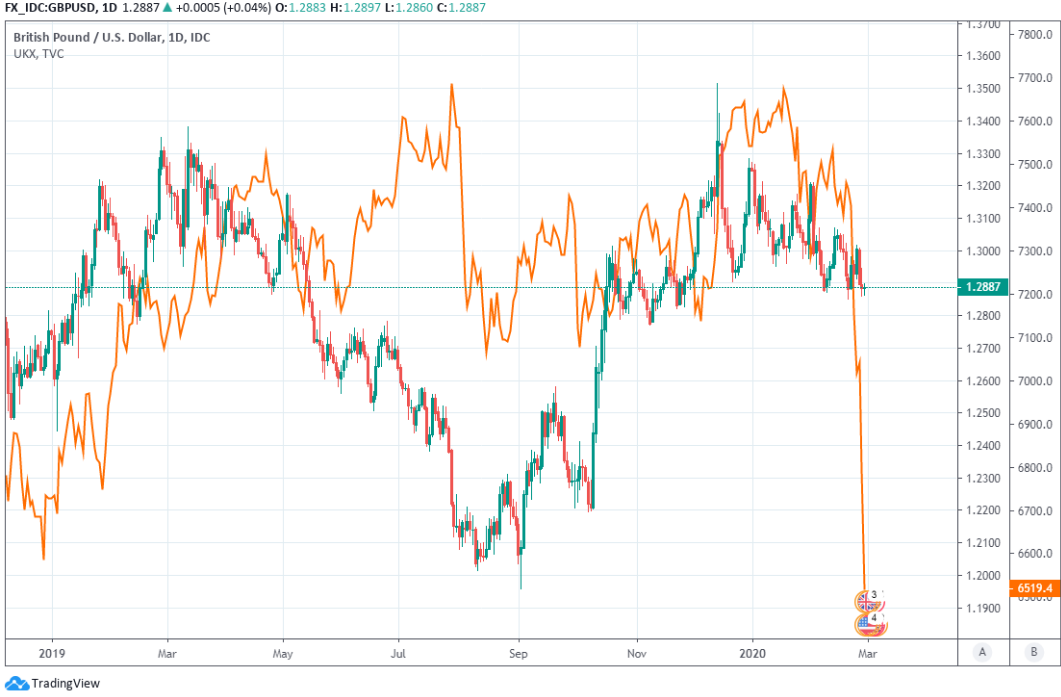 “Sterling currently is hovering at $1.29 and €1.17 and has traded within a narrow range in recent weeks. We fear, however, that sterling will be one of the currencies hit hardest if the coronavirus becomes a fully-fledged pandemic and pushes the global economy into recession,” says Samuel Tombs, chief UK economist at Pantheon Macroeconomics. "The pound is a structurally weak currency and it remains sensitive to global investors' appetite for risk. Large capital inflows are required to keep sterling stable...Sterling depreciated by 25% during the 2007/08 crisis primarily due to a global pullback in cross-border finance, not a material shift in interest rate differentials."

Sterling might remain weak so long as investors are in panic mode over the coronavirus, even if concerns about the Brexit talks ease. Brexit is also now back to being a headwind for Sterling, at least for the time being.

"We should be braced for a very different negotiation process led behind the scenes by Dominic Cummings than anything we saw during Theresa May’s time as PM. A much more aggressive approach will be seen quite quickly following the start of negotiations that will heighten fears of a no-deal Brexit at the end of the year," says Derek Halpenny, head of research, global markets EMEA and international securities at MUFG. "We have said since the start that a ‘barebones’ deal is the only likely outcome given the limited scope for the EU to offer anything more without commitments on issues like employment rights, state-aid and environmental regulations." 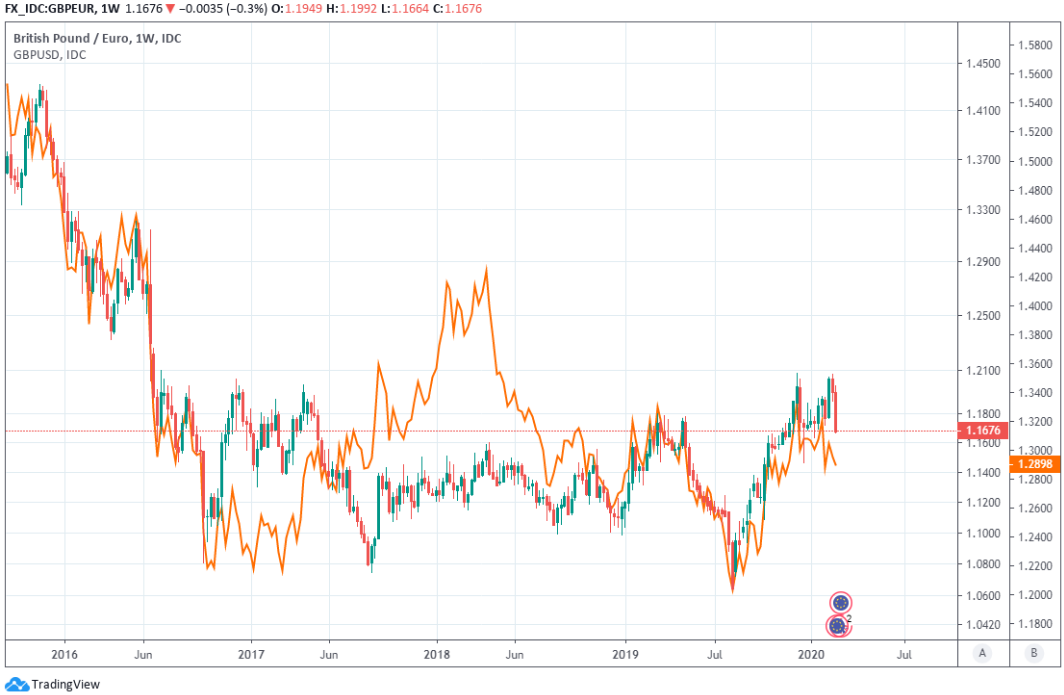 The government said Thursday that if it's not possible to negotiate a satisfactory agreement then "the trading relationship with the EU will rest on the 2019 Withdrawal Agreement and will look similar to Australia's," which is a newly minted code for a 'no deal' Brexit.

And it put political and economic independence at the heart of its negotiating strategy in a mandate outlined this week while prominently demanding the same kind of “autonomy” in decision making that’s always only ever been reserved for the EU in previous Brexit related agreements and declarations.

Concerns over a ‘no deal’ exit weighed heavily on the Pound for years heading into 2020 and were only alleviated by the withdrawal agreement that many saw as making a 'no deal' exit highly unlikely.

“We think this is likely to refocus investor attention on downside risks for the GBP,” says Ned Rumpeltin, European head of FX strategy at TD Securities. “EURGBP has pushed higher to test resistance just above 0.8505. We see additional upside risks for the pair and look for a move toward 0.86.”