- Gov says conspiracies are "rubbish" but did pundits miss something?

- Funds said to bet against UK stocks, GBP with inside scoop on Brexit.

- Brexiteering funds said to want 'no deal' Brexit to profit from wagers.

- But two hedge fund investors may actually be betting on 'soft Brexit'.

- Tate & Lyle, Johnson Matthey lose £2 mn for every one cent rise in GBP.

Brexit-backing hedge funds betting against companies on the London stock market could in some cases actually be wagering that the UK ultimately sees only a 'soft' exit from the EU, rather than the 'no deal' some claim those funds want, because of the impact of currency fluctuations.

Newswires and airwaves have been awash for weeks with suggestions that some prominent Brexit-supporting hedge funds are not only wagering against UK companies but also that said financiers control Prime Minister Boris Johnson, who's supposedly pushing for a 'no deal' Brexit so his City donors can profit from speculative trades. Johnson says the allegations are "rubbish".

The Telegraph, FT, BBC and others have all set out a litany of flaws in the claims although the story was given a fresh lease of life last week when Rachel Johnson, the PM's sister and a prominent advocate of EU membership, repeated them in an interview with Sky News. Former Chancellor Philip Hammond mischieviously did the same in the Sunday Times this week, leading opposition MPs to call for a committee investigation.

However, in spite of all the scrutiny given and conclusions drawn in relation to what is now widely dubbed a "conspiracy theory", commentary on the matter has overlooked something. In short, a few of the biggest bets made against UK companies by some promiment Brexit-backing investors are more likely to be bets that the UK at least avoids a 'no deal', rather than wagers the UK ends up being clobbered by one - assuming the trades are at all motivated by Brexit.

This is because of the impact that movements in exchange rates can have on profits of companies that import and export goods or services. 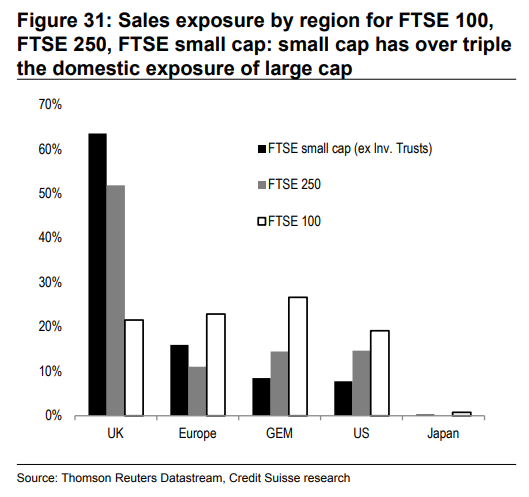 Hedge funds are notoriously secretive so they rarely say what it is that they're doing and why, which makes interpreting the little information that is available about their activities difficult, especially as Brexit cuts both ways for the London stock market. FTSE 100 companies earn three quarters of their revenue outside of the UK and in foreign currencies, while the FTSE 250 is more domestic.

Currency fluctuations explain why the FTSE 100 was among the best performers of all global stock markets in 2016 and the latter wasn't. The FTSE 100 entered 2016 around 6,242 and had risen only as far as 6,344 by the time of the referendum, giving it a 1.6% gain for the year at that point, but it ended the year at 7,112. That made for an annual gain of some 13.9%, which is a significant increase for any stock index at any point, with most of the advance coming only after the vote to leave the EU.

The FTSE outperformed because foreign currency revenues appreciate in value whenever the British currency falls, and fall it did after the referendum. But there's a flip side to that too. Those same revenues would depreciate in value if UK exchange rates rise, especially if the Pound gets back toward where it was on the night of the referendum, and most analysts say it would rally sharply if the UK gets a Brexit deal or gives up on the endeavour altogether.

That would mean trouble for the FTSE 100 and companies that earn in foreign currencies at the same time as having shares denominated in Pounds, so why would two of the most prominent Brexit-backing hedge funds who're allegedly hankering after a Pound-punishing 'no deal' Brexit then go on to wager against companies with lots of foreign currency revenue? And why would they then make exactly these kind of trades some of their largest?

Or could it be either that they're betting on a 'soft Brexit', or that they are not motivated by reasons related to Brexit at all? 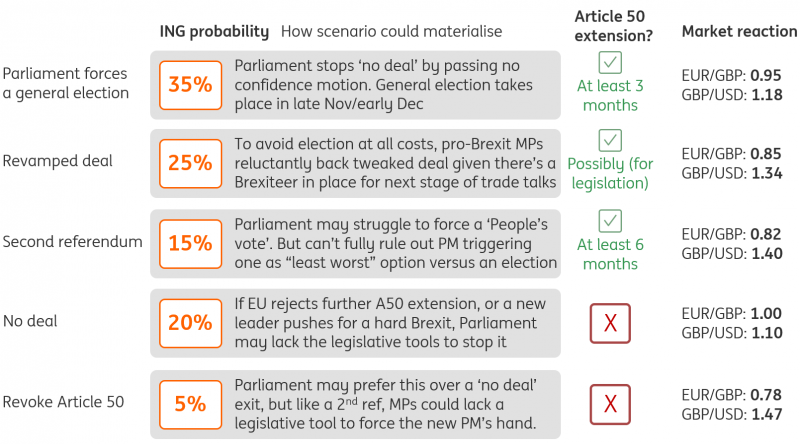 Above: ING Group forecasts for GBP/USD and GBP/EUR under different Brexit scenarios.

Marshall Wace, an asset manager with one founder who backed Brexit and another who is said to have backed remain, has been cited by Byline Times as being among those allegedly seeking a 'no deal' Brexit while betting against UK companies. he firm does have a number of bets against British stocks, third party records show, including against many that would probably suffer if a 'no deal' Brexit turned out as bad as many say it would.

However, the firm's largest 'short' trades appear to be against Tate & Lyle and Johnson Matthey. It had a short position, which is to say it has borrowed and then sold, shares representing 1.7% of the voting rights in Tate and 0.80% in Johnson Matthey this Thursday. Tate had a market capitalisation of £3.27 bn at the time, making the stake worth something like £62 mn, while the Johnson Mathey position looked to be worth something like £43 mn on Thursday.

1.7% of Tate & Lyle is the largest slice of any one company that Marshall Wace is betting against and the £62 mn value of the wager, from a cursory glance, appears to be second only to a similar bet against investment supermarket Hargreaves Lansdown. Both Tate and Johnson benefited from currency devaluation following the vote to leave, which knocked the Pound down 17% against the Dollar and 13% against the Euro. That lifted the Sterling value of foreign revenues, as well as the companies' share prices.

If there is a 'no deal' Brexit in October then those shares could well rise and although they might yet fall for many other reasons, they'd also be very unlikely to take a 'soft' Brexit or a Brexit cancellation well at all. Similar is true of Odey Asset Management, which has large bets against the likes of the foreign-currency-invested emerging market financial firm Ashmore Group, as well as the UK housebuilder Berkeley Group and other domestic facing companies.

Tate & Lyle: If there’s any Brexit motivation behind it...it could be a wager that Brexit won’t happen!

Given that Tate & Lyle has made no secret of its distaste for a costly EU regulatory burden, there would presumably be adverse consequences beyond foreign exchange if the UK was to not completely check out of the EU. But, even so, the company is a significant Dollar earner too.

Tate made less than a third of sales in Europe in 2019 but reported financial numbers to investors in Sterling. It says every one cent rise in the Pound-Dollar rate will cost around £2.2 mn in adjusted pre-tax profit. That’s equal to 0.7% of the £309 million pre-tax bottom line earned in 2019.

The Pound could rise more than six cents back to 1.30 if the UK gets an EU withdrawal deal this month, ING forecasts suggest, while a second referendum is seen driving it back to 1.40. The latter is a level not seen since June 2016.

A cancellation of Brexit could lift the exchange rate to 1.47, although a move up to 1.40 alone could potentially see as much as 14% of company's profit wiped out, disclosures in the annual report show.

Tate achieved an average Pound-to-Dollar rate of 1.31 last year and a Pound-to-Euro rate of 1.13, although the former has fallen 8 cents since then and the latter has remained stable. But if the market gets back above those levels, currency fluctuations could act as a headwind on the financial statements.

And even before then, the shares could suffer if the Pound rises in the months ahead because, with the UK currency down significantly since March, a foreign currency ‘dividend’ may already have been priced into the stock. 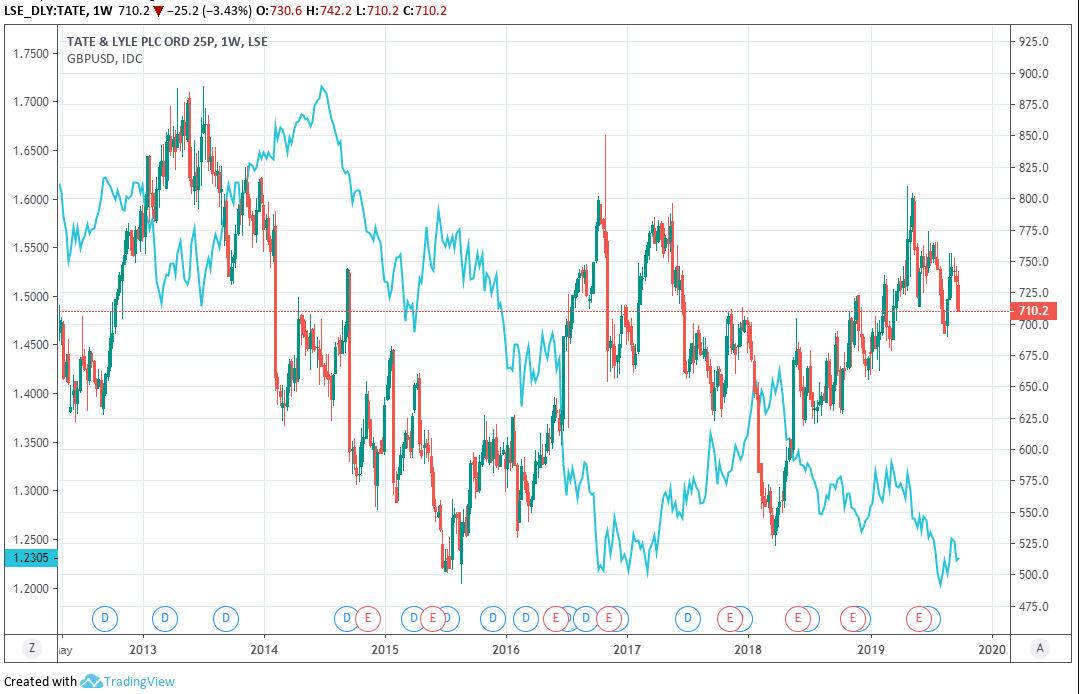 Johnson Matthey: Another globetrotter with lots of foreign currency income...and little direct exposure to a ‘no deal’ Brexiting Britain

Johnson Matthey, a specialty chemicals company with customers cast as widely across the spectrum of industries as they are across the globe, earns just 12% of its revenue on the European continent.

The company says Brexit poses a risk to its business because it could lead to divergence between rules in the UK and rules in the EU, which currently govern the manufacture and sale of chemicals. But it earns a significant portion of revenue in other currencies, notably the Dollar, which means any increase in Pound Sterling would eat into shareholder returns and the share price.

Johnson Matthey says every cent change against the Euro and Dollar will also cost it £2 mn this year, which is equal to around 0.5% of the £566 mn 'underlying operating profit' earned for the year ending in March 2019.

A 10 cent rise in the exchange rates, over and above those achieved last year, would risk slashing profits by a total of 5%. 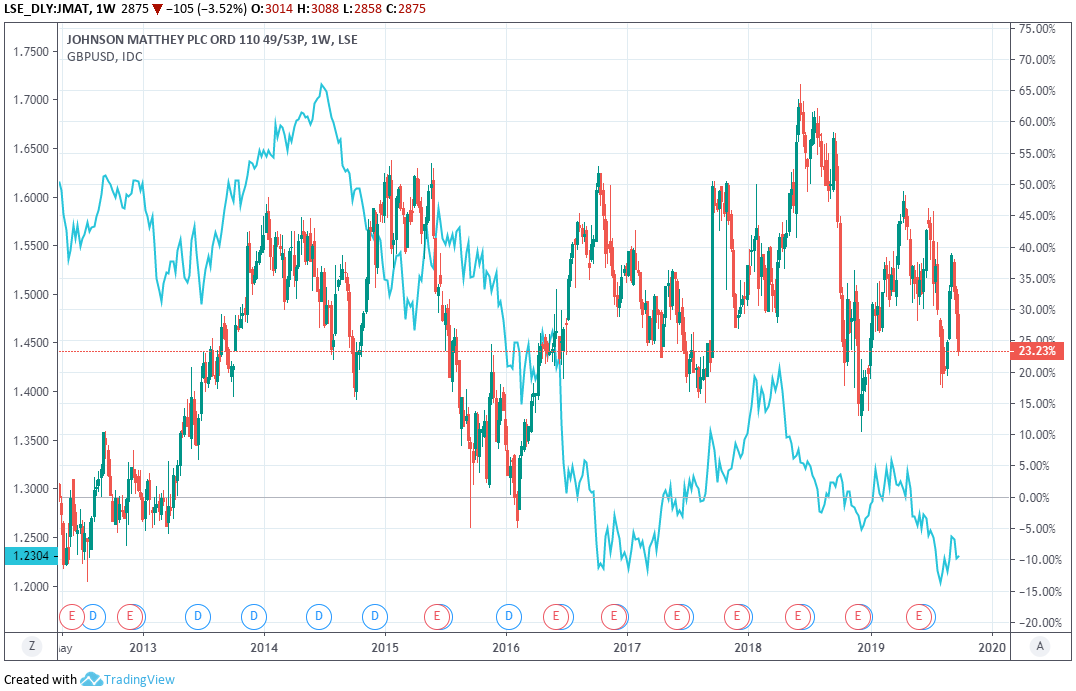