The British Pound has come under more concerted selling pressure over the past 24 hours with a fall below $1.25 against the U.S. Dollar looking to be a catalyst to the broader sell off in the wider Sterling exchange rate complex.

The $1.25 level is a significant support level for GBP/USD and its breaking therefore poses further potential downside. This would likely spell weakness in a number of other GBP-based currencies we believe.

"Sterling continued fighting an uphill battle as persistent political uncertainty, signs of a sharp cooling of the UK economy and technical factors all conspired against the UK currency," says Mathias Van der Jeugt, an analyst with KBC Markets in Brussels.

Sentiment towards the UK currency remains poor amidst a significant time of change in UK politics with a new Prime Minister due to be installed by the end of July and little sign of a way out of the current Brexit impasse.

"Brexiteer Boris Johnson has the best cards to succeed Theresa May as Prime Minster. With parliament opposing a hard Brexit, clashes in parliament will increase political uncertainty and weigh down GBP sentiment in the short-term," says David A. Meier, an analyst with Julius Baer in Zurich.

Meanwhile, the UK economy appears to have slowed down sharply through the mid-year period, leading to growing expectations for a potential interest rate cut at the Bank of England in coming months.

The Pound-to-Euro exchange rate will meanwhile be eyeing a defence of support at 1.1124 today: we believe this to the key 'line in the sand' for those looking at GBP/EUR.

If the exchange rate closes below here today then we would be more confident in saying that the broader downtrend in the Pound-to-Euro exchange rate, in place, since early June is merely extending.

A close below 1.1122 overnight suggests to us that a key support level has been broken, which advocates further losses in the exchange rate.

1.1122 was the previous July low and the Pound has failed to go below this level over recent weeks leading me to see it as a potential guard against further weakness: if the level had held then a broader sideways trend in the exchange rate could be evolving.

This is however not the case, and an ongoing sell-off appears to be well entrenched.

Our latest GBP/EUR week-ahead forecast report warned the overall tenor in Sterling-Euro is one of weakness and as such further losses might be expected this week.

"Given the overarching downtrend on the daily and weekly charts, however, there is a risk of a breakout from the range lower to a downside target at 1.1050. A break below 1.1115 would provide confirmation for a continuation lower," said Joaquin Monfort, Pound Sterling Live's Technicals Editor. 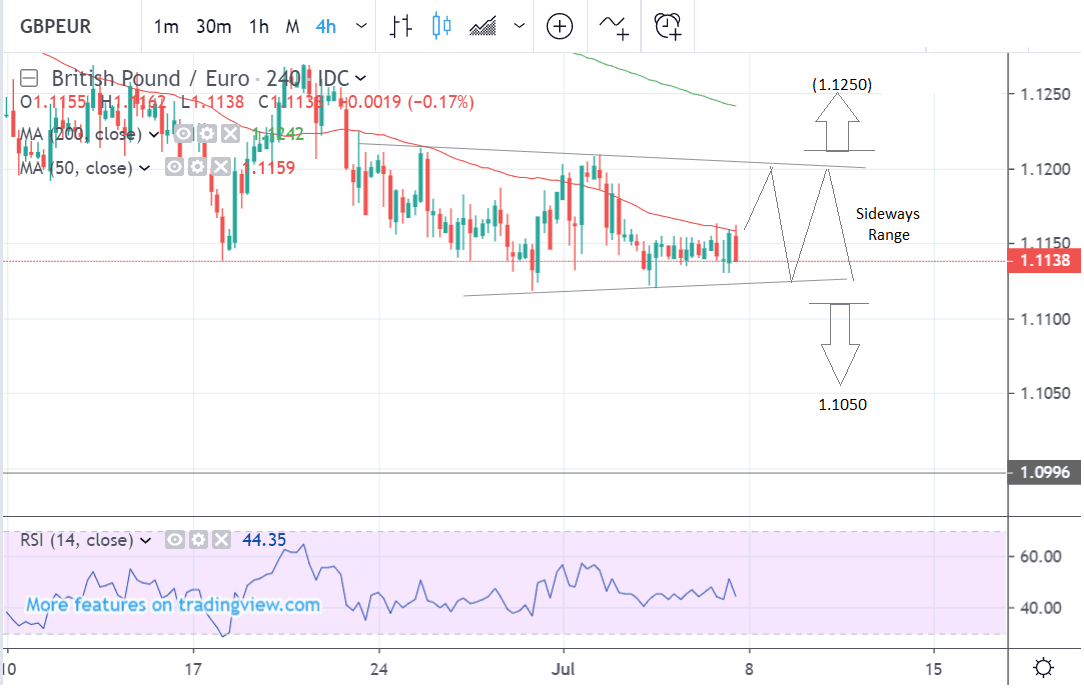 The Pound-to-Dollar exchange rate has broken below 1.25, and for analysts this could trigger further declines.

The exchange rate is quoted at 1.2484 at the time of writing, the lowest level recorded since a brief flash-crash hit the wider currency market in early January.

"Prices remain under pressure, helped by the backdrop of broader USD strength. As such, we are re-testing the medium-term range lows. A recovery back through 1.2560-1.2610 resistance is needed to alleviate the immediate pressure and suggests further range trading," says Robin Wilkin, a cross-asset strategist with Lloyds Bank. 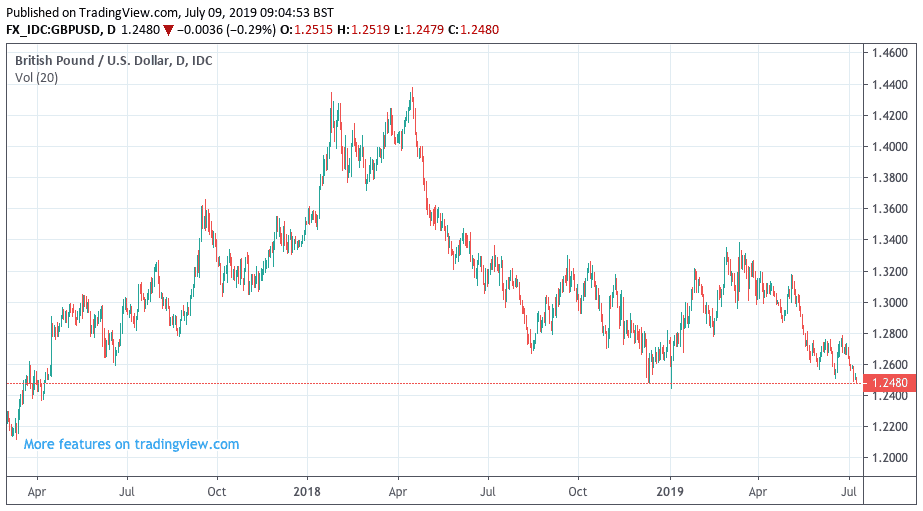 The Dollar is one of the better-performing major currencies on the day and could arguably be cited as being the driver of the current move, however persistent weakness in Sterling remains an enduring feature of this summer's currency market.

The Dollar has seen improved fortunes since U.S. employment data was released last Friday that suggests there is little reason to be pessimistic on the U.S. economy.

The rally in the Dollar comes ahead of a key appearance by U.S. Federal Reserve Chairman Jerome Powell before Congress on Wednesday; markets are expecting his words to be more 'hawkish' than of late.

"Market pricing still looks confidently for a 25bp cut at the end of the month but short-term positioning suggests a bias to look for a slightly less dovish take from Mr Powell," says Kit Juckes, a foreign exchange strategist with Société Générale in London.

"Investors were reluctant to row against a U.S. positive tide as Fed governor Powell might keep a balanced, even cautiously positive tone on the US economy even as he supports the idea of pre-emptive Fed rate cuts," says Mathias Van der Jeugt, an analyst with KBC Markets in Brussels.

The moves mean the Pound enters its seventh day of losses against the Dollar.

Peter Stoneham, an options analyst with Reuters says the January flash crash low at 1.2409 is now in sight for GBP/USD.

"With little support below, the market might exploit a thinning daily chart," says Stoneham.