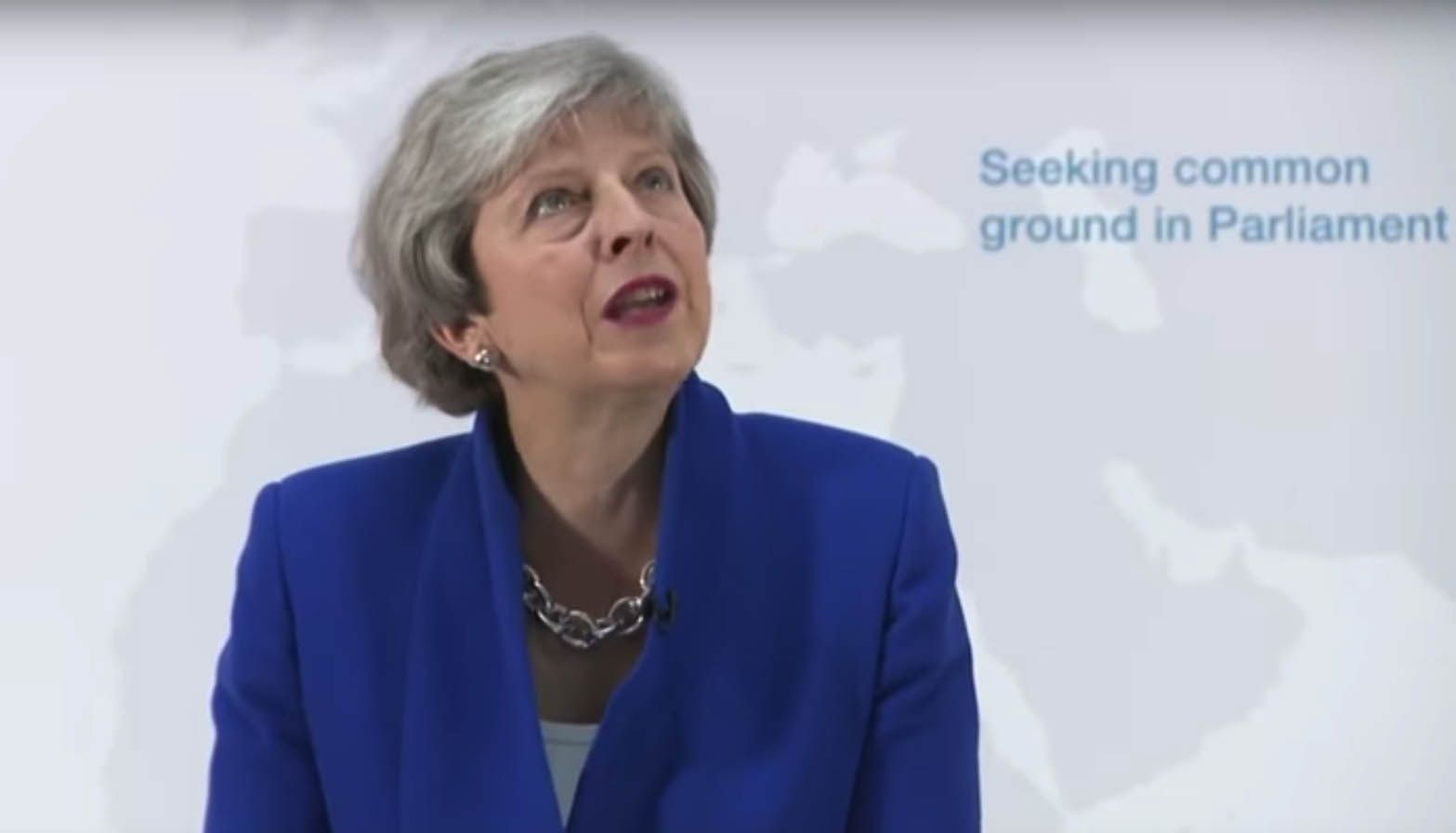 A day of speculation and rumour that the UK Prime Minister will soon announce her resignation has seen the British Pound trade in erratic fashion on Wednesday, May 22.

Reports that May's senior ministers were set to abandon her following a sharp backlash from the Conservative party over her latest attempt at securing a Brexit deal.

With Cabinet support fading fast rumours started to emerge that a resignation could be announced as early as tonight.

"When I ask senior minister whether Theresa May will be told later today she has lost support of significant proportion of her cabinet, the reply is “something is going on”. Also junior ministers telling PM to pull looming 4th Brexit vote (the WAB). Will TM still be PM tonight?" asks Robert Peston, ITV's political editor.

The Evening Standard reports senior ministers were this afternoon discussing sending a delegation to tell Theresa May she should resign after botching her “last chance” at a Brexit deal.

"At least four ministers were said to be in talks about calling time on the Prime Minister after her attempt to get cross-party backing for a new plan hit a wall of opposition," says the report.

However, at the time of writing political reporters are saying no major announcement is due today and May will try and sit out the weekend and coming recess.

There is certainly a sense that we are in the final days of May's leadership and its a matter of when her exit is announced.

The Pound has fallen and risen amidst the rumours, but the overall theme is one of enduring weakness with the Pound suffering virtually unanswered declines against the Euro and Dollar over the course of May.

"The May-bot, as she is sometimes referred to in the press, has just experienced yet another cataclysmic political circuit failure," says Michael Every, a Senior Strategist with Rabobank. "It’s perhaps not a surprise that GBP is struggling to hold on."

The pressure is on, and the Pound is nervous.

The Pound-to-Euro exchange rate went as low as 1.1311 earlier in the day before paring back to 1.1359 at the time of writing. 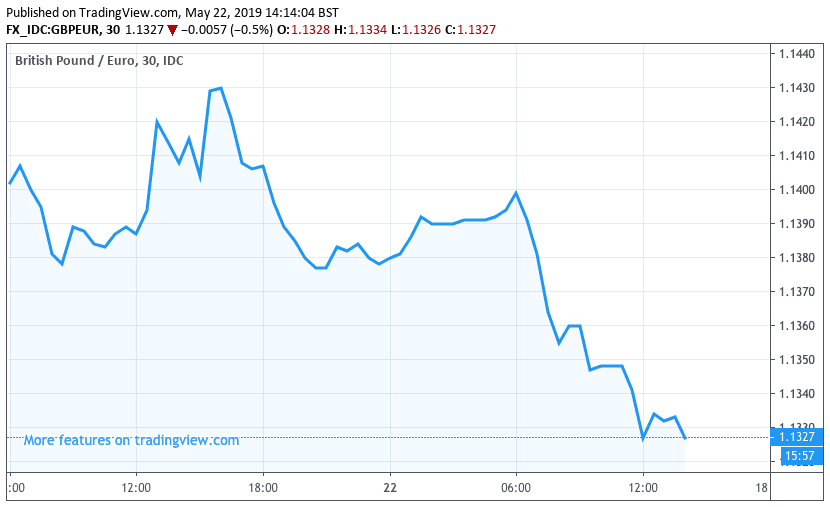 At an appearance at the regular midweek Prime Minister's Questions, May indicated she is nevertheless pressing ahead with getting the Withdrawal Agreement Bill before parliament despite growing pressure for her to pull the legislation owing to seemingly insurmountable resistance.

May is making a final pitch to push a Brexit deal through Parliament, offering up a number of sweeteners primarily aimed at enticing opposition Labour Party supporters into backing her deal.

Ahead of Tuesday's announcement of 'the new deal' the Pound rallied sharply on rumours that a second referendum was to be one of those sweeteners.

However in a speech delivered in London, May said she would not in fact be offering a second EU referendum outright, rather Parliament would be given the chance to vote on whether to put the final deal to the public in a referendum.

The exact question to be asked was unclear, but May said the opportunity to have any referendum was conditional on Parliament first passing a Brexit deal.

Overtures to Labour on the Customs Union were also made whereby Parliament would decide on the nature of any Customs Union.

The Pound-to-Euro exchange rate rallied to 1.1455 and the Pound-to-Dollar went as high as 1.2780 on the developments.

Gains were however rapidly given back as the responses of MPs from across the House came rolling in.

Labour leader Jeremy Corbyn said his party would not support the prime minister's latest attempt to get her Brexit withdrawal bill through the House of Commons.

"It’s basically a rehash of what was discussed before," Corbyn said. He added that the proposed 'new deal' from May "doesn't make any fundamental moves on market alignment or the customs union".

The Pound "remains heavy," says Kim Mundy, an analyst with CBA, "UK Prime Minister Theresa May looks unlikely to get her Withdrawal Agreement Bill (WAB) through Parliament. This is despite trying to sweeten the package by promising a vote on the form of a possible customs union or a vote on another referendum."

Northern Ireland's DUP - which the Government relies on to pass legislation in the House of Commons - have also come out against May's 'new deal'.

The DUP's Westminster leader Nigel Dodds made clear in an interview with ITV that his party will oppose May’s deal for fourth time while being very open about what he wants from her successor to reclaim the support of his party.

"Consensus is increasingly shifting towards a scenario where either Brexiteer Boris Johnson or Labour’s Corbyn is set to take the UK through some form of Brexit and both are seen by markets as Pound-negative," says Jakob Christensen, Chief Analyst with Danske Bank.

Conservative Party MPs who had backed May's deal on its third attempt to get through parliament were quick to dismiss the latest offer.

"I cannot support this convoluted mess. That it takes us towards a rigged referendum between her deal and no Brexit is just grotesque. The PM must go," said Zac Goldsmith, a Brexiteer who had switched from opposing to supporting May's deal last time around.

It is the support of Conservative MPs such as Goldsmith who May as to keep on side in order to succeed.

According to media counts, there are now 60 Conservative MPs willing to vote against the Prime Minister, with 26 of those switching from having previously supported the deal.

Boris Johnson, who previously supported the PM's deal, also withdrew support saying the new offer is “directly against our manifesto - and I will not vote for it. We can and must do better - and deliver what the people voted for.”

The prospect of May's latest deal falling, and her resignation, make for a cocktail of uncertainty that will likely keep the Pound heavy over coming days and weeks.

"Until we have more clarity on the outlook of Brexit, GBP will continue to trade within a volatile range," says Mundy.

Sterling has been under pressure through the course of May, with losses accelerating as it became clear a change of Prime Minister was all but likely this summer, with a new leader being in place by late-Summer / early-Autumn.

Consensus suggests a 'Brexit at all costs' will be pursued by any new leader looking to quash the threat of the newly-formed Brexit Party.

That next leader might be Boris Johnson, a favourite amongst Conservative grass-root members.

We suspect Johnson would strike a robust stance on Brexit to suck the wind out of the Brexit Party, potentially even offering to work with them.

Should he feel the wind is behind his back he might call a snap General Election to give him the Parliamentary majority he would desperately need to govern effectively,

"Boris Johnson becomes PM in early September on a 'no deal if we have to' platform," says JP Morgan strategist Malcom Barr on his bank's latest base-case scenario predictions.

"The EU refuses his central objective of removing the backstop from the Withdrawal Agreement," says Barr, "the Commons begins the process of legislating to force Johnson to seek an Article 50 extension, and Johnson calls a general election seeking a mandate for his approach."

It is clear the political environment in the UK remains murky and the heightened uncertainty will almost certainly play heavily on Sterling.