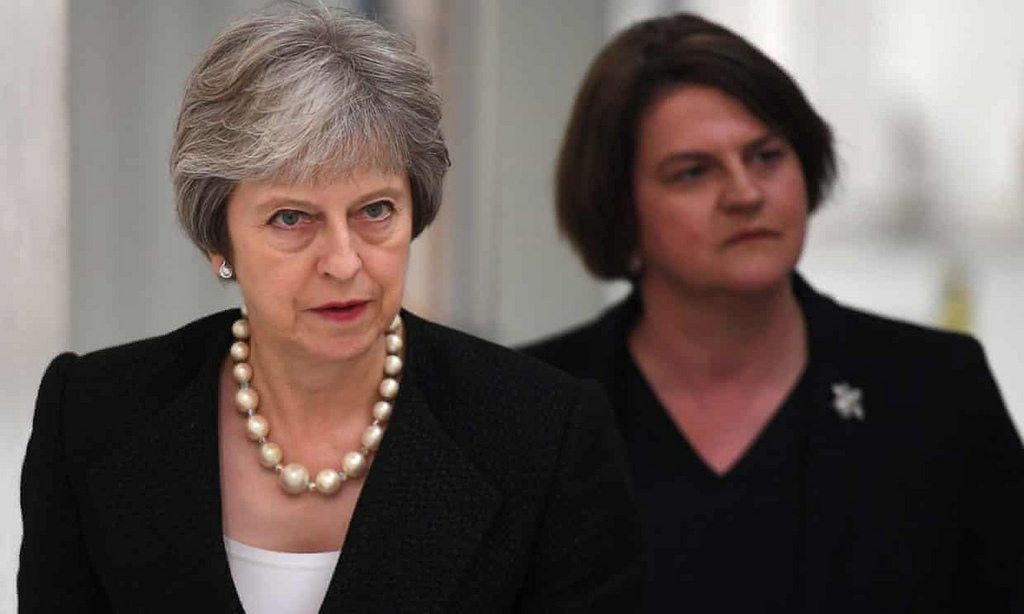 Above: Prime Minister May and the DUP's Foster. Earlier reports the DUP might support a customs union, since denied, had seen Sterling push to fresh highs. Image Source: Flickr, Commercial Use License.

- Pound pares gains ahead of the weekend,

Pound Sterling is on the front-foot ahead of the weekend, rising to a fresh two-month high against the Euro and Dollar as Brexit headlines continue to hit the markets in thick and fast. We reported earlier that while Sterling has enjoyed a strong rally this week we were aware the currency is starting to look overbought on some measures, and even the slightest negative news could prompt a setback.

From a purely technical perspective, short-term momentum lies with Sterling with our latest technical analysis suggesting the current trajectory of the market can take GBP/EUR above 1.15.

The fundamental fuel behind the positive technical momentum in GBP/EUR and other Sterling-based currency pairs appears to be the ongoing discounting of a 'no deal' Brexit from taking place on March 29. For foreign exchange markets this outcome is considered the worst Brexit scenario from an economic stand point and therefore if the odds shift away from it, Sterling benefits.

Since the defeat of Prime Minister Theresa May's Brexit deal on Tuesday night, markets have lowered the odds of a 'no deal' Brexit taking place, believing the defeat allows a pro-Remain parliament to wrest control of the process.

While such an outcome might be good for Sterling near-term, the longer-term implications of the political class apparently seeking to overturn the June 2016 referendum result is another matter altogether and could create longer-term instability.

For now though, the move away from 'no deal' is a positive for Sterling and developments over the past 24 hours continue the theme of 'no deal' becoming more remote.

The Telegraph reports that a good chunk of Prime Minister May's cabinet will resign if Conservative party MPs are given a directive to vote against any moves in the House of Commons designed to eliminate a 'no deal' as being a possible Brexit outcome.

The report says as many as 20 mid-ranking ministers are prepared to quit Government and the PM will come under pressure to give ministers a free vote. With all opposition parties likely to vote on moves to kill a 'no deal' we suspect the added Conservative votes would make the passing of such efforts a dead certainty.

On Monday we'll see at least two motions laid against the PM's amendable motion on its Brexit plan. The motion brought forward by Nick Boles would legislate to force the government to sue the EU for a nine-month delay to Brexit, in the event it becomes clear the UK is heading for 'no deal'. A Spelman/Dromey motion would meanwhile express the will of Parliament against 'no deal'. (Can these really overide legislation that says the UK is leaving on March 29, deal or no deal? We are not quite convinced).

May cannot afford to haemorrhage more ministers, certainly not on the scale being suggested, therefore the government might have to fold to such demands.

Meanwhile, the European Union's desire for a pro-EU outcome to emerge from the UK's domestic political deadlock on Brexit becomes clearer with the frontrunner to become Germany’s next chancellor issuing what The Times describes as "an 11th hour plea for Britain to change its mind and stay in the European Union".

Annegret Kramp-Karrenbauer, the new head of Angela Merkel’s party, is the most senior German politician yet to openly appeal to the UK to abandon Brexit.

"Britons should equally know that we believe that no choice is irreversible. Our door will always remain open: Europe is home," says Kramp-Karrenbauer in a letter to The Times.

We reported yesterday our view that the European Union senses a shift towards a softer Brexit, or no Brexit at all, in UK politics. They are therefore unlikely to give Prime Minister May any help when it comes to getting changes in the Brexit deal pertaining to the Northern Ireland backstop. These changes are a must if May is to secure the support of Northern Ireland's DUP and the majority of the Brexit 'purists' in her own party.

Time to move your money? Get 3-5% more currency than your bank would offer by using the services of foreign exchange specialists at RationalFX. A specialist broker can deliver you an exchange rate closer to the real market rate, thereby saving you substantial quantities of currency. please see here.

The big news of the day for us was a report, in the Times suggesting Northern Ireland's DUP party could pivot to supporting some form of customs union, that kept the whole of the UK in a customs union with Brussels, senior sources have told The Times.

"In a break from Conservative Brexiteers, leading figures in the DUP have indicated that they could sign up to a Norway-style deal with a customs union if it removed the threat of the Northern Irish backstop," says Oliver Wright, Policy Editor at the Times.

We know a good portion of Labour MPs would support a customs union; this suggests such an outcome could well pass through the House of Commons.

And keep in mind, May has to get the DUP on her side if her government is to effectively govern, therefore she might have to go where the DUP takes her. The news was ultimately supportive of Sterling, but it has since been firmly rejected by DUP leader Arlene Foster.

“The report published in the Times this morning about the DUP is inaccurate and no doubt designed to undermine efforts to get the necessary changes to the Withdrawal Agreement," says Foster in a statement. "For the future we want an agreement which returns control of our money, our laws and our borders through a U.K. wide free trade arrangement with the EU."

The report has been denied, but as is so often the case with the Brexit story, the proverb  'no smoke without fire' often proves to be a useful rule of thumb.

Increased Prospects for a Second Referendum

Meanwhile, the probability of a second Brexit referendum has risen over recent days, according to analysts, who see such an outcome as being largely positive for Sterling.

A report in The Sun says "cabinet ministers are ready to back a second referendum that could see Brexit cancelled altogether."

Ex-minister Phillip Lee, who quit over Brexit last year, claimed there were many more MPs who were ready to join them, but was a "big task" to get everyone on side.

He said "conversations" were happening all the time but it was a "minority sport" at the moment.

Analysts at RBC Capital Markets say the chance of a second referendum taking place is at around 40%, but "there is headroom for it to rise further and the markets’ revealed preference is that would be GBP-positive."

Germany's Foreign Minister Heiko Maas is back on the newswires this morning, this time saying a discussion should be held on whether to re-open the draft deal for Britain's planned exit from the European Union.

Maas says this would however only be possible if all EU members agreed.

Maas told public broadcaster ZDF late on Thursday he had spoken to Britain's foreign minister, adding that it had become clear this week that there was no majority for a no-deal Brexit in the British lower house.

"So the question is what the deal looks like," he told ZDF. "In the end, it will be about the question (of) whether to reopen the deal which needs the approval of all 27 member states, which means that everyone has to join in. This is what needs to be discussed now."

This is good news for Prime Minister May as it suggests her preferred option of getting the Withdrawal Agreement reopened to secure legal assurances that the Northern Ireland backstop can only ever be temporary, is an option.

Time to move your money? Get 3-5% more currency than your bank would offer by using the services of foreign exchange specialists at RationalFX. A specialist broker can deliver you an exchange rate closer to the real market rate, thereby saving you substantial quantities of currency. please see here.

The Pound appeared to falter on Friday after official data revealed a steeper-than-expected fall in retail spending during December, although losses have been shallow given the latest developments in the Brexit process, which could now support the currency into the new week.

Retail sales fell by -0.9% during December, partially reversing a downwardly-revised 1.3% increase seen back in November, and below the consensus for a -0.8% decline. All types of store except those in the food and fuel categories saw turnover decline during the month.

"This is mostly due to the unwinding of the Black Friday boost but it could also be evidence that Brexit uncertainty is starting to weigh on consumer spending," says Thomas Pugh, an economist at Capital Economics.

Sales fell in both value and volume terms, according to the Office for National Statistics, for December and the fourth quarter as a whole. However, on an annual basis volume growth was less than the increase in the value of spending.

Total spending on the high street was up 3.7% for the year to the end of December while volumes increased by 3%. However, when fuel sales are excluded those numbers come down to 3.1% and 2.6% respectively.

"It’s clear that retailers have had a tough start to the year. On a quarter-on-quarter basis, sales volumes fell by 0.2% in Q4. That drop is not unprecedented—volumes fell by 0.3% in Q1—and it follows two quarters of strong growth, but it nonetheless suggests that consumers have tightened their purse strings amid rising concerns about Brexit," says Samuel Tombs, chief UK economist at Pantheon Macroeconomics.

Financial markets care about the data because of what it means for economic growth and the influence consumption can have on inflation. It's inflation that central banks are attempting to contain when they raise interest rates.