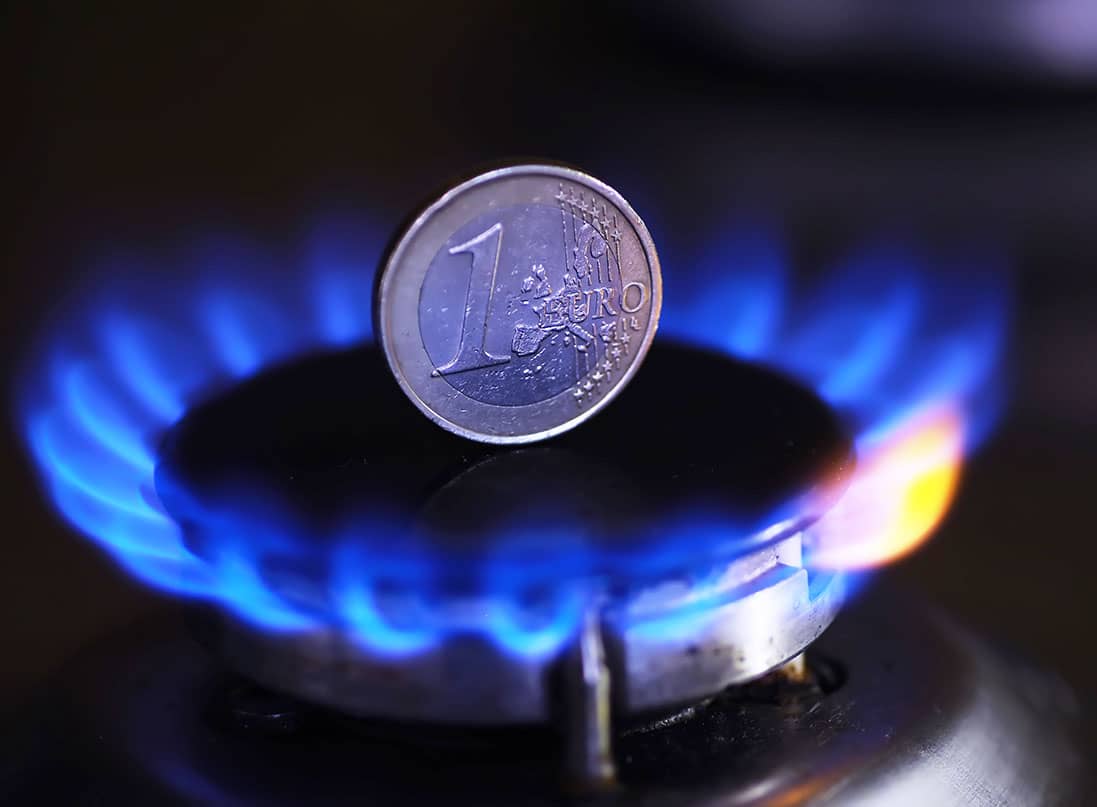 Surging European gas prices are likely to keep the Euro under pressure say analysts who now fear a deep recession in the Eurozone over the coming winter.

Euro exchange rates fell sharply as European gas contract prices shot higher as it was revealed Russia would further throttle back gas supplies to European markets in retaliation for Europe's support of Ukraine.

The Nord Stream gas pipeline will run at 20% of capacity at a crucial period when European economies look to reload storage ahead of the winter.

Bloomberg has quoted people familiar with the Kremlin's thinking as saying Putin is using the disruptions in Nord Stream to raise the political heat on European leaders to reconsider the sanctions they've imposed as part of their wider support for Ukraine. 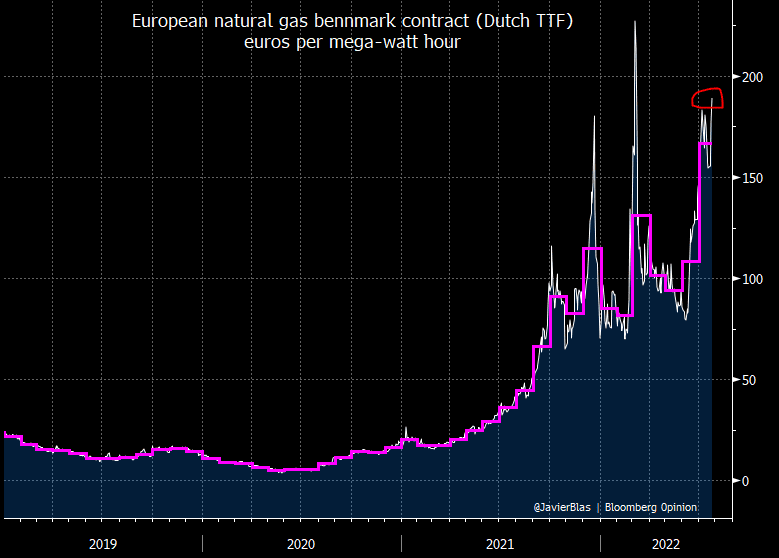 Above image courtesy of @JavierBlas

Russia's latest move to cut natural gas supply to Europe meanwhile intensified global competition for LNG, the type of gas that is supplied in liquid form via tankers from the United States, West Africa and Qatar.

Asian importers are reportedly accelerating plans to buy LNG cargoes for winter out of fear Europe will hoard supply.

As a result LNG prices are also seen surging, going to mid-$40s/mmbtu.

"The risk that Russia cuts off the gas completely and paralyses economic powerhouses like Germany during the winter is hanging like a sword over the euro," says Marios Hadjikyriacos, Senior Investment Analyst at XM.com.

The Pound to Euro exchange rate rallied half a percent at one stage on Tuesday to reach 1.1863, taking bank account euro payment rates to 1.1626 and FX specialist rates to 1.1830, the highest in two weeks.

The Euro-Dollar exchange rate fell back 0.80% of a percent to quote at 1.0133, bank accounts were offering rates well below parity at 0.9873 but some specialist providers were still quoting above parity. 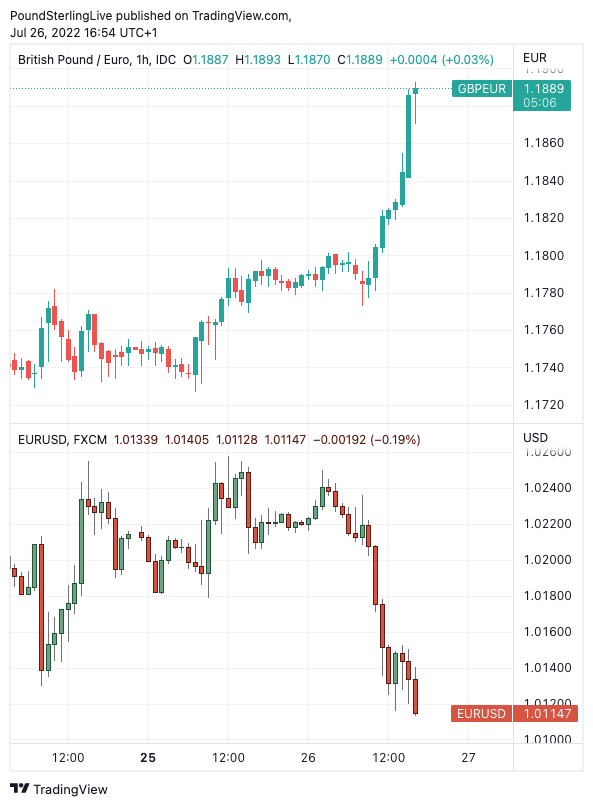 Above: GBP/EUR (top) and EUR/USD (bottom) at hourly intervals.

Economists at Credit Suisse announced Tuesday they were lowering their GDP forecasts for the Eurozone in light of recent developments, predicting negative GDP growth through 2022:Q3 through to 2023:Q1.

The largest contractions are seen in Germany and Italy, countries with large manufacturing sectors that are highly reliant on Russian gas. 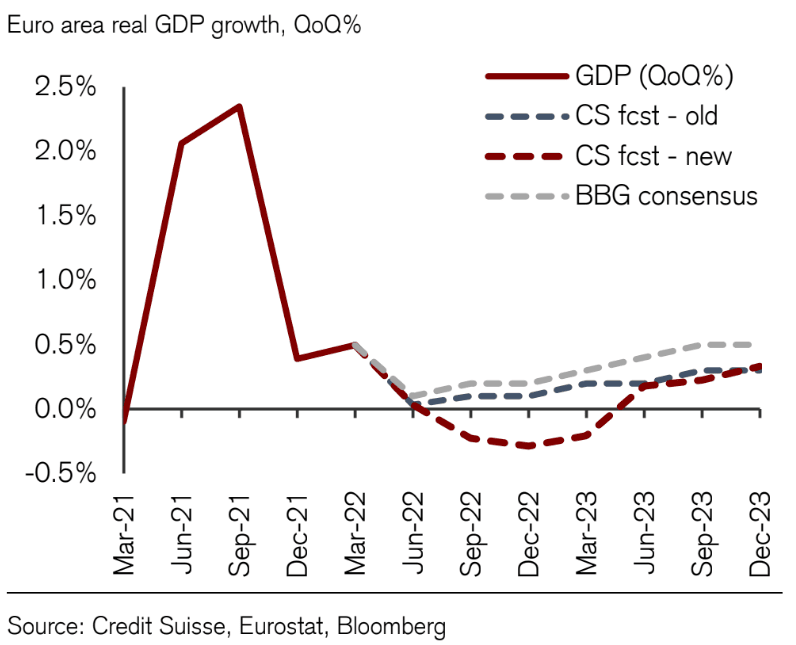 Above: "We now expect the economy to slide into recession in Q3 of 2022" - Credit Suisse.

"The euro area’s supply crisis is worsening, as record droughts risk blocking major cargo routes in Germany and recession risks are clear to see in the data. When combined with the gas crisis (Nordstream 1 flows could fall to 20%) and the notable lack of a EUR rally after the hawkish ECB meeting, we remain short EUR/USD and look for a breach below parity towards 0.95 in the weeks ahead," says Jordan Rochester, a foreign exchange strategist at Nomura.

"Europe is on the brink of disaster, which could potentially lead to its breakup... We could move to a place where the dollar is not strong against everything but the euro gets weak against everything," says Edouard de Langlade, Chief Investment Officer at EDL Capital.

This is however highly unlikely given the UK is also exposed to European gas woes: although Europe and the Euro form the nexus of the Russian gas squeeze, the UK is also seeing rising prices.

This explains that while the Pound is up against the Euro it is down against the U.S. Dollar and further Euro-Dollar depreciation will therefore not necessarily translate into an equal Euro-Pound depreciation.

The context of the rise in UK wholesale gas prices is staggering as they are now nearly 1000% higher since the start of the crisis in late 2021, when Russia began to tighten supplies eyeing an invasion of Ukraine in the new year.

The ongoing rises suggests UK households will see energy costs almost double when the cap is reviewed again in October.

UK inflation will surge well above 10% as a result, heaping pain on businesses and consumers.

So while Euro-Dollar looks heavy, a decline in Pound-Dollar is also likely.

Ultimately where Euro-Pound goes will depend on whether the Euro-Dollar decline outpaces that of the Pound-Dollar.

Given the Eurozone is more at risk of Russia's gas wars, this is likely, suggesting some Sterling appreciation against the Euro can be expected.