The Pound moves through the mid-week period with some wind at its back having unexpectedly popped higher against the Euro, Dollar and the majority of global currencies thanks to substantial technical demand in the run up to the Tuesday London fix.

The fix is when the London market officially closes and the exchange rate set around this time is considered the benchmark for the day.

The fix tends to grow in importance as the month-end approaches and investment asset managers rebalance their multi-trillion dollar portfolios to account for currency moves over the past month. (There is a great explainer here for those wanting to learn about what the fix is and how it works.)

For those not wanting to delve into the workings of the market the important takeaway regarding the fix is that it is technically driven and not necessarily a fundamental move.

Therefore, the move can often be reversed in short order and those watching the market should be alert to volatility as the turn of the month approaches. 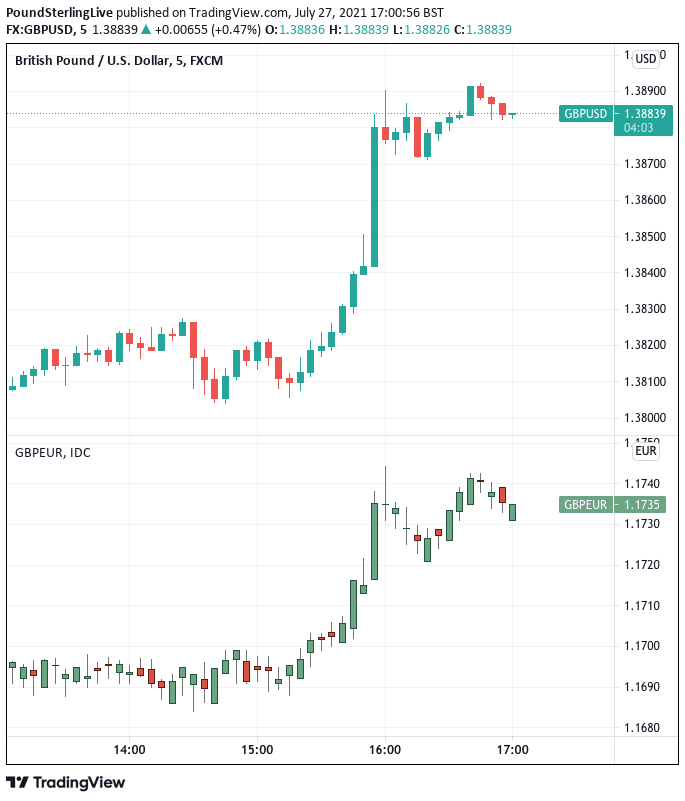 Above: A strong impulse of buying was seen in the run up to 4PM, a classic symptom of fix-related demand.

The next major objective for the GBP/EUR rally is the three-month best reached on July 14 at 1.1758.

The rally in the Pound might be technically inspired in the short-term but it has some legs in the improved fundamental picture of late.

The UK looks to be undergoing a rapid reduction in Covid cases which is in turn supporting expectations for UK economic growth.

Data out on Tuesday showed a substantial 49.5% decline in Covid-19 cases week-on-week, making for a sixth successive decline in daily cases which suggests the peak in the 'third wave' has now been passed.

Ian Shepherdson, Chief Economist at Pantheon Macroeconomics says cases in England are tracking the Scottish path with a lag of about 18 days, suggesting further declines ahead.

The receding pandemic is expected by economists to boost business investment intentions as well as consumer confidence levels over coming weeks.

Both consumer sentiment and business investment intentions have suffered a setback over recent weeks as cases grew, even as lockdown restrictions eased.

"We believe that reaction functions and exit strategies are starting to become more important market drivers, both for monetary policy accommodation and Covid. They are linked of course, as exit from Covid restrictions will see the closure of output gaps. The UK and US look to have started their Covid exit strategies," says Paul Robson, Head of G10 FX Strategy at NatWest Markets. 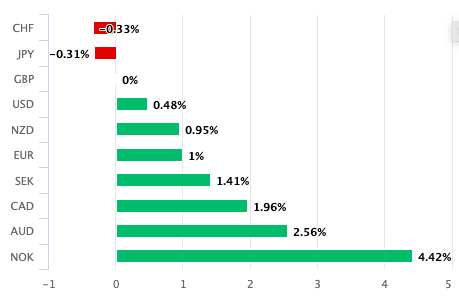 Above: The Pound has advanced against most peers over the course of the past month.

NatWest Markets are backing a stronger Pound against the Euro over coming weeks as they see the European Central Bank as being resolutely more cautious on exiting their supportive monetary policy conditions than the Bank of England.

But, analysts at Goldman Sachs say the next "couple of weeks" should nevertheless still be challenging for UK economic data and as a result they are cautious about the Pound's near-term outlook against the Euro.

"The next couple weeks of data will be important to gauge how the economy—and the health situation—are evolving with fewer activity restrictions," says Zach Pandl, co-head of foreign exchange strategy for Goldman Sachs.

Goldman Sachs says the Bank of England will likely maintain a slow and cautious approach to raising interest rates, a stance that will ultimately act as a handbrake to any upside shifts in the value of the Pound.

The Bank's thinking will come into sharp focus in August when their monthly policy meeting coincides with the release of key quarterly economic forecasts.

It is at these meetings that any major shifts in policy are signalled.

While the degree of spare capacity the economy remains a source of debate amongst Bank of England policy makers, and the balance has possibly shifted a bit in recent months, Goldman Sachs' economists think the core of the committee remains convinced that there is significant slack in the economy and that the recent high inflation readings are temporary.

"Together with their expectation that the BoE will announce a shift in the exit sequencing at the August or possibly November meeting - favouring a shrinking of the balance sheet before hiking rates - market pricing for liftoff still seems aggressive," says Pandl.

"With this in mind, we remain relatively cautious on the outlook for Sterling vs EUR over the near term," he adds.

Nevertheless, looking at the longer-term picture for the Pound Goldman Sachs say while the recent activity data have looked more mixed, they are inclined to stick with their 2021 "upbeat baseline view of a sustained recovery ahead."

Analysts at Capital Economics - an independent research house and consultancy - have meanwhile said they expect the Bank of England will disappoint those looking for interest rate rises in 2022 and this will suppress the British Pound's outlook.

Owing to a recent slowdown in economic data Capital Economics say they now think the Bank of England will tighten policy in August 2023 which is later than the mid-2022 priced into the markets.

Economists also expect oil prices to trend lower, which will hit the energy-heavy FTSE 100, while a lethargic move to higher interest rates at the Bank of England will ensure the FTSE's financial names will remain unattractive.

As such Capital Economics told clients they have downgraded their forecasts for the Pound, expecting the Pound-Euro exchange rate to be at 1.17 at end-2021 and Pound-Dollar to be at 1.35.