The Pound-to-Euro exchange rate rose to a one-week high on Thursday amidst a broad-based sell-off in the Eurozone's single currency that saw it lose ground against all its major peers.

Highlighting this under-performance is data that shows the Euro to be the worst performing of the Group-of-10 of the world's largest and most liquid freely traded currencies:

Interestingly, the performance was most evident against the 'high beta' currencies that include the New Zealand Dollar, Pound and Australian Dollar. High beta simply means these currencies have a positive correlation with equity market returns, i.e. they rally when markets are going higher.

While European markets are looking a little more settled on Thursday, they are by no means burning holes in the ceiling as they shoot higher. 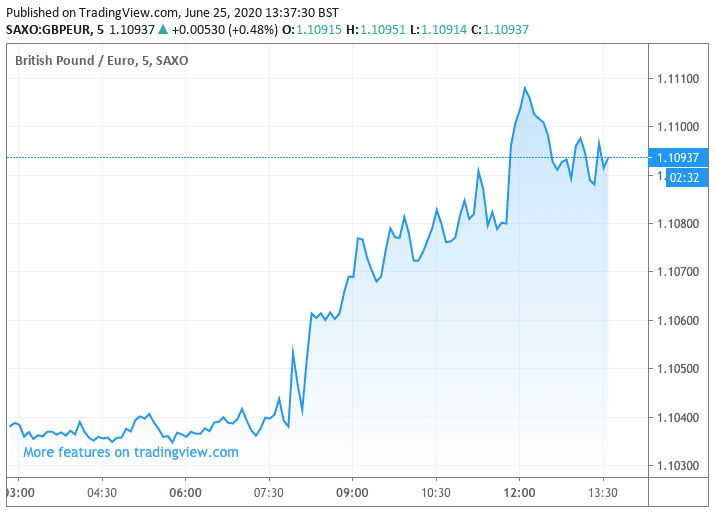 There is a clue to the strength in the GBP/EUR move in the above 5-minute chart, as Pound Sterling started ascending against the Euro around about when European equity markets opened to the day, which suggests the climb could have something to do with flows related to the buying and selling of stocks.

But if we look at the headline Euro-to-Dollar exchange rate, which can often dictate how the entire Euro exchange rate complex trades, we can see the single-currency has been in a trend of decline for over 24 hours now, which will have certainly aided GBP/EUR higher: 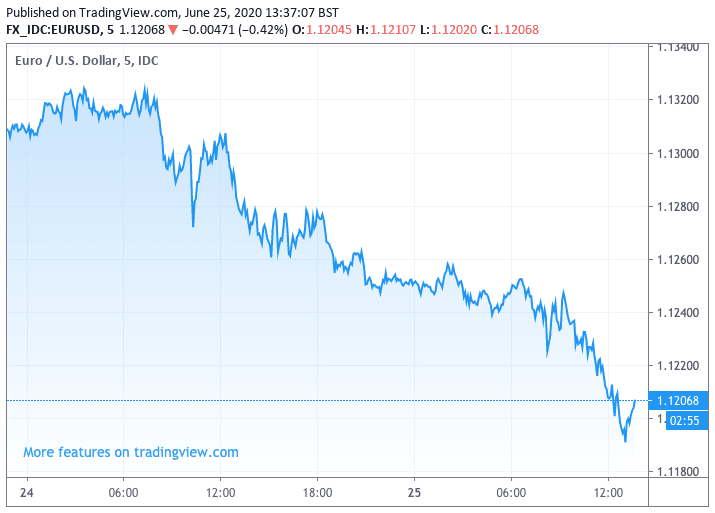 News concerning the Euro on Thursday was that the European Central Bank had set up swap lines with other central banks, which allows the ECB to make euros available in times of market stresses. However, this should not have much of a fundamental impact on how the single-currency trades.

Rather, the decline is a move that is best summed up by Stephen Gallo, European Head of FX Strategy at BMO Capital Markets:

Another potential factor to consider are options market expiries, where contracts for billions of pounds worth of currency change hands as they reach the end of their term. The following from Thomson Reuters shows significant volumes of Euro being in play:

"We reckon that this morning’s large 1.6BN EUR expiry at the 1.1200 strike could be playing a part in this morning’s EUR weakness as well," says Erik Bregar, Head of FX Strategy at Exchange Bank of Canada.