Pound Sterling retains a positive bias against the Euro, with the GBP/EUR exchange rate rising to hit a 7-week high over the course of the past 24 hours and there is a chance the ongoing recovery can extend we are told.

The gains come as markets believe the prospect of a 'no deal' Brexit has been reduced by Parliament's passing of a law that means the Prime Minister has to request an extension to the Brexit deadline on October 31.

In addition, Parliament last night voted down the Government's proposal that a General Election should take place before October 31, further ensuring a Brexit delay cannot be scuppered were the Conservatives to win any snap General Election.

Recent political developments have "narrowed the path to a 'no deal' Brexit, skewing near-term risks to Sterling to the upside," says Zach Pandl, a foreign exchange strategist with Goldman Sachs.

The ongoing unwinding of 'no deal' Brexit risks has ensured the Pound is the best-performing currency over the course of the past month:

The Pound has now been rising against the Euro for four consecutive weeks, and "further gains are still feasible over coming sessions," says Trevor Charsley, a foreign exchange analyst with AFEX, a foreign exchange brokerage based in London. "No direct path currently appears open back to prior 1.0725
lows." 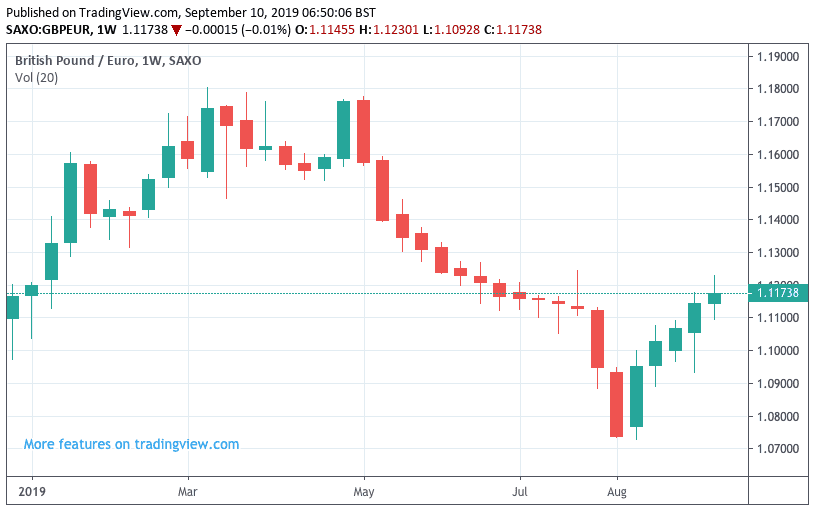 Analyst Arne Lohmann Rasmussen at Danske Bank says he continues to expect the GBP/EUR exchange rate to trade in the 1.11-1.1364 area "on the back of politics moving towards an election and delay of Brexit."

"In our view, the positive drivers for the GBP are (1) postponing a UK recession and (2) postponing tariffs. EU have yet to align with the idea of a further extension but we believe they should come around on that. The consequences of an election will be the next topic to discuss but that’s too early as of now," says Rasmussen.

Parliament will now not sit until October 14, meaning the political heat witnessed over the past week will die down, and perhaps provide more sanguine trading conditions for Sterling, which is after all a politically-charged currency.

The proroguing of Parliament now allows the Government to plan its next move on how it can deliver on Prime Minister Boris Johnson's avowed stance of taking the UK out of the EU by October 31.

We have heard over the past 24 hours that Johnson fully intends to deliver on his pledge, and is seeking ways to avoid having to ask for a Brexit delay. How this might be achieved is not yet clear, but we would expect the Pound to react to any details.

The outlook for Sterling might have improved of late, but the conditions for a sustained rally are certainly not present.

Indeed, AFEX's Charsley warns that the rebound in Sterling does have its limits.

"In broader terms this rebound is also considered unsustainable even if the next sell-off starts from somewhat higher levels. Supply will probably firm up around 1.1250 initially," says the analyst.

Goldman Sachs are meanwhile cautious of Sterling's ability to move substantially higher as they believe the odds of a General Election remain high, "and we are sufficiently unsure about PM Johnson’s likely strategy over the coming weeks to recommend new longs at this stage."

The route to a more sustained rally in the Pound would lie with the current Brexit impasse being solved by a Brexit deal being put in place, however, there appears little chance of such an outcome with the EU unwilling to negotiate on Johnson's 'red line' that is the Irish border question.

Johnson wants the Irish backstop clause, contained in the current Withdrawal Agreement, removed and replaced with a series of alternative arrangements that would ensure no 'hard' border returns to the island of Ireland.

Indeed, in a visit to Dublin on Monday Johnson reiterated that under no circumstances would the UK be erecting a customs border.

There is little chance of a deal being reached by October 31 we feel, and therefore remain wary of expecting any sustained rally in the Pound.

Markets will also now have to consider a General Election taking place before the year is out, as it is surely obvious that the current situation whereby a minority government is essentially held hostage by the House of Commons is unsustainable.

Again, we would caution that polling suggests no party is yet in a position to command a majority, and there could well be a situation where messy coalitions or confidence-and-supply agreements are formed: leaving no party with a mandate to deliver on their respective Brexit division.

So while the short-term could herald further relief for Sterling, the limits to the currency's abilities will soon become obvious.