The coronavirus cost mounted further in early June as the bill for supporting companies topped two percent of GDP and the 'lockdown' used to contain the pneumonia-inducing disease reduced household spending by a fifth, threatening a double-digit blow to the economy for each month the crisis draws on.

HM Treasury had spent £49.26 billion on income subsidies and value-added-tax (VAT) deferrals between the week ending April 23 and the week ending June 07, with some £22.4bn of deffered tax being the largest single item of expenditure while the cost of the job retention or furlough scheme reached £19.36bn.

Furlough costs rose by £2.1bn while spending on income support for the self-employed increased from £7.2bn to £7.5 billion, with 8.7 million people reliant on the government for wage payments.

The £49.26 bn cost of supporting companies and individuals through the coronavirus shutdown was equal to 2.25% of the UK's £2.18 trillion 2019 GDP in early June, but the impact of the crisis has been felt beyond the pockets of workers and is larger than the amounts the government has so-far agreed to stump up. The Office for National Statistics (ONS) said Thursday that 'lockdown' has prevented one fifth of all household spending in the UK.

"More than one-fifth of usual household spending has not been possible during the lockdown," the ONS says in a statistical bulletin. "In households where the reference person is under 30 years old, 58% of the weekly budget goes on essentials and 19% on goods and services that have been unavailable during lockdown...older households where the reference person is aged between 65 and 74 years spend far less of their budget on essentials (43%) and considerably more (29%) on activities that have been prevented."

Above: Office for National Statistics graph.

Household expenditure accounts for around 60% of GDP on some measures, the ONS has often said, so with more than one fifth of spending being prevented by the government's coronavirus containment measures the economy could be facing a contraction of around -12% from its March levels of output that remains a weight on GDP every month the so-called lockdown draws on.

The ONS will publish April GDP figures at 07:00 on Friday, revealing the cost the coronavirus imposed on the economy in its first full month of lockdown. Consensus favours a -18% month-on-month decline that would lessen in subsequent month due to statistical 'base effects,' although falls in household spending account for only a fraction of the damage done to the economy and the disruptiion is set to draw on for a while longer with some economists estimating as much as a -7% residual hit to growth through summer. 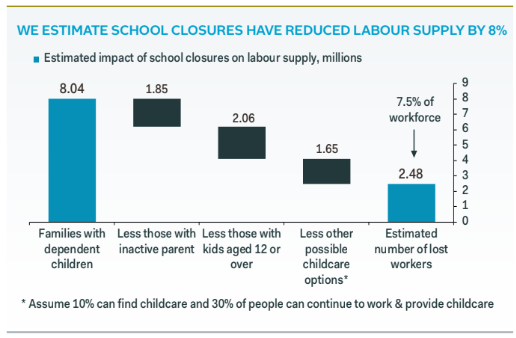 The government recently accelerated efforts to reopen the economy but has met pushback from teachers and unions who've forced ministers into a u-turn on earlier plans to have all primary school children return before the usual summer holiday. Education Secretary Gavin Williamson abandoned the plans after only half of children already required to return actually turned up. Concerns over safety, the provision of personal-protective-equipment, testing and uncertainty about how the disease effects children and elders have been widely cited.

Government says that supposedly non-essential retailers will be able to reopen from June 15 but has not updated earlier guidance that pubs and restaurants will have to remain closed until at least July 04. The pub trade produces turnover in excess of 1% of GDP per year and is responsible for almost half a million jobs so any protracted closure could necessitate continued high furlough costs.

"The UK’s public finances are in their worst position since the aftermath of the Second World War. The deficit is likely to surge to close to £330bn this year, more than five times that seen in 2019/20 and around 17% of GDP. And the government debt to GDP ratio looks set to rise from around 93% in 2019/20 to about 105% in the 2020/21 financial year," says Ruth Gregory, a senior economist at Capital Economics. "If anything, these fiscal projections may prove to be too low. They make no allowance for any major new discretionary measures in the summer or autumn as the government moves away from crisis mode and towards promoting the economic recovery. And they could be worse still if the economy is weaker that we expect. So there will be a significant step up in the government’s debt burden."