New unemployment insurance claims were 3.16 million last week, down from an upwardly-revised 3.84mn but higher than the 3.0mn anticipated by the market consensus. However, and in total the coronavirus has claimed more than 33mn jobs since the week ending March 21 amid a collapse of the labour market that's threatening to lift the unemployment rate to Great Depression era highs.

"The trend is falling; claims continue to decay by about 15-to-18% per week, and are now at less than half the 6.9M peak in the week of March 28.  If the current rate of decline continues, claims will dip below 1M in the second or—more likely—third week of June, though they would remain well above the 665K worst single week after the crash of 2008.  The recent data are consistent, we think, with a further 13M drop in May payrolls after the 22M plunge we expect to be reported tomorrow for April, but we’re very hopeful that June will see the beginnings of a rebound as states begin to reopen," says Ian Shepherdson, chief economist at Pantheon Macroeconomics. 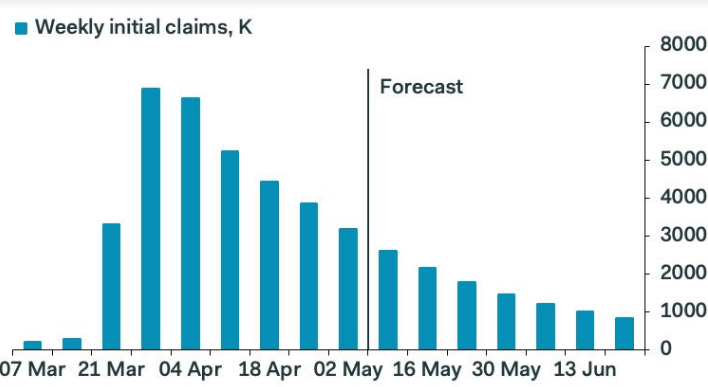 Thursday's data came 24 hours ahead of the April non-farm payrolls report which the market sees producing a 21.4mn job loss and unemployment rate of 16% that will be its highest for many decades.

Some forecasters see the unemployment rate coming in north of 20% while others say much lower and Minneapolis Federal Reserve Bank President Neel Kashkari has warned in an NBC News interview Thursday that accounting funnies will also impact upon the result. The payrolls report will be released at 13:30 on Friday, the Victory in Europe public holiday for the UK and France.

The Feds Kashkari told NBC News how not all unemployed are created equal and not all initial claims find their way into the unemployment data. The unemployed must tell Bureau of Labor Statistics staff they're actively "looking for work" in order to be counted in the survey, and there's good reasons for thinking that not all the newly unemployed will have. For instance, some may anticipate that they will soon get their old jobs back while others might have been prevented from "looking for work" by a coronavirus-inspired 'lockdown'.

Above: Total number of non-farm employees in the U.S. at quarterly intervals. Source: Federal Reserve Bank of St Louis.

"The unemployment rate will obviously surge – we look for 15.8%, but the biggest surprise could be in wages. This figure is the change in average hourly earnings. Given the bulk of the 21 million or so we expect lost their jobs in the April report worked in retail and hospitality, they will be skewed towards the lower end of the salary distribution. With these people disappearing from the calculation the figure for average hourly earnings will jump, possibly in excess of 1% month on month. This is a statistical calculation quirk and should be ignored – there is no wage growth going on in the US economy," warns James Knightley, chief international economist at ING.

Continuing insured unemployment claims were 22.64 mn for the week ending April 25, up 4.63mn from the prior week, which is important because it's the number of new welfare claims that will be taken account of in Friday's non-farm payrolls report for last month. ING's Knightley has said that with a third of 16-65 year olds already 'not looking for work,' less than half of the working age U.S. population will earn a wage in May.

This 22.64 mn is enough to lift the unemployment rate from 4.4% to 18.4% if participation remains the same and all of April 25's continuing claims are baked into the official rate of unemployment alongside last month's 7.1mn unemployed. However, and as has been pointed out by the FOMC's Kashkari, this is very unlikely. For illustration, if half the newly unemployed told the BLS they were not looking for work when surveyed then all other things constant, the unemployment rate would rise to only 11.4% and if much more than half opted to stay on lay-off the jobless rate might struggle to top 10%. This would be a statistical flaw. Kashkari said in his interview that he believes the true level of unemployment is somewhere between 23% and 24%. 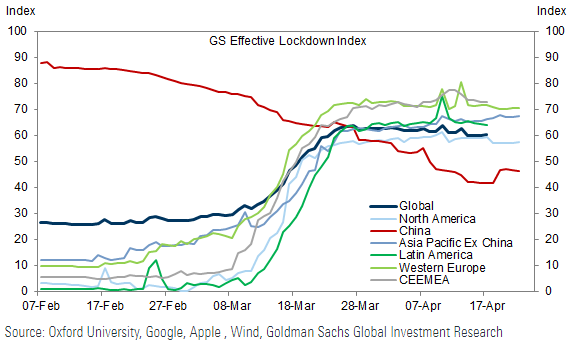 measures weigh on GDP at the global as well as regional levels.

"Recent data has started to give a clearer sense of the coronavirus-induced hit to growth, with our Effective Lockdown Index pointing to a 16% reduction in the level of global GDP through late April. After further cuts to our expectations for ASEAN and UK growth on the back of deeper Q2 downturns, we now expect global GDP growth of -3.1% in 2020. But with several countries having reached—or even moved past—peak lockdowns, we think global economic activity has reached a bottom," says Allison Nathan, a senior global macro research strategist at Goldman Sachs.

The U.S. had an official unemployment rate of 4.4% as of the end of March when the Bureau of Labor Statistics said there were 7.1mn people classed as unemployed. The U.S. economy experienced a near historic contraction at the hands of the coronavirus in the first-quarter, when GDP fell by -4.8% in a period that is typically weak due to 'seasonal factors,' a decline that surpassed even the downgraded consensus for a -4% fall.

That was a significant deterioration of fortune for an economy that grew by a steady annualised pace of 2.1% in the final quarter of 2019. It will take longer for economies to recover than it did for the coronavirus to destroy them. ING's Knightley said in April that the contraction over the first two quarters in 2020 will be greater than the GDP loss seen over three years in the wake of World War II, the end of which produced an industrial downturn.