The British Pound extended a short-term rebound after the release of data showing although the UK economy shrunk in November business expectations for the year ahead rebounded from a 30-month low.

The latest S&P Global PMI readings confirmed another month of declining economic activity, however the data was better than expected, and for markets this would therefore be a broadly positive outcome.

The manufacturing PMI read at 46.2, which is a better outturn than the 45.7 the market was expecting and unchanged on October's 46.2.

The composite PMI - which rebalances the data to give a better account of the broader economy - read at 48.3, which is stronger than the 47.2 the market was expecting and up slightly on October's 48.2.

Readings below 50 are consistent with economic contraction and the numbers therefore suggest the UK economy is on course to register a second consecutive quarterly decline, meeting the technical definition of a recession.

But, this recession is expected and as Kallum Pickering, economist at Berenberg, puts it: "the recession is bad, but not getting worse."

For the Pound, this is a crucial observation, given the intense negativity over the UK's economic outlook.

The incessant barrage of bad news means any upside surprises can be met with an appreciation in the Pound.

Indeed, the Pound to Euro exchange rate extended a morning rally to 1.1584, having been at 1.1493 earlier in the day. The gains take euro rates on offer at a typical bank account to approximately 1.1314 and those at competitive payment specialists to around 1.1510. 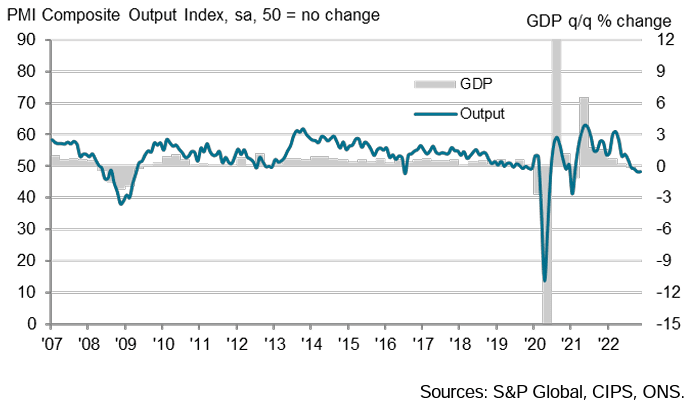 The data confirms the UK economy is in contraction and new orders decreased at the fastest pace for almost two years "as squeezed client budgets continued to hit demand in both the manufacturing and service sectors," said S&P Global.

But business expectations for the year ahead rebounded from the 30-month low set in October.

The Pound's fall against the Dollar meanwhile appears to have helped some businesses with some reporting "only a slight drop in new work from abroad, with some firms reporting a boost from exchange rate depreciation and robust demand from US clients," said S&P Global.

There were further signs of labour market tightness as employment numbers continued to rise in November, although falling volumes of incoming new work contributed to a slower rate of job creation.

The latest increase in private sector employment was only marginal and the weakest recorded for 21 months. 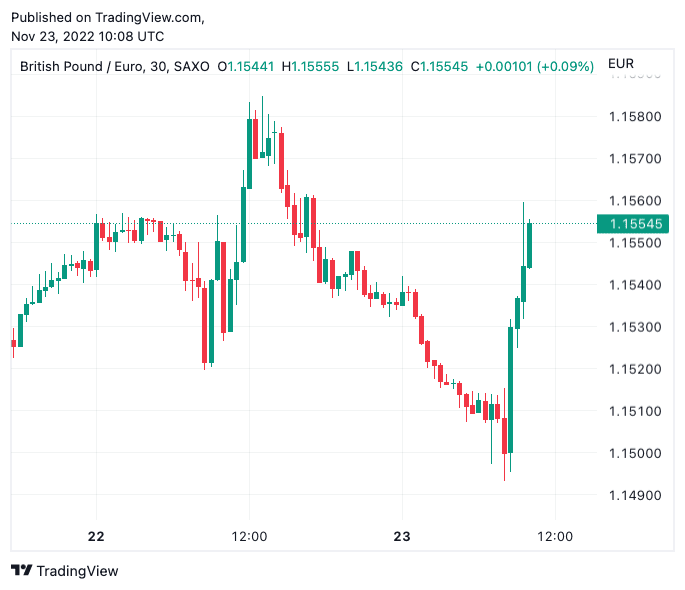 Above: GBP/EUR was bid through the London morning session. If you are looking to protect or boost your international payment budget you could consider securing today's rate for use in the future, or set an order for your ideal rate when it is achieved, more information can be found here.

Inflationary pressures meanwhile remain elevated owing to surging energy bills and higher wages, signals that will maintain expectations the Bank of England will continue to raise interest rates into 2023.

There were some positives for the Bank of England as prices charged by UK private sector companies meanwhile increased at the slowest pace since August 2021, which a number of survey respondents attributed to weaker customer demand and greater competitive pressures.

S&P Global reported worries about political uncertainty were much less prevalent among the comments provided by survey respondents compared to those seen in October following the UK government’s ‘mini-Budget’.

Nevertheless, the latest reading still pointed to the second-lowest degree of business optimism since May 2020.

"While the recent change of government has resulted in improved business confidence, the business mood remains among the gloomiest seen over the past quarter century amid the numerous headwinds, which include the cost of living crisis, the Ukraine war, steepening export losses (often linked to Brexit), higher borrowing costs, fiscal tightening and heightened political uncertainty," says Chris Williamson, Chief Business Economist at S&P Global Market Intelligence.

Tombs says the PMI data is consistent with quarter-on-quarter contraction in GDP of around 0.2% in Q4, which would add to the third quarter’s 0.2% decline, meeting the conditions for a technical recession.

"We expect the recession to deepen early next year, as households’ real disposable incomes are hit hard when energy bills support is withdrawn substantially by the government in April," says Tombs.

Pantheon Macroeconomics calculates real incomes will fall by around 2.0% in 2023, causing consumption to fall by a similar amount.

Real GDP, therefore, looks set to drop by around 1.5% next year.

However, the recent plunge in shipping costs and slowing in producer price rises suggests to Pantheon that core goods CPI inflation will slow soon.