"Entrepreneurs are being penalised with the increase in taxes on both capital gains and dividends" - Hargreaves Lansdown. 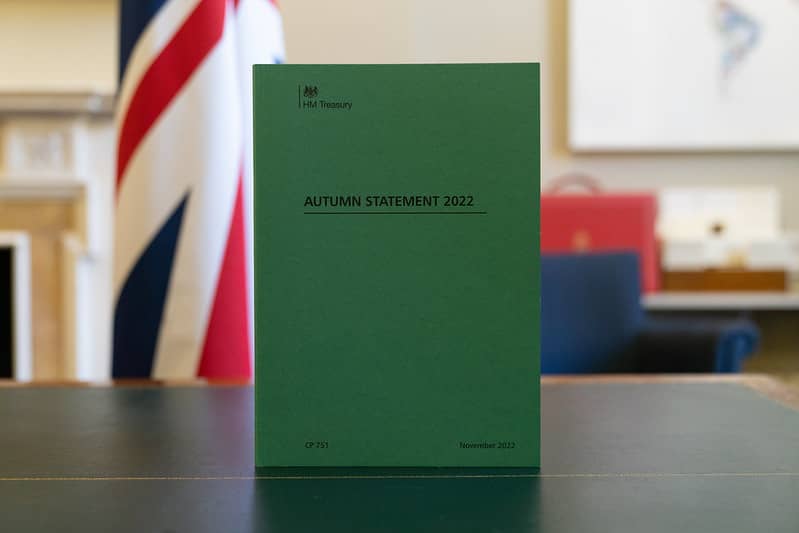 Above: Cover of the Autumn Statement 2022. Photo by Zara Farrar / HM Treasury.

It means that by 2025 anyone receiving dividends above this amount will pay tax on them at a rate depending on how much other income they receive.

"Entrepreneurs are being penalised with the increase in taxes on both capital gains and dividends, and those people who have diligently invested over the long term to build up their financial resilience will no doubt feel unfairly swiped by this grab from profits," says Susannah Streeter, senior investment and markets analyst at Hargreaves Lansdown.

The changes were announced by UK Chancellor Jeremy Hunt who said his government was introducing measures to fill a £55BN black hole in its finances over coming years.

The measures included an array of tax hikes as well as spending cuts.

"There is a risk that the government may still end up receiving less in tax because investors hoard assets. Tinkering with the capital gains tax exemptions will only penalise a minority of taxpayers but is still set to reap significant sums for the Treasury, which will which is why these measures have been swooped on," says Streeter.

In all, the new measures mean investors who hold money in funds or shares outside a pension or an ISA will face a greater tax burden.

"This rise is a stark reminder of the value of ISAs in protecting investors from having to consider CGT or dividend tax, so anyone who hasn’t exploited their ISA allowance to protect these investments may be inspired to do so," says Streeter.

For small company director-owners and buy-to-let investors who own property as part of a limited company, these changes could be a triple whammy, coming on top of rises in corporation tax, warns Streeter.

Hargreaves Lansdown says property investors could be faced with a hefty bill in just one hit now that CGT has been aligned with interest rates and they sell up, they

"This could discourage them from selling, causing parts of the housing market to potentially seize up. With house prices already facing a significant correction, if even more potential sellers try and avoid selling at what they perceive as a loss, fresh paralysis will add further uncertainty to a highly sensitive market," says Streeter.