A zombie company is loosely defined as an indebted businesses that, although generating cash, after covering running costs, fixed costs (wages, rates, rent) only has enough funds to service the interest on their loans, but not the debt itself.

Such companies generally depend on creditors for their continued existence, effectively putting them on a never-ending life support that ultimately contributes little to the vibrancy of the economy.

New research shows the covid-19 economic crisis has produced a swathe of new companies that are only able to service their debt obligations, particularly because the loans and funding made available by central banks and governments is not necessarily targeted in an efficient manner.

Findings from Bank of America Securities suggest the UK is particularly burdened by a new generation of zombies.

"Commensurate with the magnitude of the COVID shock, we find a record jump in "zombie" companies lately (corporates with interest coverage below 1x). The rise has been broad based - being felt across core and peripheral issuers. And there remains a conspicuous level of UK "zombies", a trend that was clear last year as Brexit began to bite," says Barnaby Martin, a Credit Strategist at Bank of America Securities.

The economic argument against zombie companies is that they hog too much market share and drain resources from the economy, thereby depriving more robust and dynamic firms of the resources they would require to expand.

Bank of America think there is a particular urgency for policy makers to address the growth in zombie companies sparked by the covid-10 crisis with innovative ideas, especially as the ability to "refinance" away the problem is a lot tougher now. 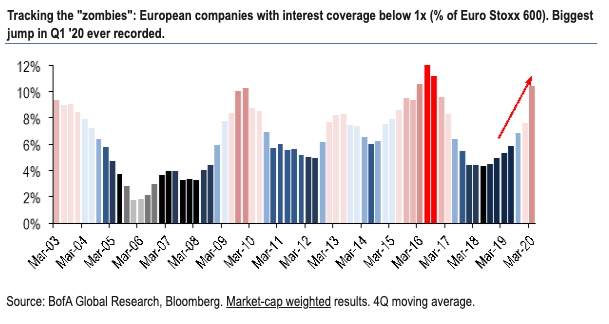 According to research conducted by audit firm KPMG in 2019 - before the onset of the covid crisis - 8% of UK firms were displaying "zombie-like symptoms". However, they said this could be an underrepresentation and the proportion of such companies across the UK could be as high as 14%.

The highest concentrations of zombie firms were in the energy, automotive and utilities sectors.

The covid-19 crisis has arguably sped up the evolution of the economy, fast-forwarding the demise of old industries by triggering new consumer trends and habits. One clear example is retail where ONS data showed the share of online retailers triggered fresh records during April and May which will likely come at the expense of the high-street's retailers.

"We shouldn’t bail out firms – like old-line retailers – that were already in decline before the crisis; to do so would merely create 'zombies,' ultimately limiting dynamism and growth," says world-renowned economist Joseph E. Stiglitz in a recent piece for Project Syndicate. 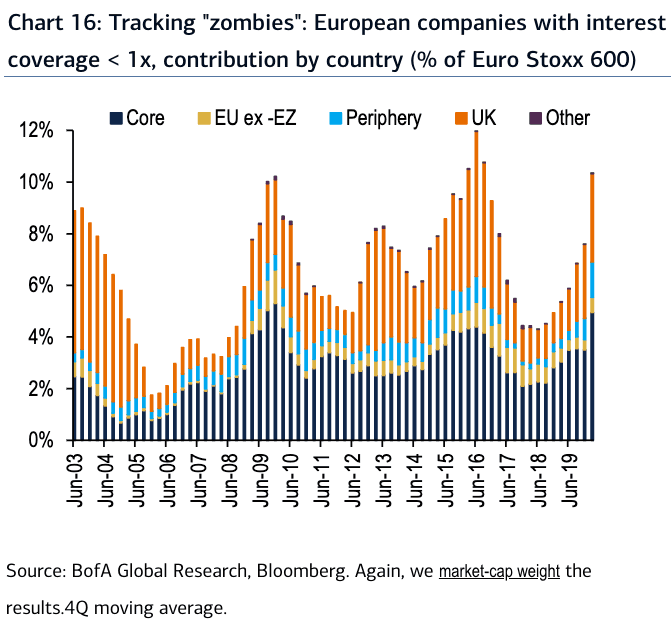 In terms of solutions to a potential zombie apocalypse, Bank of America says in the past central banks could simply lower the yield paid on debt by companies by lowering base interest rates and engaging in quantitative easing.

However, owing to the aggressive rate cuts and money printing conducted in 2020, they are running out of road and simply no longer offer an easy way out.

"This puts extra urgency on proactive fiscal policy by governments to help reduce corporate leverage in this crisis," says Martin.

Of interest to Bank of America is the EU's proposed Next Generation EU fund which is a proposed €750BN package aimed at helping EU countries and companies win the economic recovery.

The Solvency Support Instrument included in the package will channel guarantees from the EU budget in support of viable European companies that suffer from solvency issues due to the coronavirus crisis.

Importantly decisions on which companies to invest in will be made independently by the European Fund for Strategic Investments, meaning that they can identify where resources would be best allocated.

In total, €300bn of capital could potentially be made available based on €31bn of new money.

"Will €300bn do the trick? We estimate that the average net debt/equity ratio of European IG non-financials - with 2x or greater leverage - would fall from 2.2x to 1.2x if this equity was injected. In other words, €300bn could be a powerful sum of money, if deployed by the EU and in a timely fashion," says Martin.

What about the UK? Bank of America says the Bank of England's decision to utilise private equity funds to recap challenged UK companies could offer a similar targeted approach.

However, there are fears that once the crisis passes and the easy credit starts to dry up, companies that stocked up on finance will start to struggle to repay and ultimately be forced to liquidate. However, the loss of zombies might not be a bad thing, even if it entails some short-term pains.