A detailed study of international bank transfer costs by MoneyMover and Accourt - a consultancy service to the payments industry - reveals the true cost of using the UK's main high-street banks to transfer money internationally.

While most banks charge a flat fee to transfer money, it appears that the lion's share of profit on the transaction is in fact derived from the spread between the exchange rate you receive and the exchange rate they actually purchased the currency at.

In short, they buy the currency they sell on to you at a different rate in order to derive profit.

Crucially, the rate they choose to offer their clients is completely discretionary ensuring it could be in the best interest for those looking to make a money transfer to shop around for the best rates.

“In general terms UK banks lack transparency on currency exchange rates and margins. Each bank generates its own FX rate for the day and it is provided by an internal system which customers do not have access to. In some instances the bank’s exchange rate is not even provided before confirming the payment so it is unknown to the customer how much is going to be charged for the transaction,” noted Accourt.

Accourt conducted research into the top six UK banks with the aim of extracting the true cost of making international payments by adding the fee to the amount they earned from the profit made on the exchange rate they received and the exchange rate they offered. The results were published in Accourt's second annual Currency Risk Outlook 2015 report. 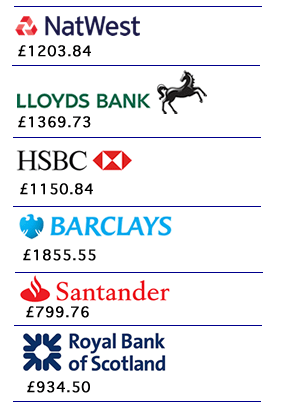 The above is summary of the costs of one set of findings on a transfer of £50000, studies were also conducted on transfer amounts for £10K and £100K.