Forecasts show the euro exchange rate complex (EUR) is heavily oversold and due a corrective move higher - but this has not stopped the GBPEUR climbing above the 1.40 zone to record its 2015 best.

Those using pound sterling to buy euros will be doing so at the best exchange rate levels of 2015. Indeed, retail currency markets are offering their best levels since 2007.

The wholesale inter-bank rate has broken above the 1.40 level, however as we can see some banks are offering well below this threshold at 1.34.

Specialist providers are delivering the retail GBPEUR exchange rate at much more generous levels in the late 1.39’s.

"The ECB is a mere 24 hours into its QE program that is expected to last until deep into next year and flood area financial markets with an enormous amount of euro in excess of €1 trillion," says analyst Joe Manimbo at Western Union regarding recent market action..

Manimbo says the euro is seen on a faster track to a fall to parity against the USD, something that until recently was considered an agenda item for 2016 or later.

While trend and momentum indicators continue to advocate for more upside we are aware that the pound sterling is overbought against the euro in all timeframes.

Determining whether an instrument is overbought is done so via observing the Relative Strength Index (RSI) on the charts.

A reading above 70 indicates overbought conditions; the RSI on the weekly GBP/EUR chart is at 83.7 at the time of writing – a level that screams for the need for corrective falls and consolidation.

However, as Bill McNamara, analyst at Charles Stanley notes in a briefing to clients, there is little to suggest an imminent correction lower is due:

“The relative weakness of the euro (ahead of the start of the ECB’s QE program) continues and this means that sterling has risen to seven-year highs relative to the single currency – great for holidaymakers heading to the Continent, less so for exporters to the euro-zone.

“As you would expect this leaves the pound looking pretty overbought – its 14-week RSI is now at a multi-year high of 81.4% - but there is still little in the chart to suggest that a reversal is imminent (at least, not one of significant proportions).”

The surge in sterling against the single currency comes as the latter receives a notable downgrade from industry-leading forex analysts at Deutsche Bank.

Deutsche have indicated to clients that a collapse in the euro is well underway lead by a large-scale capital flight from Europe.

Driving the movement of capital are negative interest rates at the ECB and the introduction this month of quantitative easing and rates.

“The greater the European outflows, the more the euro can weaken and the lower global bond yields can stay,” says George Saravelos at Deutsche Bank.

And, there is a great deal of currency left to flow out of the Eurozone, to the tune of 1 Trillion euro suggest analysts.

What is interesting for GBP to EUR is that the UK is one of the favoured destination for Eurozone capital, hence the rocketing of the exchange rate:

“Portfolio outflows from the euro area have been searching for yield overseas. Relative to the allocation of the EMU’s total stock of foreign portfolio assets, recent flows have disproportionately favoured assets in the US, the UK, and Canada (see below).” 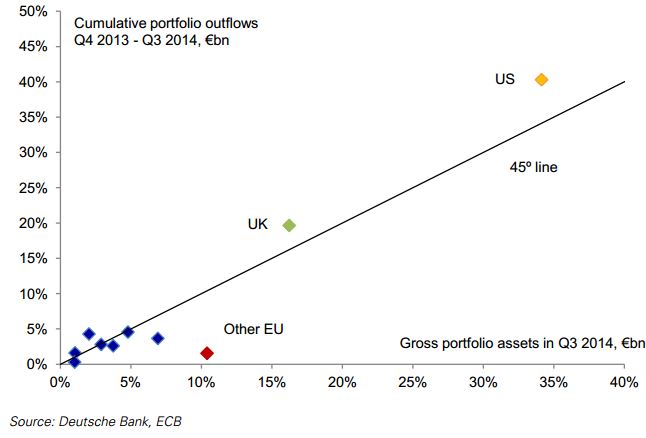 “The current pace of capital outflows is even larger than our expectations from last year. Combined with our estimates above we revise our EUR/USD forecasts lower. We now see EUR/USD moving down to 1.00 by year-end, 90cents by 2016 and down to a trough of 85cents by 2017,” says Saravelos.

No forecasts for the sterling have been issued in the note, but the aggressive move lower in the euro dollar will almost certainly be tracked by euro pound.

Why is the British Pound Higher?

The expectations for interest rate increases in the United States and United Kingdom in 2015 are attracting large amounts of investor capital – a scenario that will continue to underpin the USD and GBP.

Underpinning a bias to raise interest rates is data; and we got some fresh strong readings out of the economy at the start of the second week of March.

UK BRC retail sales data may have come in shy of median expectations on a y-o-y like-for-like basis, “but we would rather focus upon the fact that the total y-o-y sales advanced to the highest level since November at 1.7%,” notes Jeremy Stretch at CIBC.

This represents he highest annual reading since the Black Friday inspired blowout and in Stretch’s opinion should maintain the presumption that UK consumer activity remains in excess of trend levels.

Ahead of the industrial output data due tomorrow, we have plenty of potential BoE rhetoric including from MPC hawk McCafferty.

“Any reference to suggest that the recent rolling back in rate hike votes was temporary should maintain GBP support on the crosses,” says Stretch.