The pound to euro exchange rate (GBPEUR) has hit its best levels since 2007 as a combination of ECB quantitative easing and strong US data force the shared currency lower.

"What did proceed as expected was the demise of the euro; the currency hit even fresher 11 year lows during Draghi’s conference, and can expect to lose more once the bond buying begins next week,” - Connor Campbell, analyst at Spreadex.

Those looking for stronger levels to buy euros with the British pound are seeing the best levels to convert in 8 years while those holding dollars are seeing an 11 year best.

The euro has had a tough week and hit new lows on the back of further details about the European Central Bank (ECB)’s quantitative easing programme. This helped to buoy sterling and boost a strong US dollar further.

The move higher in GBPEUR on Thursday came after it was confirmed that 60BN euro’s would be pumped into the Eurozone economy every month until September 2016.

A fresh move higher then took place on the final day of the week when it was announced US economy added 295,000 new jobs in February, above the 240,000 expected by analysts.

This saw demand for the USD rocket and the euro exchange rate complex was the main recipient of losses.

Upside momentum is well and truly behind the sterling euro rate and betting against further gains would not be recommended.

It would not be recommended unless you take a look at the Relative Strength Index (RSI) reading on the weekly charts.

The RSI gives a good indicator of momentum, and importantly, whether a move has over-extended itself.

The RSI on the pound euro rate is at 80 and is screaming overbought (see the lower line on the graph below).

However, with the ECB kicking off its 60BN euro a month easing programme we could interpret the RSI reading as being indicative of nothing more than a well-established trend. 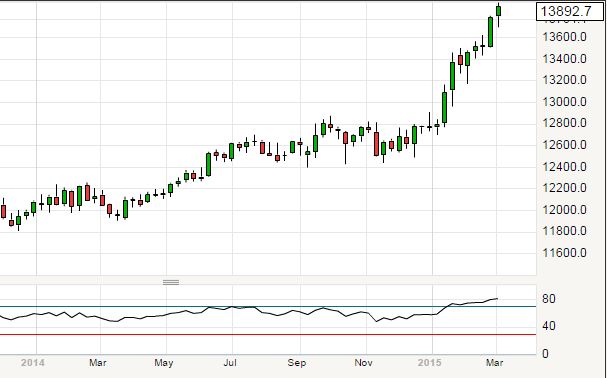 The Euro Sell-Off: It was Something Draghi Said

The euro exchange rate complex suffered as the markets ignored significant upgrades to GDP forecasts at the ECB.

"But today’s kicker was Draghi clarifying in the Q&A that the ECB can buy bonds as long as the yield is higher than the deposit rate, currently –0.20%, which forced markets to reverse course and supports our belief that the nature of the flows behind ECB QE will prove a strong anchor to rates and EURUSD," says Richard Kelly at TD Securities on the one aspect of the day markets latched on to.

Inflation Adds to the Downside Pressures

In addition, the talk of inflation being lower for longer got traders selling the euro against the pound sterling.

“It appears that the very existence of the ECB conference this afternoon did more for the markets than its content. What did proceed as expected was the demise of the euro; the currency hit even fresher 11 year lows during Draghi’s conference, and can expect to lose more once the bond buying begins next week,” says Connor Campbell, analyst at Spreadex.

It was talk of an inflation target that triggered the heavy selling.

Joseph Weisenthal at Bloomberg says the utterance from ECB President Mario Draghi that the ECB will buy assets, “in any case until we see a sustained adjustment in the path of inflation.

The ECB is targeting inflation at 2%, latest inflation data from the Eurozone read at -0/3% suggesting the end-game in the ECB’s purchase progress is a long way off.

ECB forecasts released at at the March meeting show inflation is expected to remain very low or negative in the coming months, a major rub for those hoping for a higher shared currency.

Inflationary pressures are expected to start increasing gradually later this year as a result of slightly higher oil prices, the delayed impact of the weaker euro and of monetary policy measures.

If the inflation level is still below the target level of 2% in 2017 markets believe the ECB will pump yet more money into the economy beyond the September 2016 cut-off date.

“Any expect the programme to continue well past the September 2016 date set out by Draghi and there are conflicting views as to whether it will have much of an impact at all. Draghi clearly had to take action, but it will be some time before it’s clear if QE has had the desired effect,” says Dennis de Jong, managing director at UFX.com.