The euro dollar exchange rate (EURUSD) has been pushed sharply lower amidst a tsunami of dollar buying.

The euro has had a tough week and hit new lows on the back of further details concerning the European Central Bank (ECB) quantitative easing programme. This helped to buoy sterling and boost a strong US dollar.

Further steep declines below the 1.10 level occured in the wake of the release of better-than-expected jobs data out of the US on the final day of the week.

The details of the March ECB event combined with confirmation of a strong US economy has convinced a number of analysts to stick by their forecasts for euro-dollar to trade through to 1:1 by the end of the year.

Indeed, the declines are happening at such a pace that the target of parity could be achieved before year-end. Of course we expect oversold conditions to eventually come to the shared currency's rescue, but in this environment there is little to be seen that will favour those brave euro buyers.

What is Being Said

Some snapshots from those in the market:

As we can see the support level of 1.10 proved solid initially but as markets walked in on Friday the selling continued as there is an overwhelming bias against the shared currency at the present time.: 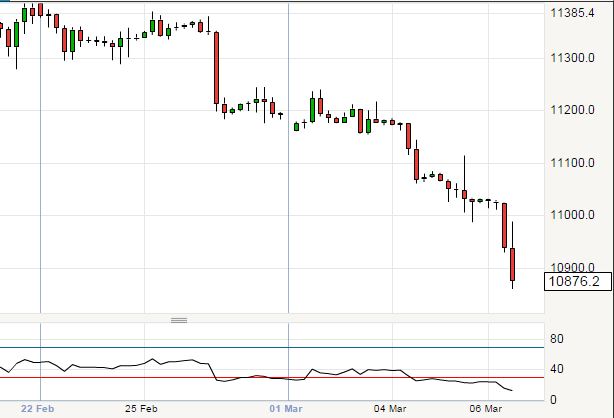 Above: Downside in EURUSD is yet to find support

"In the long run, a stronger Europe will be attained by a weaker euro but in the meantime, a move down to the September 2003 low of 1.0765 is likely with a possible drift towards 1.05 if that level is broken," says Kathy Lien at BK Asset Management in a note concerning the near-term outlook for the euro exchange rate.

Commenting on the positive USD environment is Enrique Diaz at brokerage Ebury:

“This is quite a day for Dollar bulls. These latest figures have more than surpassed the markets’ expectations, sending the Dollar soaring by around 1% against the Euro. This is good news for Eurozone exporters.

"As for the currency impact, with the ECB introducing further QE this week, it may now be difficult for the Euro to bounce back from its recent slide. More fundamentally, this may well be the green light that the Fed have been waiting for on interest rates. We should see a hike as soon as June this year, and the overnight rate should end the year at around the 1% level.”

Yield v Deposit Rate: The Kicker of the ECB Conference

The ECB confirmed 60BN EUR will be pushed into the Eurozone economy every month until at least September 2016 and the purchases begin on the 9th of March.

"But today’s kicker was Draghi clarifying in the Q&A that the ECB can buy bonds as long as the yield is higher than the deposit rate, currently –0.20%, which forced markets to reverse course and supports our belief that the nature of the flows behind ECB QE will prove a strong anchor to rates and EURUSD," says Richard Kelly at TD Securities.

As such, TD Securities are sticking by their belief that further falls are to come in the exchange rate.

"We remain very comfortable with our forecast for EURUSD to trade through parity for year-end and for the German curve to remain nailed to the floor and peripheral spreads to tighten even as the Fed starts to tighten," says Kelly.

ECB President Mario Draghi that the ECB will buy assets, “in any case until we see a sustained adjustment in the path of inflation," was key.

The ECB is targeting inflation at 2%, latest inflation data from the Eurozone read at -0/3% suggesting the end-game in the ECB’s purchase progress is a long way off.

“Many expect the programme to continue well past the September 2016 date set out by Draghi and there are conflicting views as to whether it will have much of an impact at all. Draghi clearly had to take action, but it will be some time before it’s clear if QE has had the desired effect,” says Dennis de Jong, managing director at UFX.com.

If signs continue to emerge that there is little appetite to cap the bond-buying programme at the ECB we could well see the euro exchange rate complex continue its decline towards and below the 1.00 parity zone against the dollar.

"The congested 1.10 area proved firm enough to hold today but between the strong flow of buying from the ECB, investors globally rotating out of euro-denominated assets, and the impending Fed hike we expect to being in September, the fundamentals argue firmly for euro to move lower this year," says Kelly.