When will the pound sterling see its present negative run against the Australian dollar (AUD) come to an end?

“We believe AUD could unwind some of its recent gains over coming weeks." - Hans Redeker at Morgan Stanley.

The British pound (GBP) is easily on course to suffer its third consecutive week of declines against the Aus dollar.

The 1 GBP = 2 AUD level is proving to be a tough barrier to crack for those waiting for a better rate at which to buy their Australian currency.

Nevertheless, a new analysis confirms the AUD remains susceptible to suffering further losses over the course of 2015. Patience is required.

There are two analytical methods from which to view the path ahead - the technical and the fundamental.

The pound could only start its longer-term uptrend against the Aussie in May according to a technical study of the GBPAUD charts.

As we can see below the GBPAUD is trending higher within a well defined upward channel: 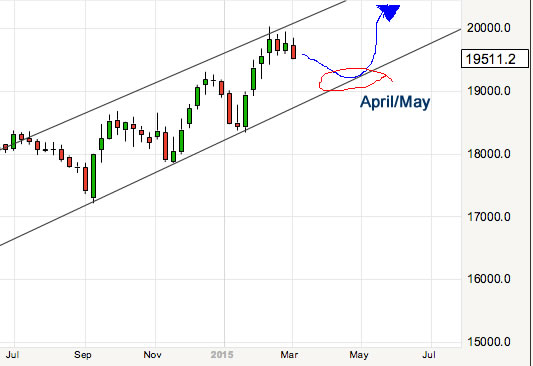 If we take momentum as an indicator of the path of least resistance then the obvious path for the remainder of 2015 appears to be higher.

But, as recent patterns show the GBPAUD is prone to bouts of weakness which can extend for weeks - a logical approach suggests we could see the potential for sterling losses to extend until May before the next leg up in the rally begins.

Of course, the technical picture could well be torpedoed by event risks stemming from the Reserve Bank of Australia and economic data releases.

While calling the future is impossible we do have a good idea of what the general landscape for the Australian and British currencies looks like.

The British pound is currently seeing foreign exchange market strength owing to market expectations that the Bank of England will raise interest rates in 2015/2016.

Latest data releases suggest the economy is now robust enough to absorb the first rate hike - an undoubted positive for the GBP in the medium-term.

Where the Bank of England’s next move is likely to be a rate hike, the Reserve Bank of Australia is seen heading in the opposite direction having cut rates in February. More cuts are expected.

Forecasts that have just arrived on our desk from Morgan Stanley have seen the investment bank retain their negative stance on the Australian dollar.

Hans Redeker at Morgan Stanley says the next bout of Aussie dollar strength could come soon:

“We believe AUD could unwind some of its recent gains over coming weeks. The latest capex data were weaker than the already downbeat market expectations.

“While the RBA may not cut at the coming meeting, with growth soft and investment in the commodity sector likely to decline, we expect that this would be a delay in further easing rather than an end of the easing cycle. We remain bearish on AUD.”

Morgan Stanley have maintained a long-standing negative view on AUD as the combination of a deeper-than-expected terms of trade shock, rich valuations, a stalling domestic economic transition, and a dovish central bank put pressure on the currency.

“Given its large net external liability position, AUD is also vulnerable to a spike in US Treasury front-end yields,” says Redeker.

Morgan Stanley have reduced their AUD/USD year-end forecast further to 0.69 as their economists projected two additional rate cuts from the RBA by May, taking the cash rate to 1.75%.

Be under no doubt - a decline in AUD/USD will provide a supportive wind forward for GBP/AUD.