Fresh exchange rate forecasts from Morgan Stanley show the US dollar should push the GBPUSD currency pair below 1.40 by the end of 2015.

"Against the USD we become more cautious over the medium term given growing political risks that could reduce FDI inflows." - Hans Redeker at Morgan Stanley.

In their latest note to clients Morgan Stanley warn continued demand for the USD will prove hard to resist for global currencies.

The GBP will not escape these pressures despite signs that it has formed a base over recent weeks.

Indeed the race lower appears to be well under way once more; at the time of writing we are seeing the pound to dollar exchange rate (GBP-USD) trading at 1.5234.

NB: The above quotes and graphic representations below are taken off the wholesale markets. Your bank will affix a spread at their discretion when passing on currency. However, an independent FX provider will seek to undercut your bank's offer, thereby delivering up to 5% more currency in some instances. Find out more.

The outlook for the pound sterling is held to be neutral at Morgan Stanley.

We say neutral because there are no shortage of currencies that are set to lose ground against the UK unit in 2015 and 2016.

However, the US dollar is widely tipped to rise, and even the GBP may not be able to withstand this force.

“Over the coming week GBP may continue to receive some support driven by relative rate differentials say with Sweden or the Euro area, bringing GBP strength on the crosses.

“In addition, gilt inflows from regions that are experiencing low bond yield levels could provide support for GBP.

“Against the USD we become more cautious over the medium term given growing political risks that could reduce FDI inflows. We like selling EURGBP and buying GBPSEK and will watch Services PMI this week.”

Hans Redeker at Morgan Stanley lays out the case for the USD.

Essentially, the ‘stronger dollar’ owes itself to the prospect of higher US interest rates and bond yields in coming months: 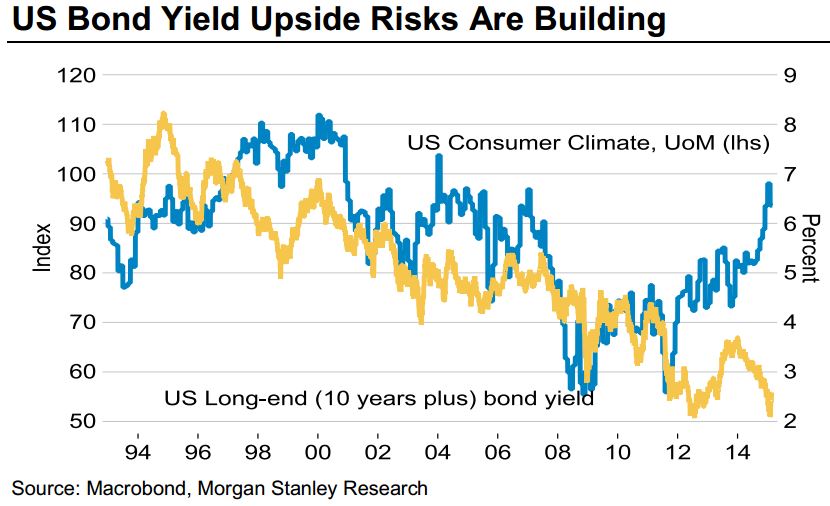 Below is a fan chart of potential GBP-USD direction for the remainder of 2015 and into 2016. 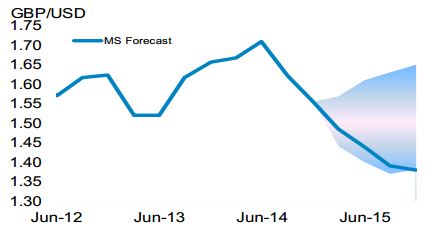 Click on the below to enlarge the latest table showing Morgan Stanley's predictions for global currencies.