Britain's construction sector is hinting that the economy can handle a GBP-positive interest rate hike at the Bank of England in 2015.

“Capacity shortages among suppliers and strong demand for construction materials also contributed to a marked upturn in input price inflation since January” – Markit and CIPS.

The (PMI) registered at 60.1 in February, up from 59.1 in January and above the neutral 50.0 threshold for the twenty-second successive month. Currency markets had been geared for a fall to 59 which explains the gains we have seen in the GBP.

At this article's last update the pound euro exchange rate (GBPEUR) is seen trading 0.35 pct higher on a day-on-day comparison, the conversion rate is at 1.3793.

Elsewhere, the pound to Australian dollar exchange rate (GBPAUD) is suffering as the RBA opts to keep interest rates on hold in March.

Spare Capacity in Construction Tightens – But Will the Bank of England Notice?

The Bank of England often uses the term ‘spare capacity’ to ascertain whether the economy is ready for interest rate hikes to be unleashed.

What the latest PMI data from Markit shows is that the construction sector is close to running at full capacity.

“February data pointed to worsening supply-chain pressures across the UK construction sector, as highlighted by vendor delivery times lengthening to the greatest degree since October 2014. Capacity shortages among suppliers and strong demand for construction materials also contributed to a marked upturn in input price inflation since January,” say Markit.

Will the Bank of England take note? Or will further excuses for keeping interest rates at record lows for longer be made in coming months.

For the British pound any excuses for keeping the status quo will be a negative while the currency will rally further should the Bank acknowledge the economy is starting to generate its own inflationary pressures and rate rises are needed. 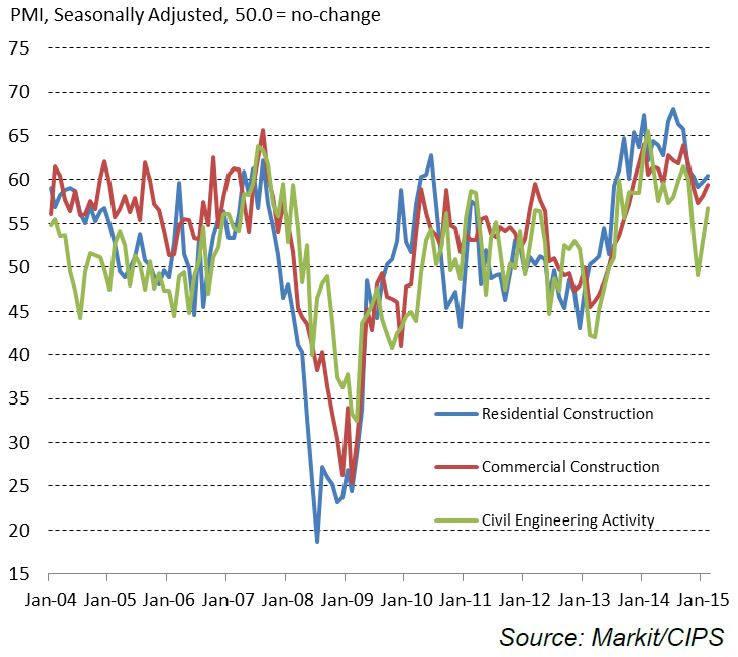 Another favourite benchmark used by the Bank of England when judging spare capacity is wage growth.

“Although still robust, the rate of employment growth moderated to its least marked since December 2013,” say Markit.

Is employment growth slowing because of waning activity or is the industry now faced with a skills shortage and wage inflation?

The following findings of the PMI survey give us the answer:

“Sub-contractor usage rose at an accelerated pace in February, which led to another steep reduction in the availability of sub-contractors.

“Strong demand for sub-contractors in turn helped push up average rates charged by sub-contractors, with the latest increase the fastest since the survey began almost 18 years ago.”

Construction firms appear to be finding it difficult to organically grow their own workforce, as such they look to outsource those skills.

Both tell us this particular sector of the economy is ready for a GBP-positive interest rate hike.