While we have seen relief buying of the euro at start of the new trading month, the outlook remains resolutely negative in the long-term timeframes.

Studies contained in this report give readers an idea of the levels that could be achieved by the British pound and US dollar against the euro in coming days and weeks.

Where is the EUR Now?

On Wednesday we note gains made at the start of the week are being given away. For reference, the euro to pound sterling exchange rate (EURGBP) is at 0.7245 - 0.35% down on the previous day's closing level.

NB: The above quotes and graphic representations are taken off the wholesale markets. Your bank will affix a spread at their discretion when passing on currency. However, an independent FX provider will seek to undercut your bank's offer, thereby delivering up to 5% more currency in some instances. Find out more.

Deflation Props up Single Currency at Start of March

Eurozone inflation rebounded in February with the annual cost of living standing at -0.3%, up from -0.6% in January, the EU statistics agency Eurostat said in preliminary data.

Markets had expected a reading of -0.5%; the positive surprise got the shared currency off to a strong start.

Any upside surprises in Eurozone data will have notable impacts on the EUR owing to the massive amount of negative bets currently placed against the currency.

Contrast this to the pound sterling which hardly moved in response to March’s positive Manufacturing data. It will take blow-out positive data surprises to shift the GBP precisely because the market is so massively aligned behind the currency.

“Mario Draghi would have had his fingers crossed before the consumer price index figures were released this morning, and though the results were better than expected, the outlook for Europe is still precarious.

“At least Draghi isn’t alone in fighting deflation. Of the 28 countries in the EU, 23 are officially in deflation and the UK looks likely to make it 24 in a few weeks’ time. Having already embarked on a massive bond buying programme, and with interest rates already at historic lows in many member countries, it’s difficult to see how Draghi and Co. will be able to escape deflation anytime soon.”

Forecasting the Downtrend to Continue

Looking through the data, what can we expect from the euro exchange rate complex?

Barclays tell us any strength shown by the EUR will ultimately be fleeting:

“We do not expect the ECB to make any monetary policy changes at its March meeting (Thursday), given the recently announced expansion of its asset purchase program.

“Any subsequent EUR appreciation is unlikely to be sustained, particularly given the recent re-emergence of pronounced USD strength following January’s firm US core CPI inflation reading.”

The Technical Levels That Will Determine the Outlook

Technical forecast for the euro to dollar exchange rate:

Giving us guidance on the euro dollar rate at the start of March is Lucy Lillicrap at currency brokerage AFEX: 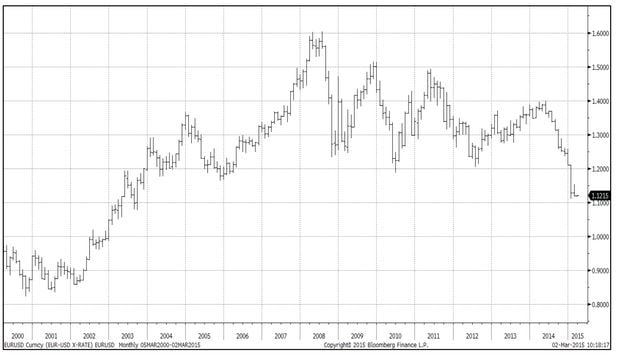 “Despite U.S. Dollar weakness elsewhere in the past few weeks values here failed to recover much beyond even 1.1500 and as a result previous cycle lows at 1.1100 are coming back into focus again already.

“Another failure ahead of 1.100 might still delay resumption of broad EUR negative trends but longer term studies argue downside risk remains readable toward at least 1.0750 and on this basis any such secondary rebound would be considered unsustainable.

“Fresh resistance now starts at 1.1300 with a push back above secondary 1.1450 resistance necessary as well to infer an interim floor has been seen. Otherwise expect 1.1100 to give way in due course as 1.0950 attracts next.”

Technical forecast for the euro to pound exchange rate:

Our analysis of the EUR to GBP is provided by Luc Luyet, analyst at Swissquote Bank: 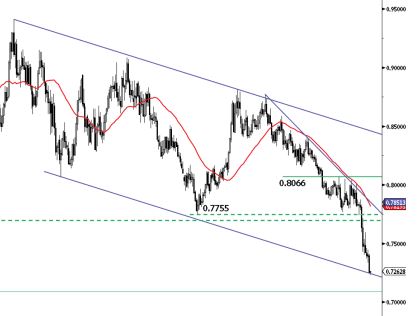