The euro exchange rate complex is widely tipped to continue its journey lower in coming months – but what are the realistic target points those with an eye on the world’s most important currency market place should be looking out for?

As we enter a new month the dollar is seen outperforming once more while the euro bears much of the pressure.

Bond markets are the driver.

“European bond yields nosedived, probably as investors anticipated on the start of ECB QE. At the same time, the dollar got, albeit limited, interest rate support as US inflation data were OK. The combination of both pushed EUR/USD off a cliff,” summarises Piet Lammens at KBC Markets in a note to clients at the close of February. 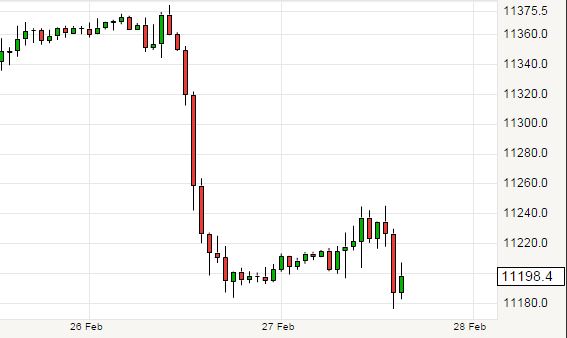 Be aware: The above quotes and graphic representations are taken off the wholesale markets. Your bank will affix a spread at their discretion when passing on currency. However, an independent FX provider will seek to undercut your bank's offer, thereby delivering up to 5% more currency in some instances. Find out more.

Forecasting a Test of Parity in Euro Dollar

As the graphics on this page attest, the euro strengthened over the course of recent weeks with a base formation occurring against the dollar.

Those betting on a break to the upside will have been disappointed as the return of volatility confirms the longer-term downtrend looks intent on re-asserting itself.

What are the target levels to look out for?

Luc Luyet at Swissquote Bank has looked at recent action in the euro dollar and tells us:

“EURUSD has broken to the downside out of the range defined by the support at 1.1262 and the resistance at 1.1450. 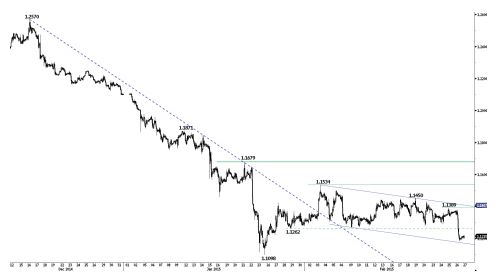 “In the longer term, the symmetrical triangle favours further weakness towards parity. As a result, any strength is likely to be temporary in nature.

Piet Lammens at KBC Markets has his eye on nearer-term targets and suggests the pace of decline will not necessarily be as fast as many are hoping:

“We still assume a sustained break will be difficult. On the downside, first important support at 1.1262/24 was broken yesterday. This brings the 1.1098 (correction low) on the radar. For a sustained break of these levels, a substantial rise in US bond yields is probably needed.”

Karen Jones at Commerzbank tells us she is forecasting levels below 1.10 in the mid-term:

“EUR/USD has eroded the 1.1262 29th January low. This is negative price action and leaves attention on the 1.1098 recent low. The market is directly offered below the near term resistance line at 1.1408.

“The Elliott wave count on the daily chart is pointing to a potential 1.1703/86 correction (double Fibonacci retracement) and even potentially 1.2085, but intraday counts are more negative.

“They are suggesting the resumption of the downmove.”