The outlook for the British pound to dollar exchange rate (GBP-USD) remains positive say a number of analysts who have just released their latest research on the pair.

However, the calls were issued ahead of a strong USD rally on the back of what appears to be stubborn US inflation data.

While the USD is looking stronger at the present time the recent sterling recovery, discussed here, remains relevant until key technical levels are broken down.

“The Cable has begun to turn bullish in recent weeks and the formation of a bullish channel could provide traders a technical setup to take advantage of it,” says Ross Woodfield at Blackwell Global Investments.

The fundamentals remain supportive - the prospect of a cut in UK interest rates is very unlikely at this stage. Furthermore the Bank of England has remained committed to raising interest rates by early next year.

Meanwhile, we are seeing signs that the US Federal Reserve could be agitating for a push back in timing for their own interest rate hike.

"Despite Fed Chair Yellens best efforts this week to dampen down the markets enthusiasm around dropping “patience” and normalising rates policy, the market was having non of it. Most had inked into their minds a poor inflation print and  wanted to resell rates and buy the USD at better levels," say Lloyds Bank in a note explaining the volatility seen in dollar pound over the past 24 hours.

Where is the Rate Now?

NOTE: The above quotes and graphic representations are taken off the wholesale markets. Your bank will affix a spread at their discretion when passing on currency. However, an independent FX provider will seek to undercut your bank's offer, thereby delivering up to 5% more currency in some instances. Find out more.

As we can see from the below graphics, the GBPUSD found the 1.50 level supportive, something we had always been of the opinion would transpire.

Since then, a channel higher has formed: 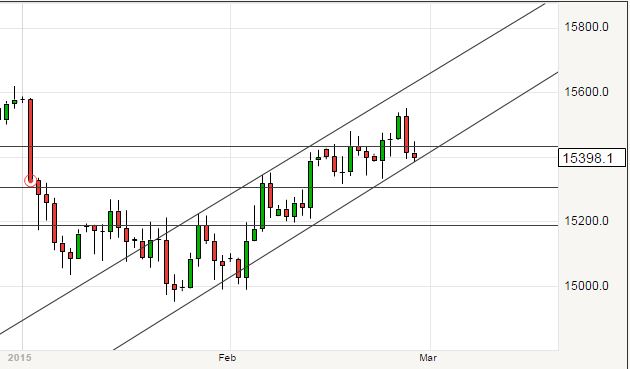 “A less risky trade would be to wait for a touch along the bottom of the channel and enter on the rejection.

What the Forecasters are Saying

With an apparent upward trend in place, what are the other levels we should be keeping an eye on in the sterling-dollar rate?

Karen Jones at Commerzbank tells us resistance to the recovery remains a little further ahead:

“GBP/USD has eroded the 23.6% retracement of the move down from July 2014 and the top of the daily cloud – the market has not traded above its cloud since July 2014.

“This suggests some unfinished business on the topside.

Lucy Luyet at Swissquote Research tells us where the various supportive levels to the trend lie:

Janet Yellen provided no fresh insight on U.S. monetary policy in day 2 of her testimony on Capitol Hill.

“As a result, the U.S. dollar continued to trade lower against all of the major currencies,” notes Kathy Lien at BK Asset Management.

A smaller decline in new home sales did not help the dollar although it is notable that the greenback has held up well against the Japanese Yen compared to other major currencies.

The biggest loses were seen against the commodity currencies which benefitted from higher oil prices and stronger data from China.

Yellen opted for flexibility over clarity but she also made it clear that rates could rise at any time.

“The recent pullback in the dollar indicates that investors had hoped for more from Yellen but a June rate hike was never realistic. The central bank doesn't want to raise interest rates too quickly because they fear that a premature increase would undermine the recovery and hamper job healing,” says Lien.