The relentless selling of the euro is predicted to finally ease after a 5-figure dive seen in mid-January following the announcement of a massive ECB stimulus package.

The EUR/GBP and EUR/USDpairs were looking extremely oversold from a technical perspective laying the ground for the corrective rally we are witnessing at the present time.

Despite the new-found relief, forecasts confirm the pound sterling (GBP) is likely to retain a positive trajectory against its Eurozone counterpart in coming weeks and months. 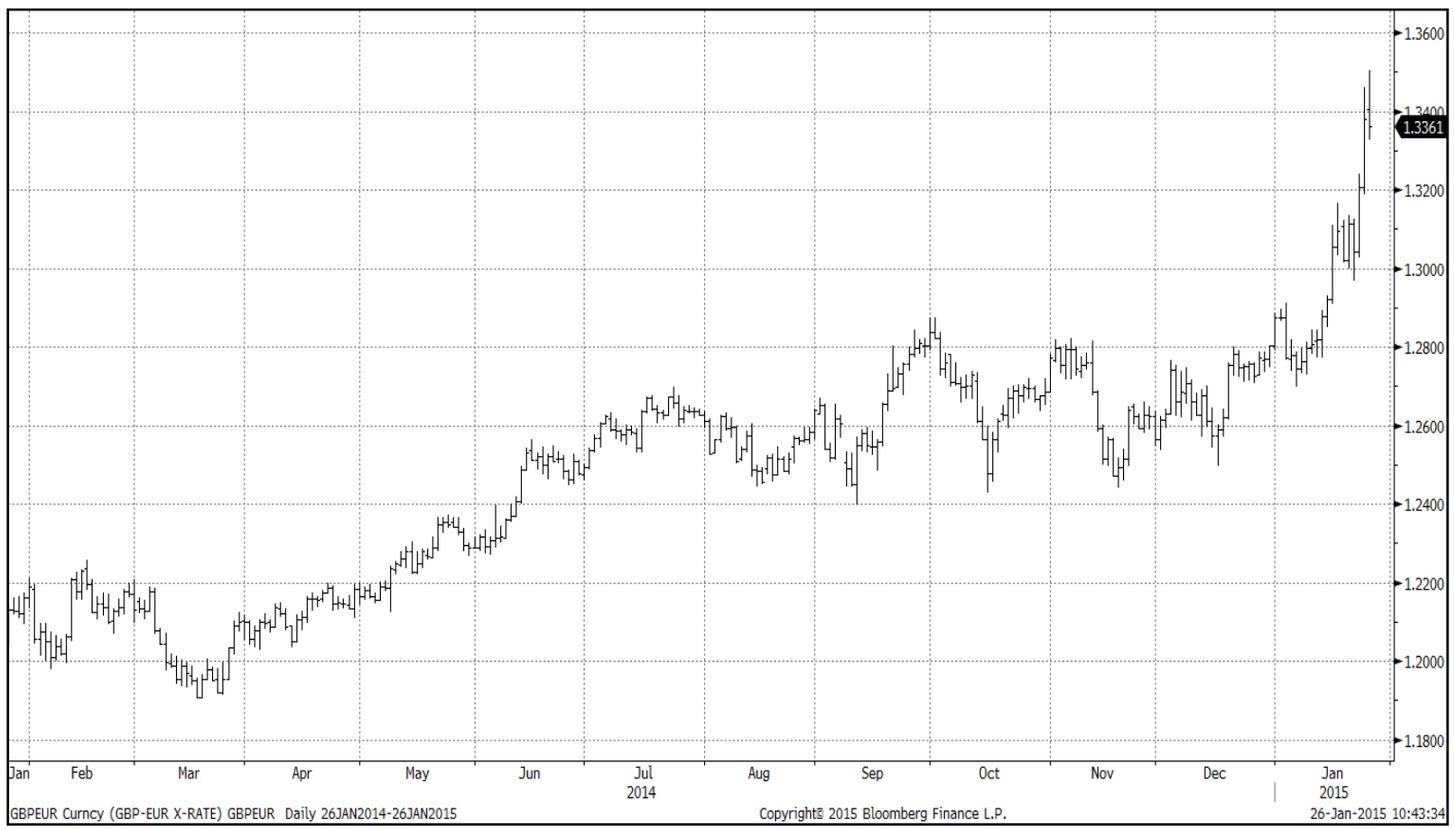 Giving her latest currency predictions is FX risk management specialist Lucy Lillicrap at AFEX who sees the potential for a climb towards 1.35 now being possible:

"With market focus still centred on the Euro key resistance around 1.3000 finally gave way in recent days and a major basing structure has accordingly been put in place.
"This should both limit downside risk going forward and also enable further sizeable Sterling gains with enough compression evident to target 1.4000+ levels as well during the balance of 2015.

"Interim potential exists toward 1.3500 but whilst a temporary high could then form emergent GBP weakness is likely to prove corrective only.

"Dips now have good support either side of 1.3000 and unless the distant 1.2850 level gives way no significant top, i.e. reversal, will be indicated. Otherwise studies imply emergent weakness has localised support at 1.3125 and pull-backs are otherwise expected to remain short-lived."

Sterling surged on the January ECB policy announcement and, "is currently on a tear (and back to levels last seen almost seven years ago). This strength leaves the UK currency looking somewhat overbought but there is still little in the way of compelling technical evidence that this move is about to come to an end," says Bill McNamara, analyst at Charles Stanley.

The euro currency complex has been hit hard by the announcement that over a trillion euros worth of currency will be injected into the Eurozone by September 2016.

Athanasios Vamvakidis at Bank of America Merrill Lynch says he continues to see the pound outperforming the euro:

"We expect a relatively stable EUR/GBP rate in 1H15 despite the onset of ECB QE, before giving way to renewed downside in the second half of the year in line with broader based EUR weakness.

"The continued divergence between the ECB and BoE should continue to keep EUR/GBP under pressure through our forecast horizon."

That said, there are risks to the pro-GBP stance:

"Sustainability of the record UK current account deficit remains a risk factor for GBP, particularly if the UK finds it increasingly difficult to fund the gap via the  capital account inflows.

"In line with the downward revisions to our EUR/USD forecasts, we have also made mark-to-market adjustments to our profile for EUR/GBP and GBP/USD.

"The adjustment in EUR/GBP is thus a reflection of the ECB decision to implement QE and its impact on EUR. The 1H15 environment for GBP is likely to be a challenging one as growth momentum continues to slow and inflation stays well below target."

Upgrading Growth Forcasts for the Eurozone

Longer-term, downside in the euro will be halted by an improving Eurozone economy, provided governments step forward and aid the ECB by implementing much-needed structural reforms.

The ECB announced 60BN euro's a week would be pushed into the EZ economy until September 2016 - something that will likely provide a tailwind to Eurozone economic growth.

"All in all, we think that the ECB has found a sweet spot this week, delivering credible monetary stimulus while nodding to the hawks’ concerns.

"Even if we have our doubts on the magnitude of the real effects of QE on economic growth, we consider that today they have created a tangible confidence effect. Our 1.2%
GDP growth forecast for 2015 published in December was already predicated on the advent of QE, but we think that the details of today’s announcement, together
with the further drop in oil prices and further euro depreciation, create a positive risk to our forecast."

BofA note the following positives are appearing and will likely intensify in the second half of the year:

i) consumer spending reacting to lower oil prices;
ii) net exports responding to lower currency, particularly given that the evolution of inventories and oil will keep imports in check; and
3) there is likely going to be a small confidence boost from higher than expected QE at the same time that the bank lending survey and lending flows are consistent with the (slow) normalisation we were expecting.

"All these tailwinds should facilitate the progressive improvement in GDP growth we currently forecast, from 0.2% QoQ at the end of 2014 to 0.4% QoQ in H2 2015, with important upside risks to those forecasts," say Bank of America.