The British pound is once more sitting above the 20.00 mark against the South African rand as China currency market intervention enters its second day.

The rand exchange rate complex is under pressure after China devalued its currency for the second day in a row.

Other Commodity currencies have also been hit with large losses, particularly the Australian dollar.

Yuan weakness is negative for commodity prices as it raises the yuan price for mainland consumers and makes foreign imports more expensive.

South Africa has a huge export exposure to China and there are concerns that China may be unable to afford SA product.

Furthermore, "global markets hate the uncertainty: equities and commodities have fallen; treasuries and other safe-haven plays such as gold have rallied. The rand naturally falls in the first camp and has dropped in line with the other risk currencies," says Cairns.

The pound to rand exchange rate (GBPZAR) trades back above the 20.00 zone, and judging by the USD/ZAR’s outlook further gains may come as this USD is currently setting the tone for GBP.

Sitting alongside the ZAR in this basket of currencies is the Canadian, Australian and New Zealand dollars, all of which are caught in protracted downtrends at the present time. 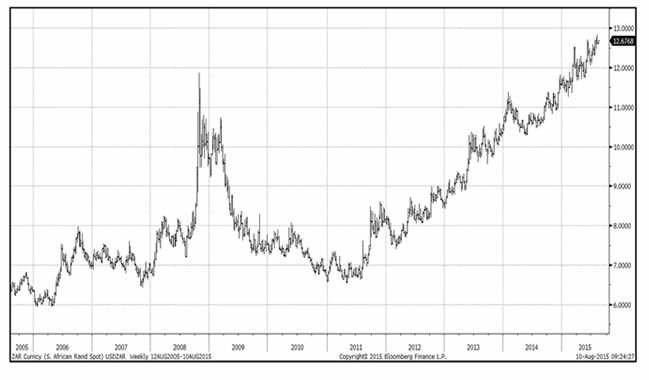 “Substantial appreciation has been seen already for pairings such as USD/BRL and USD /ZAR since the last base in 2011 but while an argument can be made for 2015 being the penultimate year of this macro USD bull cycle further sizeable gains cannot be ruled out before an awaited downside reversal unfolds some time during 2016,” notes Lucy Lillicrap at AFEX.

Lillicrap points out that characteristically such trends end with a climactic or “blow off” period which suggests sharply accelerated gains are still in the pipeline for at least some of these pairs.

The outlook thus favours the US dollar over the rand with the advent of the interest rate raising cycle in the US providing the fundamental underpinning for USD advances.

“No major bottoms have yet been posted for EUR/USD or GBP/USD either but it is plausible to suggest that much of the downside risk, particularly where the Euro is concerned, has been realised already,” says Lillicrap.

Indeed with market attention switching more towards the Swiss Franc in recent weeks gains for both GBP/CHF and EUR/CHF will probably continue to add at least some relative support to both these local currencies.

Since the USD/CHF recovery cycle is still in a relatively early stage it follows that it should continue to attract focus away from the previously beleaguered Euro.

More on the Yuan Devaluation

The PBoC decision to lower the value of its currency affected most Asian regional currency exchange rates with the Australian dollar, New Zealand dollar, South Korean won and Taiwanese dollar down more than 1% versus the US dollar.

The highly China sensitive Aussie dropped as much as 1.80% versus the greenback, as NAB Business condition fell to 6 from 10 a month earlier, while the NZD/USD fell 1.30%.