The Rand has won respite from recent heavy selling this week as a retreating Dollar turns USD/ZAR away from a key pivot level on the charts, leaving its medium-term downtrend intact and keeping alive the possibility of further gains ahead for the South African currency.

The Rand appeared to overlook on Tuesday data from Statistics South Africa showing the unemployment rate rising to 34.4% during the second quarter, from 32.6% previously, a period in which restrictions of business activity and social contact were reimposed.

South Africa’s Rand rose against all in the G10 bucket of major currencies and was pipped to the post of outperformer by only the Brazilian Real in the major emerging market space as the U.S. Dollar gave back some of its hefty gains from last week.

“Focus has shifted somewhat away from Covid, as China gets back to zero cases,” says Kit Juckes, chief FX strategist at Societe Generale.

“None of this amounts to much, and won't stop the market focusing mainly on Jackson Hole (which may well be a non-event for markets) while ignoring the signs that European data are holding up better than US data,” Juckes adds.

Price action comes ahead of an eagerly-awaited speech from Federal Reserve Chairman Jerome Powell on Friday that may be encouraging Dollar bulls to take a breather, given the U.S. currency’s recent strength. 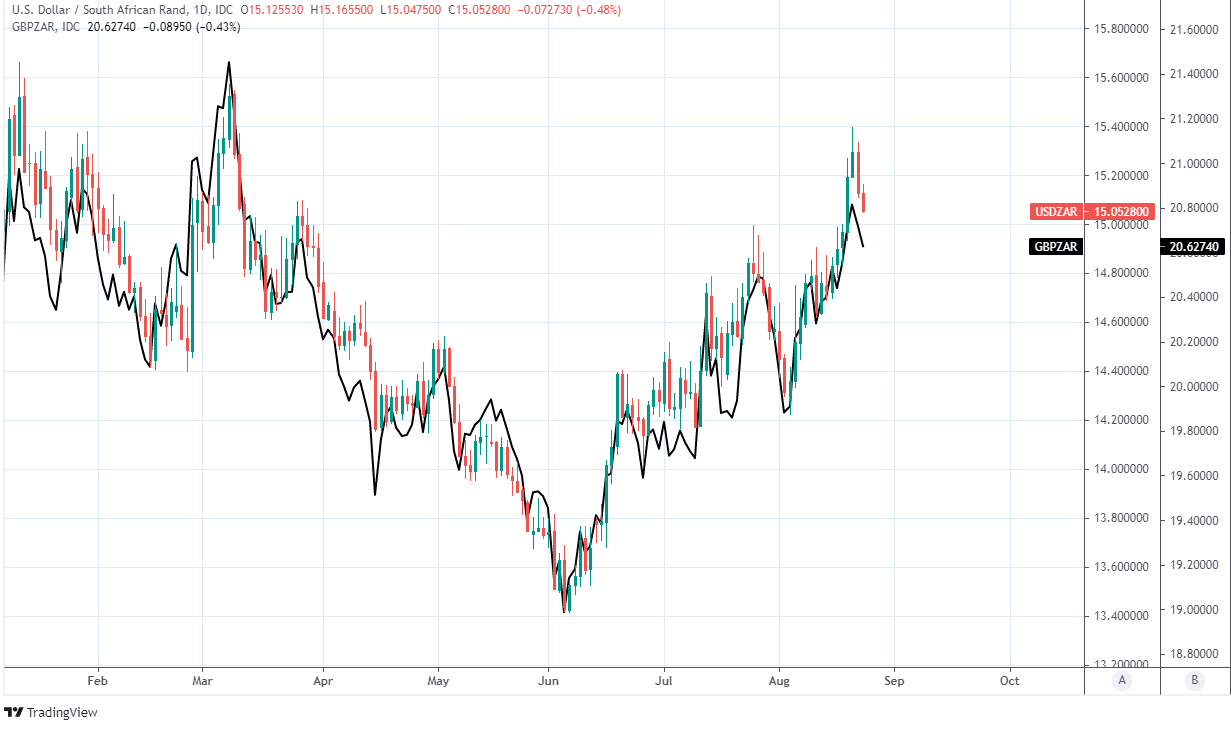 Above: USD/ZAR shown at daily intervals with GBP/ZAR.

Friday’s 15:00 speech is the highlight of the global calendar this week but not the only factor at work in the market where a recovery of risk appetite may have been supported over Monday and Tuesday by the developments in China.

China’s latest coronavirus outbreak has been curbed and Peoples’ Bank of China Governor Yi Gang was quoted Tuesday saying that credit supply would likely recover with the economy in the coming months, which could be positive for South Africa’s economy given the trade relationship between the two.

But developments at the International Monetary Fund (IMF) may be underappreciated as a possible influence on the Rand and market this week after the entry into force of some $650BN of new Special Drawing Rights (SDR).

“This means about US$275 billion is going to emerging and developing countries, of which low-income countries will receive about US$21 billion – equivalent to as much as 6 percent of GDP in some cases. SDRs are a precious resource and the decision on how best to use them rests with our member countries,” says Kristalina Georgieva, managing director of the IMF, in a Monday statement.

SDR allocations enable members to draw newly created international reserves equal to their subscribed share of the overall fund, in either or a mixture of U.S. Dollars, Japanese Yen, Euros, Chinese Renminbi or Pounds Sterling.

Those SDR currencies all underperformed major and emerging market counterparts alike this week and the new allocation may be one reason why.

Special Drawing Rights are often used to supplement central bank foreign exchange reserves although there are no restrictions on, or requirements for how the latest issuance is to be used, and it’s possible if-not likely that some of it has already been drawn and swapped for local currencies.

But a more durable influence for the Rand, Dollar and other currencies could come this Friday when Fed Chairman Powell addresses the Jackson Hole Symposium of central bankers, as the speech may be relevant to the Fed policy outlook and could potentially call a halt to the Dollar’s renewed decline.

“A more cautious sounding approach on US monetary policy, and implications for asset purchases would assist the rand, which has seen some strength in relief today,” says Annabel Bishop, chief economist at Investec. 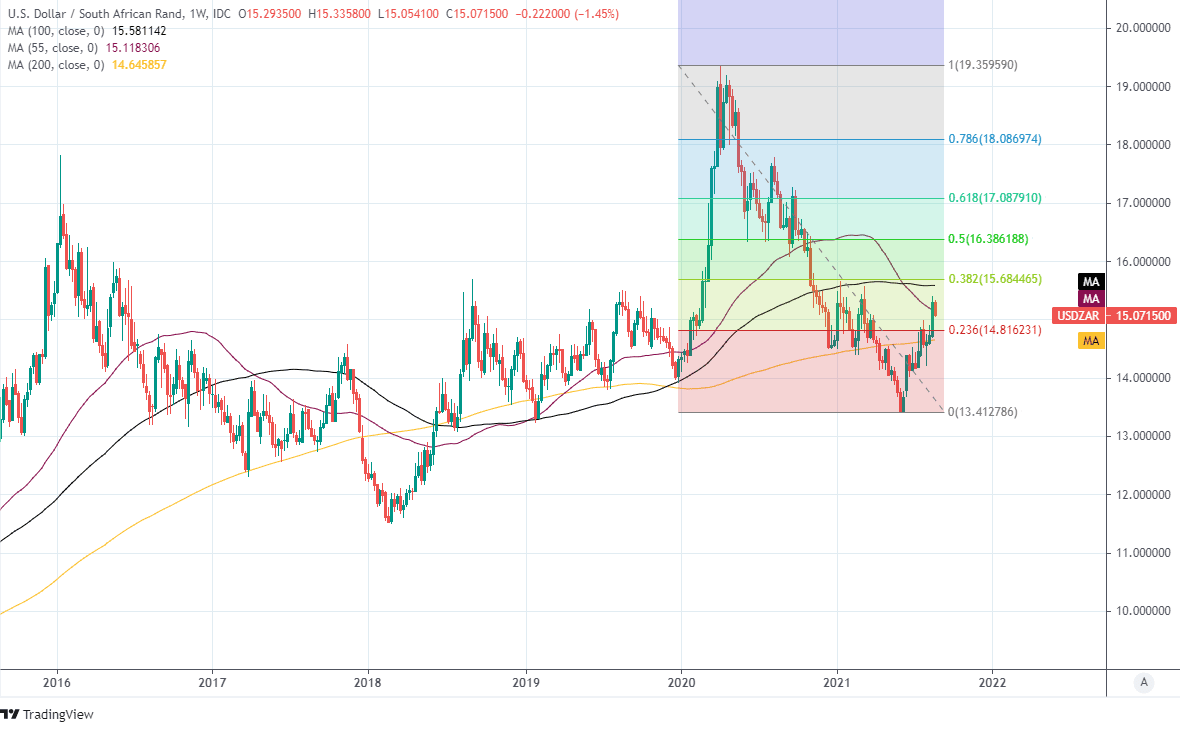 Above: USD/ZAR shown at weekly intervals with major moving-averages and Fibonacci retracements of corrective fall from March 2020 indicating possible resistances.

Some analysts and economists have questioned whether the Fed would really pack away its crisis-fighting policy tools at a point when emergent editions of the coronavirus have triggered new outbreaks and prompted fresh containment efforts in many countries lately including those which had previously succeeded in fending off the disease, in turn placing question marks over the global economic outlook.

Previously the Dollar had been lifted sharply by not only souring investor sentiment but also the seemingly growing likelihood of a Fed decision to begin winding down its quantitative easing programme before year-end, and any suggestion from Powell on Friday that this is the case could potentially see the Dollar shifting back onto its front foot and the Rand weakening anew.

Such an outcome would see the 15.68 level of USD/ZAR and its surrounding area back in focus among Rand traders, and potentially under threat, which would have bearish implications for the medium-term outlook for the South African unit given that it’s a major technical pivot point on the charts.

While below 15.68 USD/ZAR will remain in a corrective downtrend from its 2020 highs that is bearing down on a much broader and more longer-term trend of depreciation in Rand exchange rates that had lifted USD/ZAR from 11.50 in February 2018 to a peak of 19.37 last year. 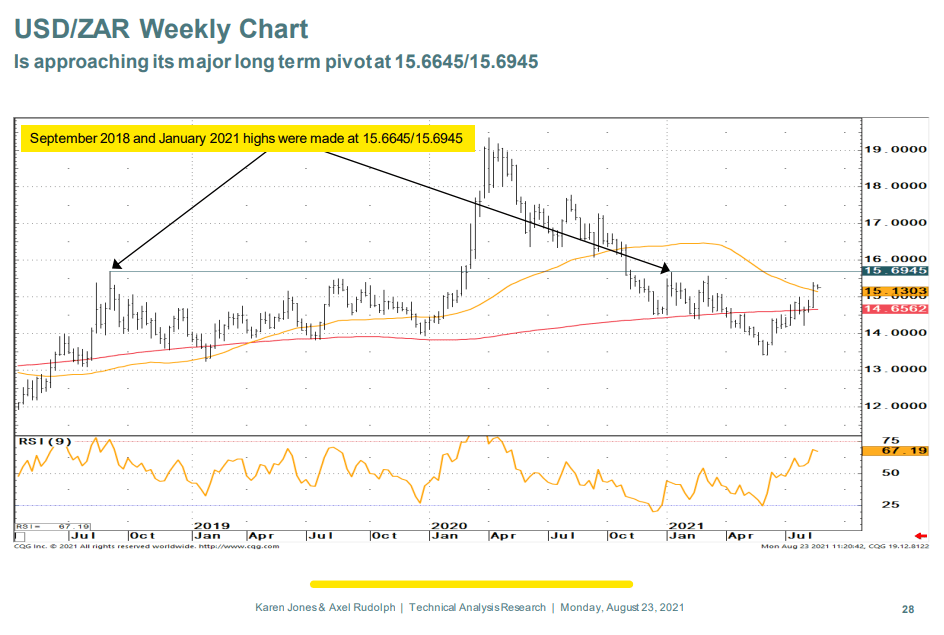