The Rand has weakened in response to a turn higher in the U.S. Dollar that has pushed it beneath key levels of support on the charts and cultivated risk of further losses in the process, some of which could potentially lift GBP/ZAR back to 20.82 or above over coming days.

South Africa’s Rand was underperforming major developed and emerging currencies alike for the week by Tuesday having gotten little help from a government decision at the weekend to relax coronavirus-inspired restrictions on activity.

President Cyril Ramaphosa announced on Sunday that South Africa would move down the ‘lockdown’ ladder this week in shifting from Alert Level 4 to Alert Level 3, although USD/ZAR has since confirmed a move above its 200-day moving-average 14.73 to reach new highs early this week.

“The rand, after nearing the 15.00 level against the US dollar yesterday, opens slightly stronger at 14.79 but is likely to experience choppy trade over the next few days as the world awaits the latest FOMC decision,” says Siobhan Redford, an economist at Rand Merchant Bank.

USD/ZAR has since climbed further and above technical resistance levels at 14.80 and 14.81, which coincide with Fibonacci retracements of the 2021 downtrend and the move lower from last year’s crisis-inspired peak near 19.34 respectively.

Above: USD/ZAR shown at daily intervals with 200-day average and Fibonacci retracements of 2020 downtrend indicating resistance for USD and support for the Rand.

Dollars have bought widely of late and the greenback remained on its front foot ahead of Wednesday’s policy decision from the Federal Reserve, and the risk is that the U.S. unit continues to advance.

Technical analysis from Societe Generale suggests USD/ZAR is likely to continue on an upward path to 15.10 over the coming days in price action that would also have implications for the GBP/ZAR rate.

The Pound-to-Rand rate is derived from international differences in the cost of Dollars and so at all times reflects relative price action between USD/ZAR and the main Sterling exchange rate GBP/USD, which was trading around 1.3788 on Tuesday.

There’s some chance the Pound-to-Rand rate could ultimately stop short of 20.82 however, because in any market where Dollar strength is pushing USD/ZAR higher the main Sterling exchange rate GBP/USD could also be likely to come under pressure. 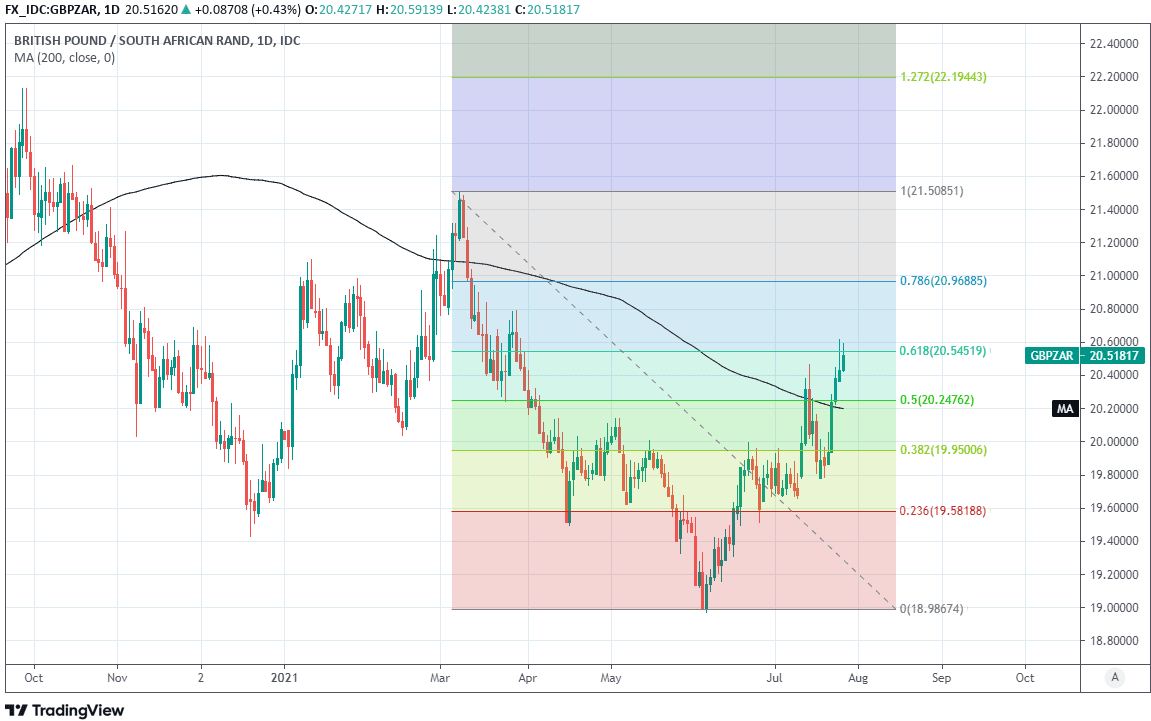 Any pressure on GBP/USD would impose a mechanical limitation on GBP/ZAR.

The rub for the Rand is that if technical analysts from Commerzbank are right then GBP/ZAR could potentially be on course for levels above 21.00, which haven’t been seen since October 2020, as they tip USD/ZAR to reach the 15.66-to-15.69 area over the coming weeks.

“The Dollar has been strengthening for weeks now, the question is – does it have the legs to break through key resistance and reassert its bull move or not? Our analysis suggests not, but we will need more evidence to persuade us that another leg lower is likely to ensue. Muddying the outlook is persistent weakness in some EM currencies such as the South African Rand and the underperformance of the Norwegian Krone,” says Karen Jones, head of technical analysis for currencies, commodities and bonds at Commerzbank.

“The South African Rand is weak and needs to go back on the radar as USD/ZAR is in the process of eroding the 23.6% retracement and the 200-day ma and should head up to the pivot at 15.66/69,” Jones says.

At the above level of USD/ZAR the Pound-to-Rand rate would rise as far as 21.30 even if the main Sterling exchange rate unravelled back to last week’s 2021 lows in interim, and would go higher still if GBP/USD manages to avert such declines. 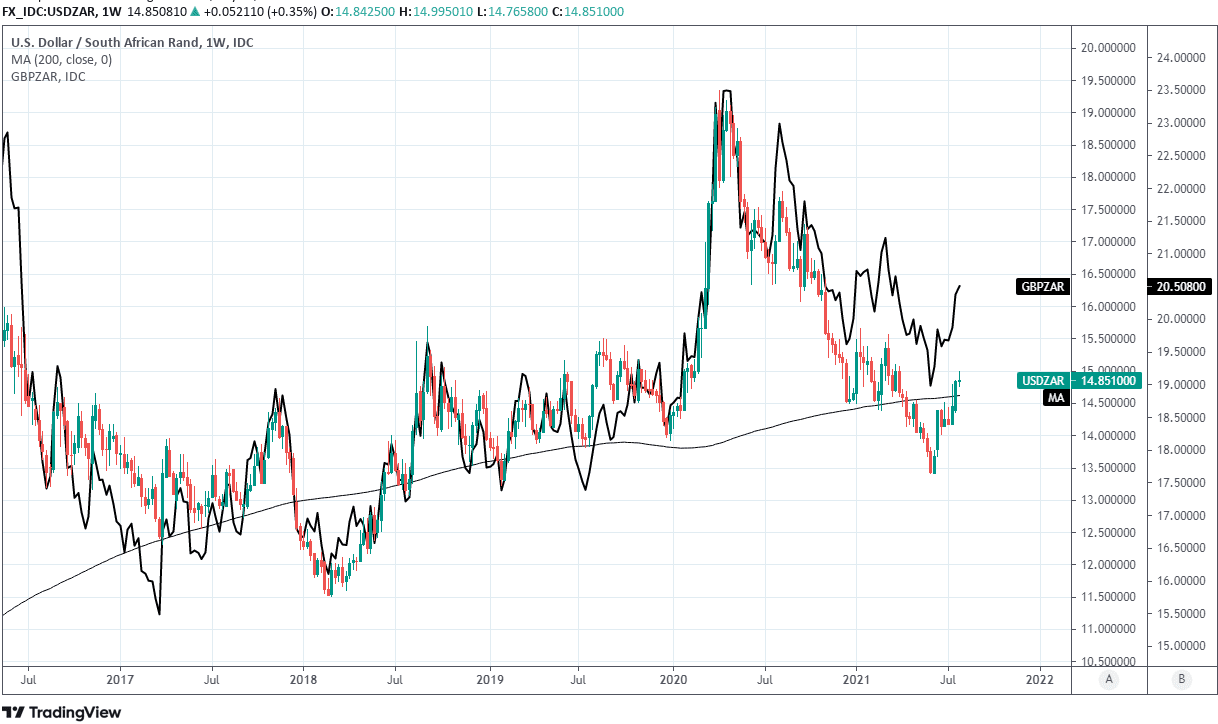 Above: USD/ZAR shown at weekly intervals with 200-week moving-average and alongside GBP/ZAR.