- ZAR finding its feet as dust settles after civil unrest
- But USD in driving seat, advancing & lifting USD/ZAR
- Resistance at 14.70/14.80 in crosshairs as SARB looms

The Rand has begun to find its feet with the dust settling on recent unrest in South Africa, although its resilience is being further tested by an advancing Dollar, which has lifted USD/ZAR back toward pivotal levels ahead of Thursday’s South African Reserve Bank (SARB) policy decision.

South Africa’s Rand ceded ground to the Dollar again on Wednesday though not to the same extent as many of the major currencies, which led the Rand to notch up gains over a majority of that grouping while also rising against a handful of emerging market currencies like the Mexican Peso.

The Rand has risen against half the G10 major currencies throughout the week including the Pound, seemingly drawing a line under the destruction and disruption that was seen during last week’s civil unrest.

“For now, equities have bounced back with better-than-anticipated volumes traded in the resources on Tuesday. The main catalyst being the expected dividend payouts from resource companies that benefited from the value effect of higher commodity prices in 1H21” says Nema Ramkhelewan-Bhana, head of research at Rand Merchant Bank.

“While vulnerable to local events, the rand remains a primary derivative of global happenings,” Ramkhelewan-Bhana adds.

Despite the Rand finding its feet against other currencies, USD/ZAR has climbed this week as the Dollar continues its advance against developed and emerging market currencies alike, bringing the main South African exchange rate closer to levels which could be pivotal for its outlook. 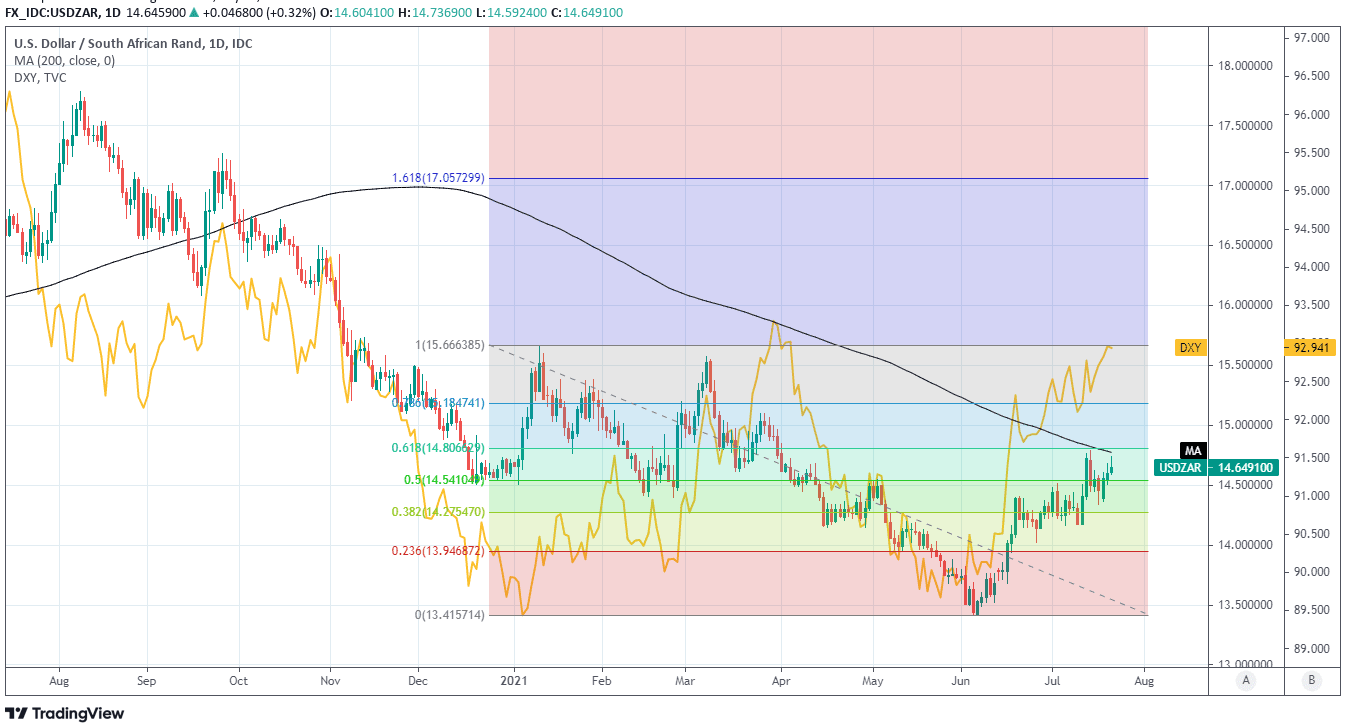 Above: USD/ZAR shown at daily intervals with 200-day average in black, Fibonacci retracements of 2021 fall and U.S. Dollar Index (yellow).

“USD/ZAR’s rally off the June low at 13.4066 has taken it to the current July high at 14.7889 which has been accompanied by negative divergence on the daily [relative-strength-index], making us stick to our neutral outlook while the 200 day moving average at 14.8107 as well as the late March high at 15.1004 cap on a daily chart closing basis,” says Axel Rudolph, a senior technical analyst at Commerzbank.

Dollar gains have placed USD/ZAR on course to test again the overhead resistance levels that had successfully called a halt to the Rand’s sell-off last week, which include the 200-day moving-average of the exchange rate at 14.77 and the 61.8% Fibonacci retracement of the 2021 downtrend.

Any move above those levels could potentially expose the Rand to the risk of further losses as USD/ZAR would then have a clear path ahead of it back toward 15.00, and leaves the Rand in a potentially vulnerable position ahead of Thursday’s July monetary policy update from the SARB.

The SARB is due out at 14:00 London time and will be scrutinised closely by the market for insights into how June’s tightening of coronavirus-related restrictions is impacting the economic outlook, as well as indications of whether the SARB is any closer to raising interest rates.

“Economic growth concerns are likely to dominate, as the enforcement of restrictions in response to the country’s third wave of infections as well as the disruption stemming from the protest action have together dimmed the recovery prospects,” says Kamilla Kaplan, an economist at Investec.

The Reserve Bank sets interest rates with the aim of influencing economic supply and demand in order to keep inflation contained within a 3%-to-6% target band and given the current condition of the economy, as well as well-contained inflation levels, economists widely expect the cash rate to be left unchanged at 3.5% on Thursday.

This is after Statistics South Africa data showed on Wednesday that the main inflation rate fell in June, from 5.2% to 4.9%, taking it back toward the midpoint of the SARB’s target band while core inflation - which often garners more attention from central bankers because it overlooks changes in volatile energy prices - rose from 3.1% to 3.2% but not by enough to lift it far from the bottom of the target band.

“The SARB is likely to reiterate that the focus will remain on second-round effects, for instance from a higher oil price or a depreciated rand, for the emergence of sustained upward price pressures,” Investec’s Kaplan says.

Previously the Reserve Bank had warned that inflation risks were tilted toward the upside and that risks to the economy were on downside, while the bank’s quarterly projection model continued to advocate a 25 basis point increase to the bank’s benchmark interest rate in each of the second and fourth quarters, which would take the cash rate up from 3.5% to 4% by year-end.

Governor Lesetja Kganyago was reported to have told an investment conference last month that the bank would likely lift its interest rate if exchange rate pressures or any other factors lifted South African inflation from its currently-contained levels, which is a message that could potentially support the Rand if repeated this week. 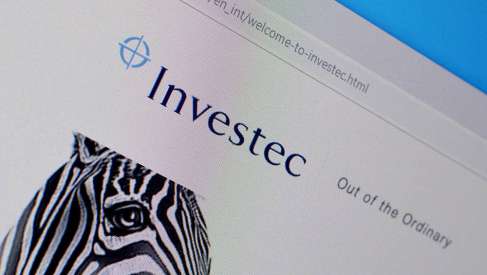 Rand "Likely to Remain Under Pressure During 2022" - DG Capital