The Rand beat a hasty retreat from the Dollar and Pound again on Wednesday as the underperformance that characterised month-end returned at the midpoint of the new week, although the correlation between USD/ZAR and the local stock market remained firm.

South Africa's Rand suffered heavy intraday losses that saw it fall into the red against Sterling for the week on Wednesday while leaving it clinging to a fractional advance over a recovering Dollar, after Tuesday's rally ended in upset near to familiar technical resistance levels.

Losses coincided with renewed load-shedding at national electricity monopoly Eskom but follow a key African National Congress meeting that saw President Cyril Ramaphosa win support for an anti-corruption drive, and a better than expected manufacturing PMI for July that was released on Tuesday.

Rand price action came amid gains in global as well as local stock markets, but also widespread declines in major economy bond yields outside of North America. The Dollar was rebounding across the board following a hat-trick of declines that pushed it to new two-year lows against a host of currencies, though not the Rand, which managed only a one-month high.

"USDZAR was probably the star of the show as it fell 1.30% in London and held onto those losses even as the dollar strengthened in NY," says the J.P. Morgan dealing desk in London. "I guess the month end GBI-EM outflows in an illiquid bank holiday caused the out sized move to the topside. I must say EMFX does feel pretty solid and my sense is that real money investors are coming back and looking for value after the poor seasonal month of August." 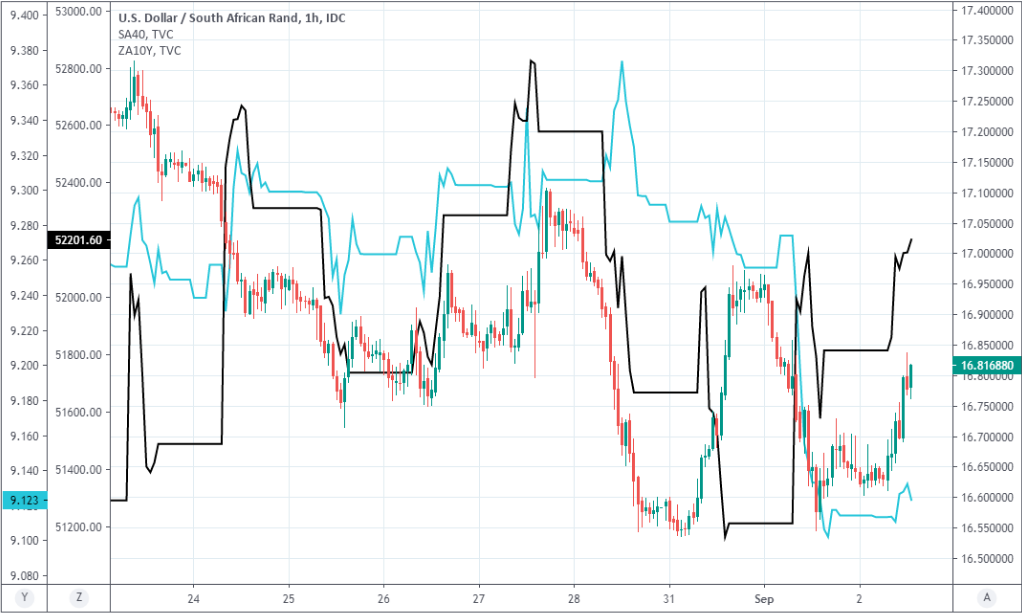 Global markets have ebbed and flowed thus far in the new week, which straddles the end of August and beginning of September, although one thing that's remained consistent throughout is the lockstep movement between USD/ZAR and the index representing the top forty companies on the Johannesburg Stock Exchange.

The Johannesburg Stock Exchange was flat by the end of August while local bond yields were lower despite that foreign investors are thought to have reduced holdings of South African government bonds, although the Rand was higher by a touch against many currencies.

"Emerging market bonds have seen some decent inflows over the past few weeks, while demand for SAGBs remains underwhelming, with local data suggesting a net outflow for the month of August," says Tebogo Mekgwe, a derivatives dealer at Rand Merchant Bank.

For some kinds of foreign investors, particularly the 'real money' kind thought to be returning to the developed world, August's price action in South African financial markets would likely have required sales of the Rand by those who want to maintain constant hedge ratios. 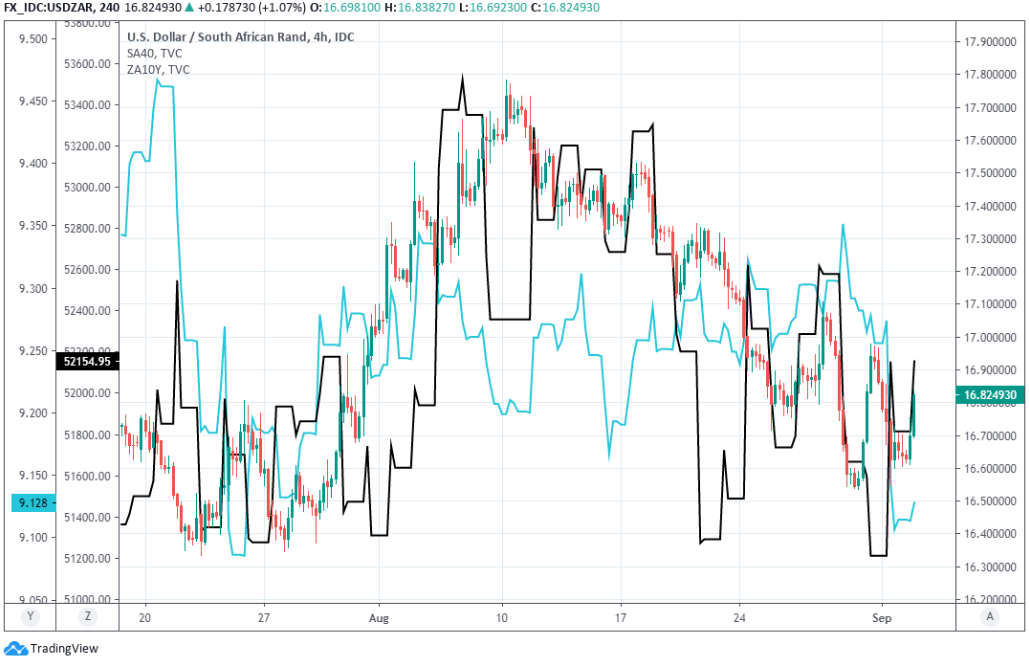 Selling the Rand in response to gains in local assets or currency can protect all or part of an investment from future depreciation. Fund managers go through this process each month while analysts dedicate much time and energy to attempts at sussing which way such flows will cut for different exchange rates.

This activity might explain the Rand's late August losses, and vice versa for local investors and the domestic stock markets in the intervening periods. Some locals frequently use shares of multinational companies listed on the JSE as hedges for their own exposure to the volatile domestic currency.

Ultimately, however, there's no telling for certain whether or which of these explains late August and early September price action and in any case, the Rand's period of outperformance was a short-lived one as the South African currency remains deep in the red against most counterparts for 2020.

"The JSE All Share Index (JALSH) too has recouped most losses since March/April, arguably assisted by rand-hedges and/or primarily non-SA stocks. This, and our constructive rand outlook, too should support financial conditions. However, concrete policy measures are needed to boost business and consumer confidence," says Thanda Sithole at Standard Bank.

Firmly in the frame for the Rand's lingering 2020 underperformance are the debilitating state of the public finances, crumbling energy infrastructure as well as long and ongoing market concerns over governance, not to mention the greatly reduced level of government bond yields. 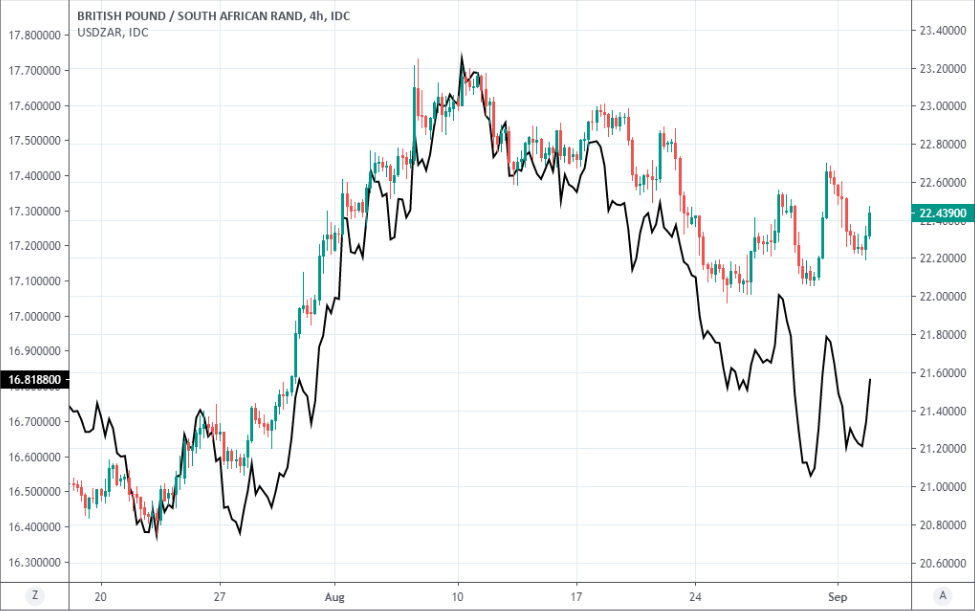 "The scope for more SARB rate cuts to support growth is limited with inflation expected to rise back above 3.0%. On balance, we see little scope for further sustained rand gains in the year ahead," says Lee Hardman, an analyst at MUFG, who sees USD/ZAR at 16.80 by year-end and GBP/ZAR at 22.65.

Weak public finances and an economy that was fragile at the best of times even before the pandemic have accentuated the need for significant and ongoing monetary support by the South African Reserve Bank (SARB) that is expected to weigh heavily on bond yields and investor returns for years yet.

This is why many expect the Rand will struggle to advance beyond recent highs while forecasts, more often than not, warn of renewed weakness against other developing world currencies as well as non-Dollar major currencies.

"South Africa’s economic fundamentals are notably weak, particularly its government finances - with political opposition from some quarters to fiscal consolidation. Further structural weaknesses include insufficient electricity supply and poor governance in various municipalities, state institutions and SOEs in the past decade, and still ongoing at some. Furthermore, South Africa has stifling state driven regulations in the industrial production sector, insufficient labour market flexibility and poor public health and education outcomes, while it is also fiscally constrained and has seen notable wastages of public finances, along with inefficiencies and corruption. This has all contributed to depressing business, and so consumer, confidence," says Annabel Bishop, chief economist at Investec. "A continued weak economic growth environment will enforce further credit rating downgrades and weaken the rand."