The Rand wobbled alongside other risk currencies Tuesday while new, upgraded forecasts from Goldman Sachs suggest the South African unit may already have peaked after a three week rally against the Dollar and Pound.

South Africa's Rand ceded ground to the Dollar and Pound Tuesday as risk appetites were tempered ahead of Wednesday's Federal Reserve (Fed) policy update, the detail of which will be decisive in determining whether the raucous recovery in stock markets continues without meaningful setback. Markets are looking for Chairman Jerome Powell to commit to keeping the Fed's foot pressed hard on a metaphorical monetary policy pedal that's been pushed to new extremes to combat the coronavirus pandemic.

The Fed policy response has been instrumental in driving the equally historic stock market recovery off March lows and in turn, picking emerging market, commodity-sensitive and generally risky currencies up off the floor in recent months. The bank's yield-crushing policies have lifted the risk premiums paid to investors who own shares and have made a text book argument in favour of higher valuations multiples, even though the global economy is still in a hole, which has helped lift currencies like the Rand.

This and the large 4% gains for major equity benchmarks in the last week are an argument for caution among investors and traders ahead of Wednesday's 19:00 announcement, especially as some analysts say the Fed could struggle to deliver a sufficiently supportive message this week. But even if the risk rally does resume, new forecasts from Goldman Sachs suggest the South African Rand is close to what could be its peak for the next 18 months.

Above: Pound-to-Rand rate shown at daily intervals alongside USD/ZAR.

"Since late April, the Rand has led a broader EM FX rally, appreciating by more than 10% versus the Dollar. This outperformance is explainable, given that the high-volatility ZAR features both one of the largest  beta  to improving global risk sentiment among EM currencies, and particularly-large exposures to a continued recovery  in Chinese industrial activity. Moreover, as in its CEEMEA peers, May PMIs in South Africa show tentative signs of activity having bottomed. But, as we have long  observed, South Africa’s longer-run combination of weak growth and current account dynamics have underpinned a multi-year trend of FX weakening," says Zach Pandl, global co-head of foreign exchange strategy at Goldman Sachs.

Pandl and the Goldman team lifted their Rand forecasts last week to reflect the recovery out of its coronavirus trough and acknowledge the prospect of further strength in the short-term. The Rand has since hit the bank's three and six-month forecast of 16.75 for USD/ZAR, which is a level that's tipped to prevail as an average until year-end when the South African currency is expected to resume its longer-term depreciation.

Depreciation is expected because already-weak macroeconomic fundamentals have been exacerbated by the pandemic and now necessitate further currency weakness over the medium-term. Many cite the Rand's undervaluation as a reason for thinking it can sustain a recovery but Goldman notes this valuation has been trending lower of late.

"Long-run risks to the path of USD/ZAR still appear to be skewed to the upside, in our view. For example, while the Rand has scanned as deeply undervalued for some time, weak fiscal fundamentals in South Africa have contributed to a significant trend weakening in measures of fair value for ZAR over the post-crisis period, which we think can continue," Pandl says. 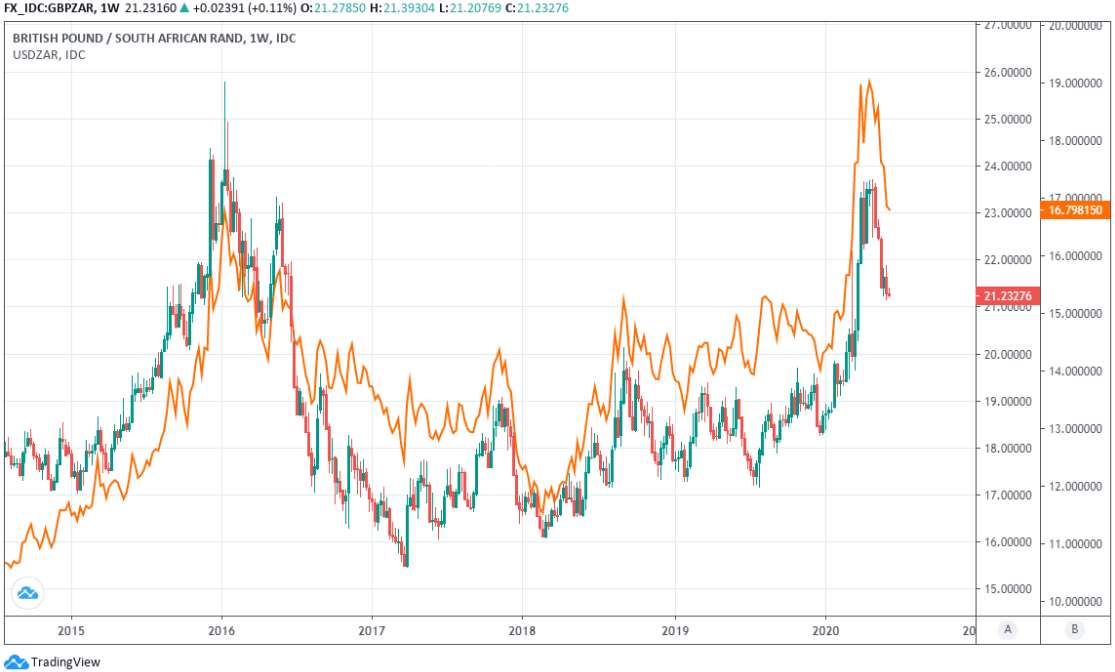 Above: Pound-to-Rand rate shown at weekly intervals alongside USD/ZAR.