- ZAR gains on USD, GBP as volatility ebbs amid upbeat market mood.
- Investors shrug off U.S.-China tensions and trade the vaccine positives.
- ZAR upside limited from here, ABN and Commerzbank forecasts show.
- 18.0 and 17.83 in focus for USD/ZAR as GBP/ZAR backs off 23.57 top.

South Africa's Rand rose more than 1.5% against the Dollar and Pound as commodity prices and other risk assets crept steadily higher while some measures of financial market volatility declined, with investors apparently preferring to view the coronavirus glass as half-full rather than half-empty.

Risk assets including the Rand have benefited this week from claims by U.S. biotech firm Moderna that it's made progress in developing a coronavirus vaccine, while largely ignoring fresh U.S.-China tensions.

Moderna lit a fire under stocks, commodities as well as the currencies that shadow them when it said one of its developmental drugs could produce antibodies to combat the coronavirus that has left people shuttered inside their homes and closed down the global economy this year.

Doubt has since been cast on the results and any vaccine might take years to mass produce so wouldn't necessarily aid the current global economic recovery, although one would reduce the long-term risks posed by the virus.

"We’re not sure the calendar of event risks is there in the near term for catalyzing market volatility, which continues to drop," says John Hardy, head of FX strategy at Saxo Bank. "But as implied volatility ebbs, longer term options become more attractive...Traders interested in volatility exposure may consider 3-month plus options that are decently out of the money in pairs like NZDUSD, AUDUSD, or AUDJPY for downside potential and USDCAD for upside potential are worth consideration if we see another major spike in volatility from US-China tensions, slower than feared Covid19 recovery or otherwise." 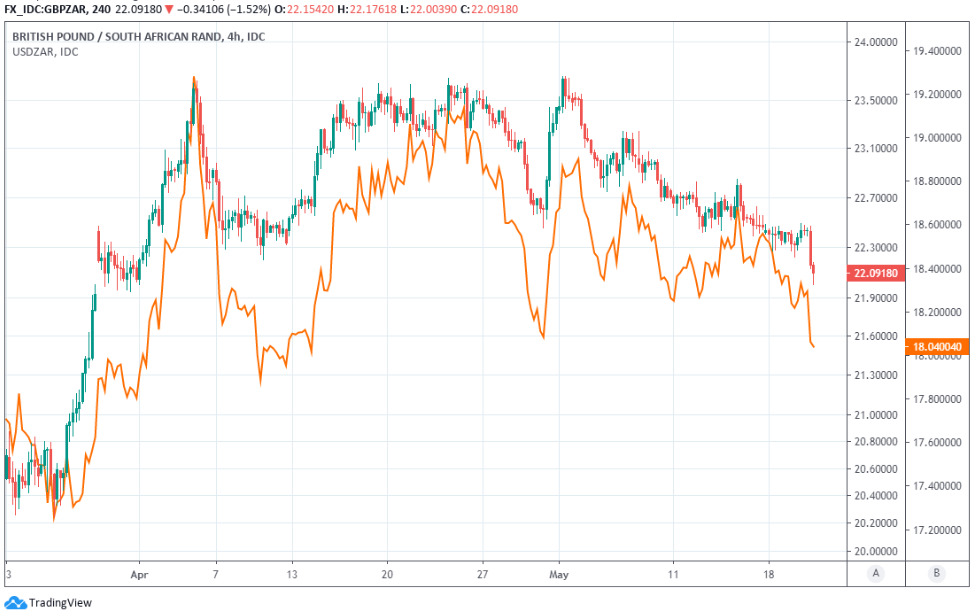 This week's rally has hallmarks of a flimsy shift in market sentiment but for the time being, many are unwilling to stand in the way of financial flows that favour proxies for risk appetite over the safe-havens that did so well in February and March. Instead some are betting on an increase in volatility through the options market, which limits the downside for investors in the event they're wrong and might suggest low conviction behind some views.

But irrespective of whether the upbeat mood and low volatility environment persists, some forecasts suggest the South African currency may already be nearing the end of its proverbial road after having heaved itself up off record lows against the Dollar and pushed the USD/ZAR rate back down to the 18 handle while consistently denying Pound Sterling a foray above the 23.57 level that guards the path to its own record highs set back in January 2016.

"USD/ZAR is still consolidating below its recent all-time high at 19.3418 (according to CQG data) while still targeting the 18.0108/17.8433 March 23 high and the April 9 and 30 lows. Only a slide below the April 9 low at 17.8433 would eye the March 9 high and the March 25 low at 17.1793/16.9932. While this support area underpins on a daily chart closing basis, overall upside pressure should retain the upper hand," says Axel Rudolph, a senior technical analyst at Commerzbank, in a Monday research note. 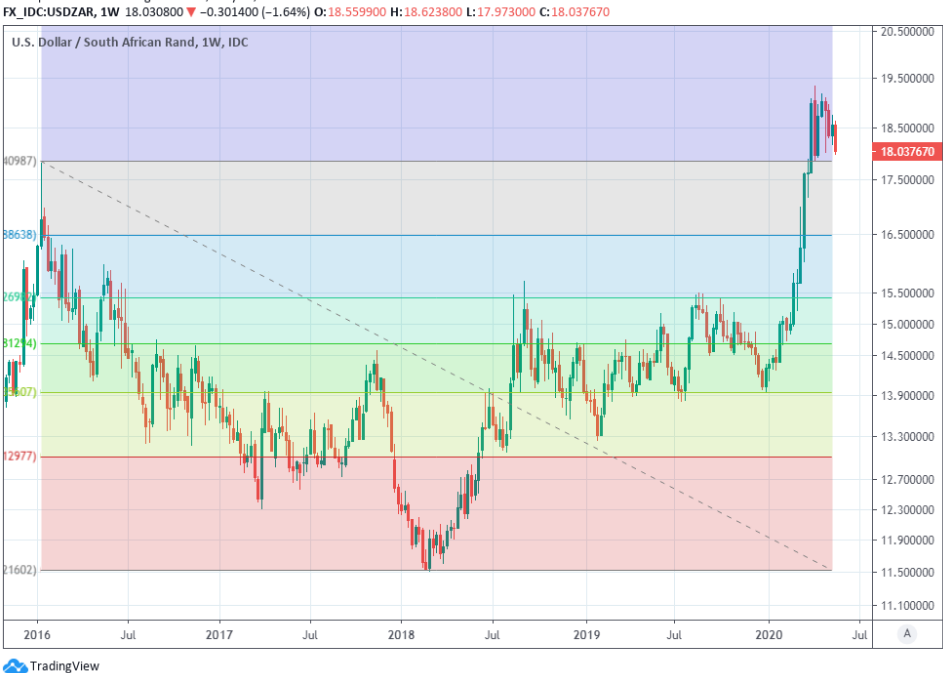 The USD/ZAR rate was testing the 18.0 handle Wednesday and eyeing a return to the April 9 low at 17.8433, which is a major technical level for the South African currency and one that's also key to price action in the Pound-to-Rand rate. The 17.84 level not only the April 09 low but also the 100% Fibonacci retracement of the January 2016 downtrend and USD/ZAR's previous all-time high that has provided the solid support to the Dollar on each dip lower since the exchange rate broke to new highs in April.

If that level gives way upon the next test then it might open the door to more gains for the Rand and further undermine the Pound-to-Rand rate, especially if Sterling continues to suffer from its own domestic troubles. The Pound-to-Rand rate needs either or a combination of strong GBP/USD gains, which many say might be unlikely, or another big spike in USD/ZAR to get past 23.57, which is the 78.6% Fibonacci retracement of the January 2016 downtrend from 25.78.

"COVID-19 has led to strong outflows of many emerging markets and to a subsequent weakening of their currencies," says Georgette Boele, a senior FX strategist at ABN Amro. "The South African rand has the tendency to weaken in an environment of risk off, weak economic outlook and low commodity prices. This time it has been no different...Real rates have also moved into negative territory. This weighs on the rand and we therefore think that another risk-off wave in financial markets will result in a lower rand." 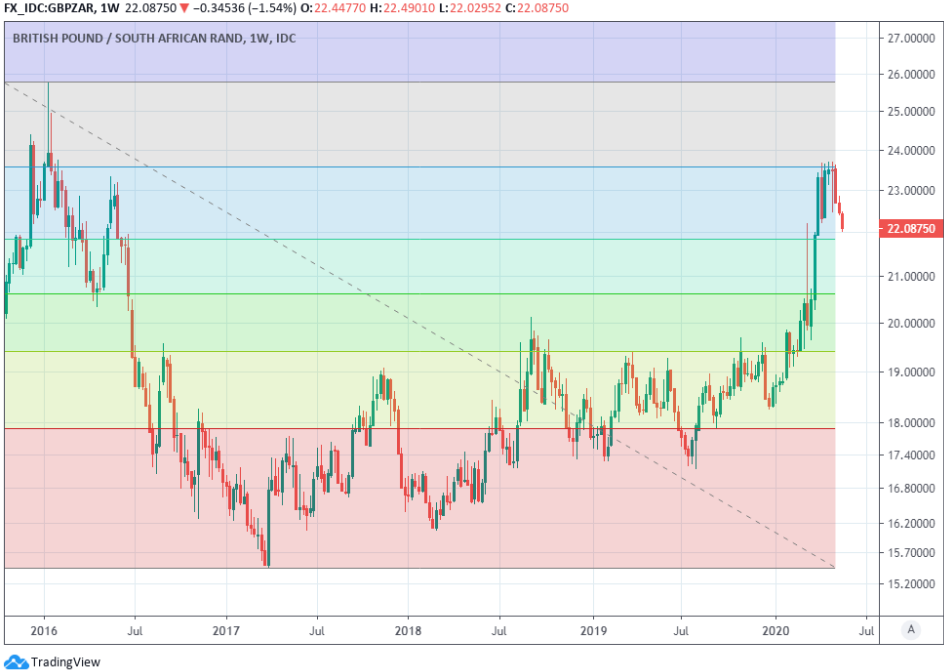 Above: Pound-to-Rand rate at weekly intervals with Fibonacci retracements of January 2016 downtrend marked out.

Boele and the ABN Amro team downgraded forecasts for the Rand this week and now look for USD/ZAR to end the year around Wednesday's 18.0 level, up from 17 previously, before recovering to 17.0 in time for the end of next year. USD/ZAR was trading around 18.48 when the forecasts were downgraded although ABN's new projections suggest any move below 18 might beshort-lived. Before, the Rand was seen falling to 16.0 by the end of 2021.

Commodity prices and investor risk appetite will be key to a sustained recovery of the, Boele says, and so too will monetary policy at the South African Reserve Bank (SARB which announces its next rate decision on Thursday. Some analysts look for the bank to cut the cash rate by a further 50 basis points to 3.75%, which would take total South African rate cuts to -2.75% for 2020 and would push the benchmark for borrowing costs further below zero in 'real terms,' in other words once inflation is taken into account.

Any Thursday decision by the SARB to delve deeper into the realm of negative real interest rates would support South Africa's long-suffering economy but might not be taken too well by the Rand given any such move would also eat away at the returns offered by the government's bonds and potentially make the Rand less attractive to investors.

"It has now used up most of its ammunition if it does not want to get into negative territory with its key rate in real terms. Further rate cut scope will therefore be mainly dominated by the medium term inflation outlook and thus depend on the oil price and exchange rate related risks. However, the downside risks are likely to dominate in the rand while an end of the corona crisis in not in sight," says Elisabeth Andreae, an analyst at Commerzbank, following the SARB's April decision. Thursday's is due at 14:00 London time.