South Africa's Rand was in retreat from the Dollar Friday as the trade ceasefire between the U.S. and China appeared to fall apart, with the two sides exchanging fire from Washington and Beijing at the tailend of a week which has seen the tensions between the world's two largest economies ratcheting higher.

U.S. lawmakers advanced a bill in the Senate Friday that will sanction China over alleged human rights abuses in Xinxiang province, while House of Representatives lawmakers contemplated another bill that provides President Donald Trump the authority to impose sanctions on China if the government does not cooperate with an international probe into the origins of the coronavirus that's closed down vast parts of the global economy.

This was after the U.S. renewed its campaign to shut Huawei out of the American market, drawing angry rebukes from Chinese government controlled media. The editor of China's Global Times newspaper, which is widely perceived in the market as an unofficial English language mouthpiece for the government, said China will retaliate against the measures using its 'unreliable entity' list. 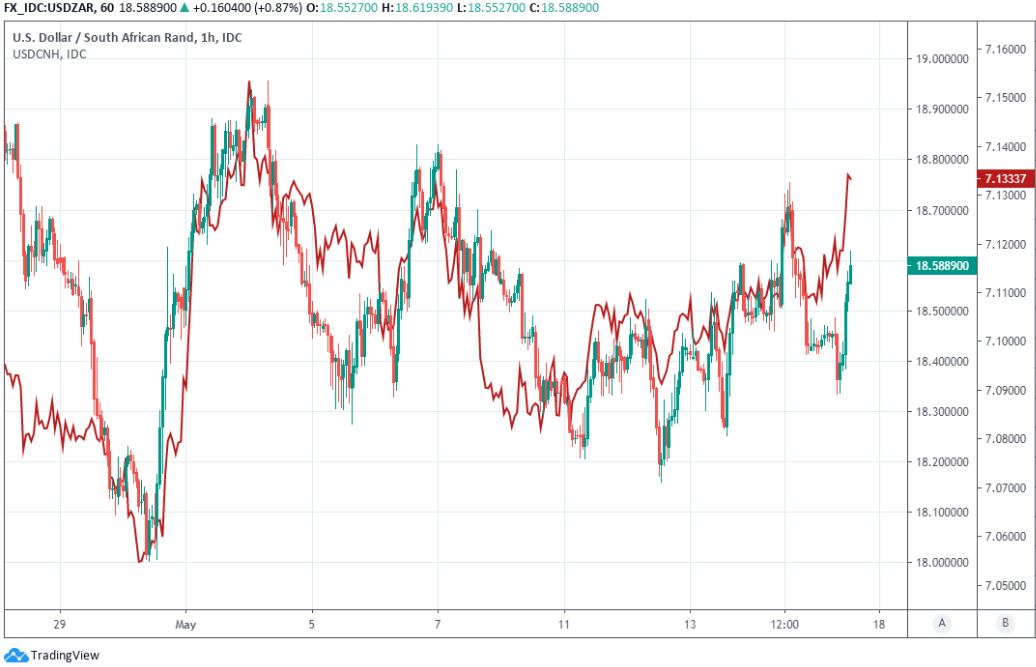 Fresh trade tensions come just as some parts of the global economy attempt to pick themselves up off the ground and at a time of vulnerability for the Rand. South Africa's currency only recently heaved itself up off record lows against the Dollar but could now face a further foray into previously uncharted territory because trade tensions are expected to drive an increase in the USD/CNH rate, which the USD/ZAR rate has a strong positive relationship.

"With many market participants apparently optimistic on the possibility of the National People’s Congress meetings starting 22 May producing new pro-growth fiscal measures that boost CNH in the process, we instead focus on the risk that either insufficient measures on that front and / or trade and political risks create the opposite effect," says Shahab Jalinoos, head of FX strategy at Credit Suisse in a research note earlier this week.

Jalinoos said earlier this week that a USDCNH test of the 2020 high at 17.17 is likely in the pipeline, which implies a sharp upmove in the USD/ZAR rate and potentially back to the record high set in early May, if the above chart is anything to go by. Others however, see the USD/ZAR rate remaining range-bound over the coming days and potentially turning lower in the weeks ahead.

"The rand market is engaged in an intense game of ping pong, clearing 18.75 against the US dollar in intraday trade, before settling back to 18.45," says Nema Ramkhelawan-Bhana, an economist at Rand Merchant Bank. "The local unit is starting to look toppish at 18.65 as the whirlwind of negative news is already embedded in EM pricing. If momentum trading carries the currency pair below the 18.25 level, then a break of 18.00 is in the offing. The US dollar index strength is a major sticking point." 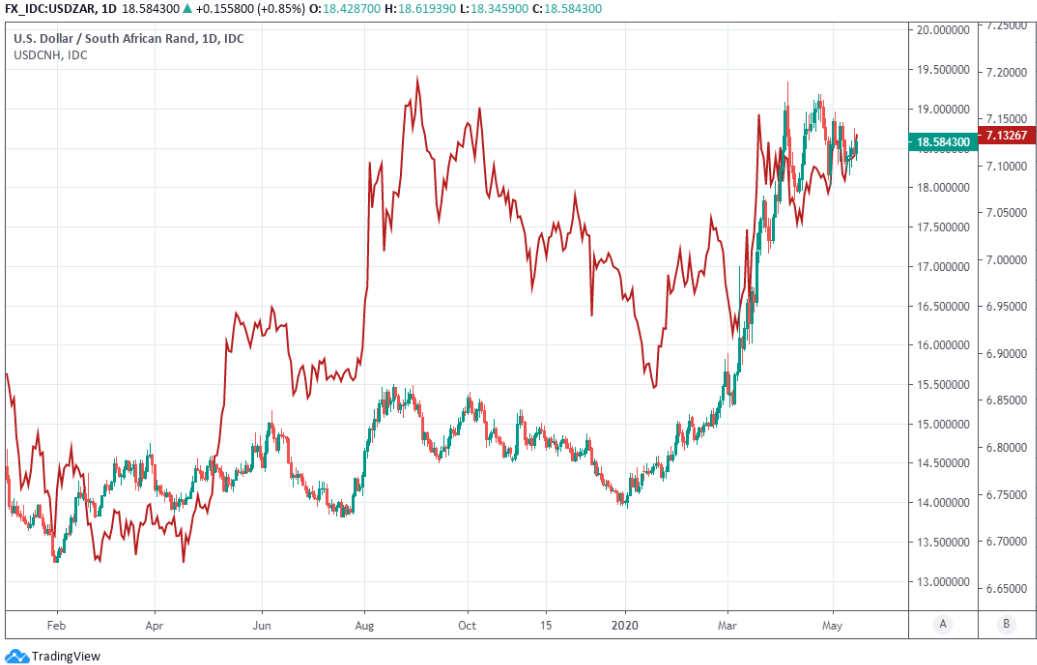 Friday's price action in the Yuan and Rand come after Chinese retail sales and fixed asset investment figures missed expectations for April, although earlier losses had been limited by better-than-expected industrial production numbers. Industrial production rose an annualised 3.9% in April when consensus were looking for only a 1.5% gain, although fixed asset investment fell by more than 10% and retail sales were down -7.5% when a -5.9% fall was expected.

The Rand's recovery off earlier May lows had stalled on Thursday as the temperature rose between the U.S. and China, with President Trump telling Fox News "we could cut off the whole relationship" at a point when the two sides were supposed to be attempting to implement the 'phase one deal' that had ended the trade war between them. However, even as that process got underway the two sides were also trading accusations over the coronavirus.

Thursday's remarks came with lawmakers legislating and citizens litigating in the courts over allegations that the Chinese government attempted to cover up the coronavirus when it first appeared in Wuhan, rather than recognise the problem and then notify international bodies as well as counterparts. Some U.S. citizens are attempting to win damages in the U.S. courts that might have implications for Chinese government assets in the U.S., and China has warned that it intends to retaliate against such actions.

"This week, we went short AUD/JPY. In addition to our more bearish global outlook than the consensus, we are increasingly concerned about US-China trade risks, as China will be unable to meet Phase One trade commitments and is facing criticism about the way it has handled Covid-19," says Adarsh Sinha, a strategist at BofA Global Research. "While the usual suspects of easing lockdowns, second wave risks and broader economic impact will shape the direction of reflation expectations, the proximate issue over coming weeks will be the US-China relationship." 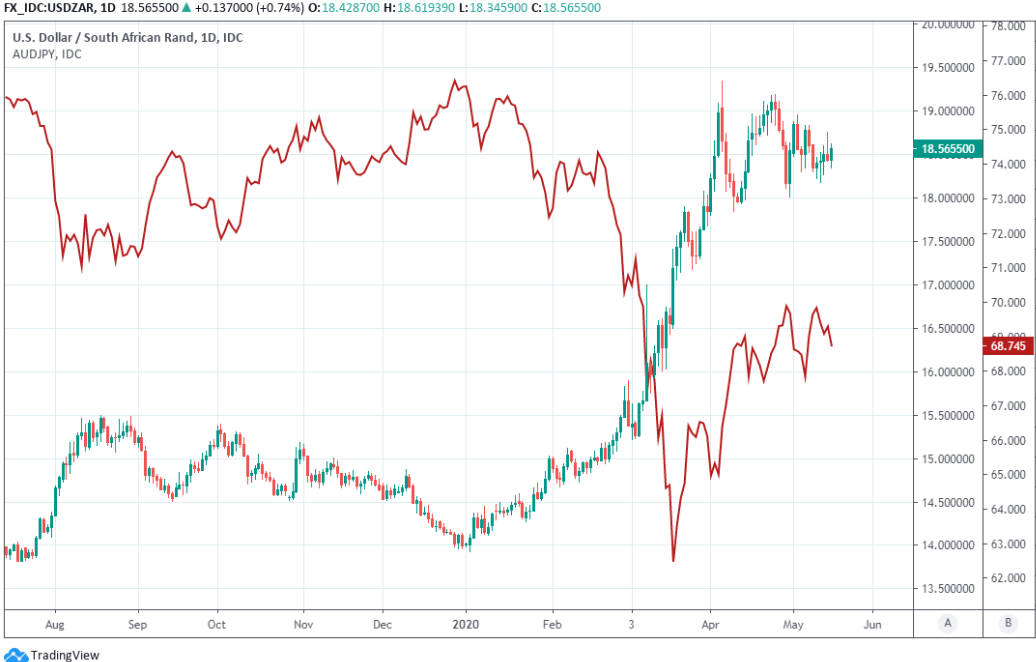