- ZAR on front foot Tuesday but it's a sell at Bank of America.

The Rand is on course for more punishing losses during the months ahead, according to technical analysts at Bank of America Merrill Lynch, who say studies of trends and momentum on the charts suggest the USD/ZAR rate will reach its highest level since for three years later in 2019.

South Africa's Rand is expected to weaken over the coming weeks and months as the downtrend gains momentum on the charts according to Bank of America, although the U.S. firm is not alone in its bullish outlook for the USD/ZAR rate. This in turn, could mean the Pound-to-Rand rate is also set for further gains. 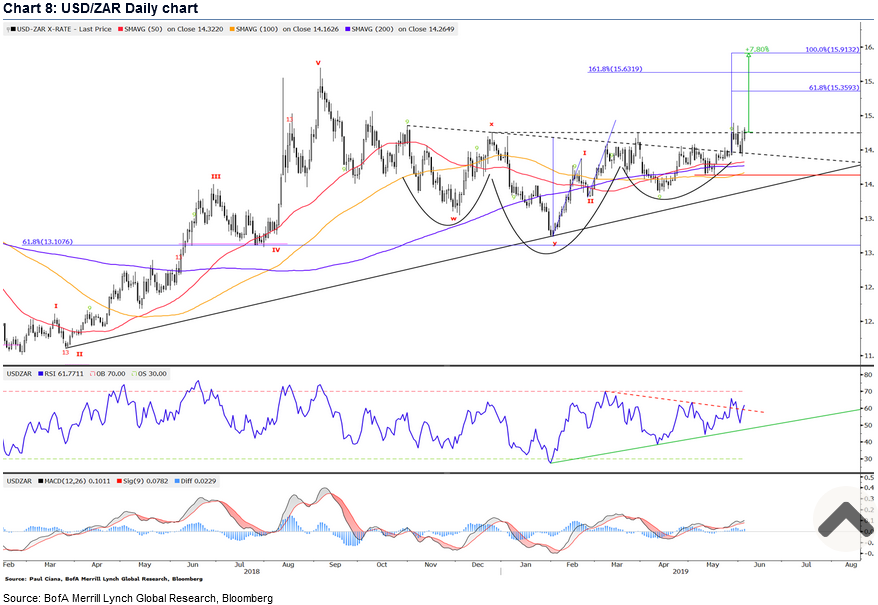 Germany's Commerzbank has also said this week the up move in that exchange rate, which implies losses for the Rand, is set to continue. However, the bank's analysts see a short period of consolidation beneath last week's highs as being likely before the northward march resumes.

"USD/ZAR’s recent surge higher has taken it to its current June high at 15.1642 below which it is currently consolidating. We expect to see further consolidation below this high in the course of this week. The December, January and March highs at 14.7471/14.6795 are likely to be revisited," says Axel Rudolph at Commerzbank. "Only a drop below the current June low at 14.4044 would make us bearish, however, and put the May trough at 14.1266 on the cards." 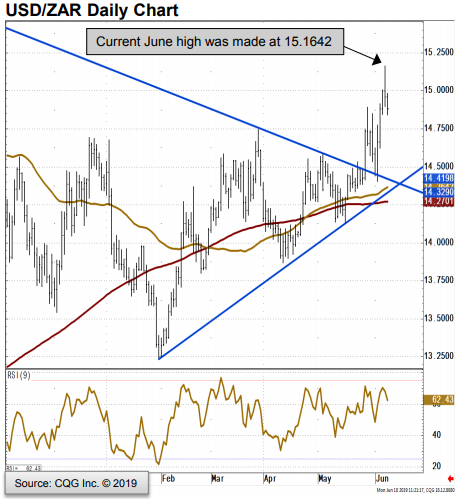 "Either the markets have missed the headline relating to the additional R300bn in spending that Eskom might incur if legally instructed to comply fully with the emission standards at all plants or have assumed it to be par for the course," says Nema Ramkhelawan-Bhana at Rand Merchant Bank, in a note to clients.

Bearish signals are coming off the Rand charts at a time when the fundamental outlook is also becoming more challenging given recent developments in the economy, which are posing a threat to South Africa's last remaining 'investment grade' credit rating.

First-quarter GDP growth surprised sharply on the downside last week, stoking fresh fears for the Moody's credit rating, and some local analysts are suggesting there could more trouble in store on the path ahead.

Eskom is a major threat to the South African public finances and Rand because the government is on the hook for more than R350 bn of its debt and there appears to be no end to the financial demands of the cash-strapped and troubled utility provider.

"The latter is of much greater concern as it suggests a growing level of indifference toward the SOE burden on the state. We’ll assume the former, which could imply a slight reversal in the rand’s overnight fortunes," Ramkhelawan-Bhana adds. 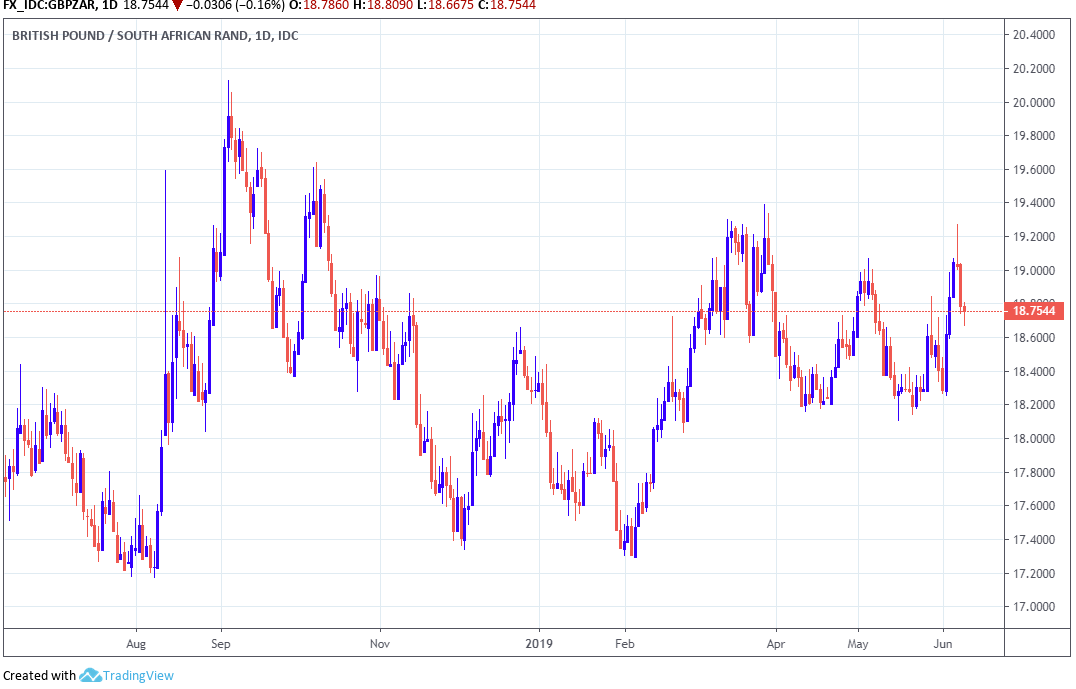 The Rand entered Tuesday's European session on its front foot following an upbeat performance during the Asian trading day but Rand Merchant Bank fears this upbeat performance is liable to be unwound if the market gets wind of another financial challenge for Eskom.

Moody's, the last major rating agency to have South Africa as an 'investment grade' credit prospect, has identified governance and the weak financial positions of state-owned-enterprises as among the things it's watching.

"With leading indicators yet to bottom, market participants remain highly disillusioned by recent high-frequency data. Regardless of the stabilisation in electricity supply, they are cognisant that underlying activity still remains weak," says Ramkhelawan-Bhana. "There’s little additional support for the rand, which should trade around a mid-point of 14.80 today." 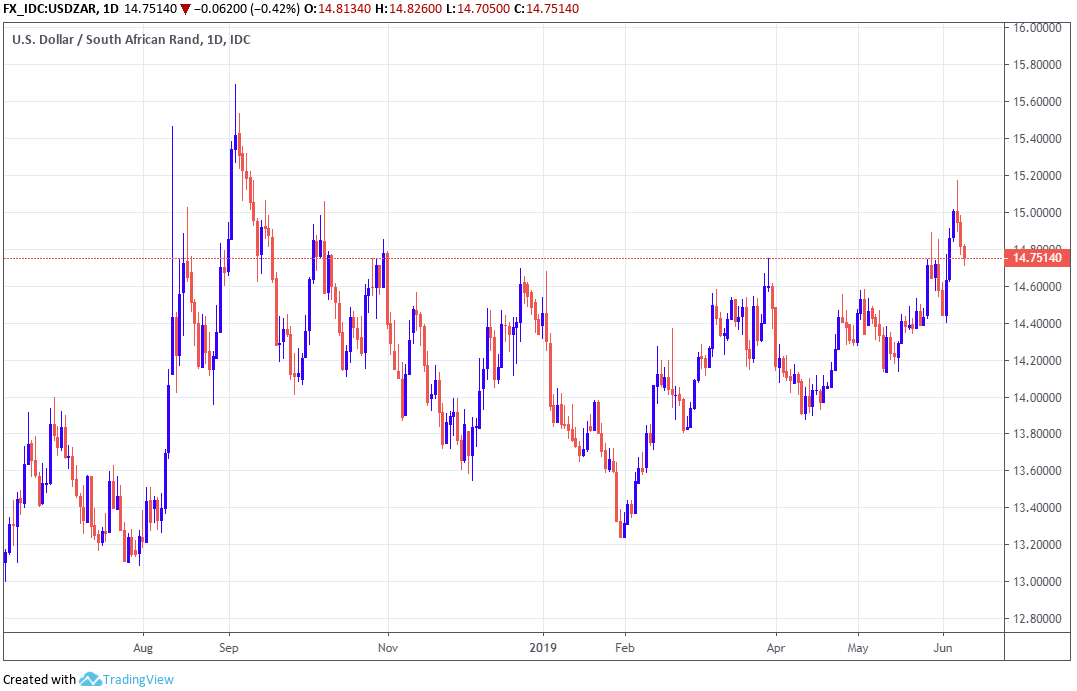 The Rand has seen a volatile second quarter as investors have had to contend with not only the outcome of 2019's general election, but also the opposing forces of a weakening domestic economy and a U.S. Dollar in outright retreat amid market bets against the Federal Reserve (Fed).

With the U.S. economy also showing signs of weakening, financial markets are betting with increasing conviction the Federal Reserve will begin cutting its interest rate from the current post-crisis high of 2.5% before long, which has weakened the Dollar in recent weeks.

That should be good news for the Rand and economy because it was the strong Dollar of 2018 that raised funding costs for South Africa's government and import costs for companies and consumers, but short sellers are still winning the tug-of-war in the currency market.